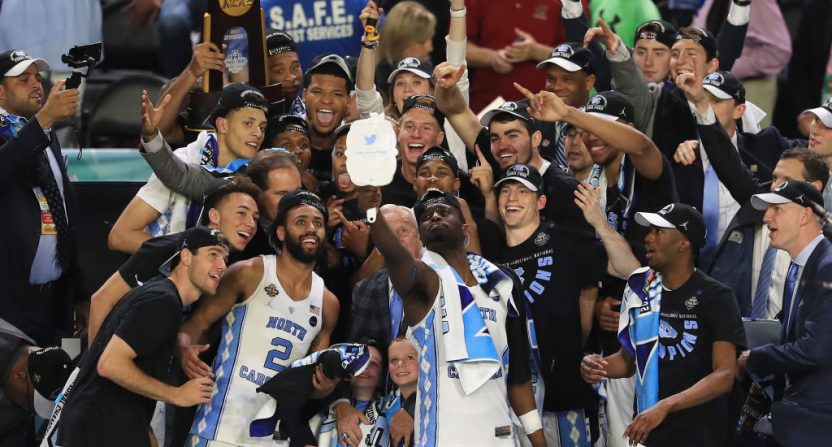 For most of the night Monday, the North Carolina Tar Heels – Gonzaga Bulldogs NCAA men’s basketball championship was anything but pretty. The game was a defensive affair full of fouls, and Gonzaga actually went 8:27 without making a field goal at one point in the second half, yet managed to stay close to the Tar Heels. Down the stretch, though, both teams started making more impressive plays, and UNC came up with several key ones in the final seconds to cap off their self-described season of redemption, pulling off a 71-65 win.

That was an impressive turnaround, as the Tar Heels came up just short against Villanova on a buzzer-beater last year. This time, though, they delivered all the crucial final-seconds execution to win their sixth national title. Afterwards, North Carolina head coach Roy Williams told Jim Nantz how last year’s finish motivated this year’s team:

This turned on a few key plays in those final minutes. First, this rebound scramble where two Gonzaga players had a chance at it, but it was eventually ruled North Carolina ball:

That was controversial, though, as the North Carolina player touching it appeared to have part of his hand out of bounds, which would have made it Gonzaga ball instead of a jump ball (which went to UNC, who had the possession arrow):

That could have been reviewed, as it was inside the final two minutes, but it wasn’t. After that, North Carolina hit a key shot to go up three. Gonzaga star Nigel Williams-Goss then drove the lane, but was blocked by Kennedy Meeks, and Justin Jackson then recovered and went coast-to-coast for a clinching dunk that put UNC up five with just seconds to go.

That’s some great final-seconds execution from North Carolina. UNC came up just short in the final moments last year, but it was the reverse story for them this year. The composure in the dying seconds was crucial to their claiming this title, and really completing the season of redemption.