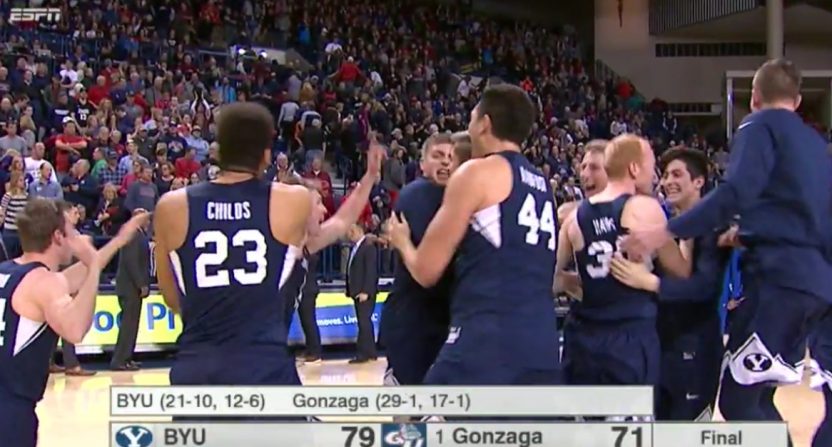 No NCAA men’s basketball team will go undefeated this season. The No. 1 Gonzaga Bulldogs were the last perfect team left, and they were 29-0 heading into Saturday’s West Coast Conference regular-season finale against the unranked BYU Cougars (20-10) at home. However, BYU had had great success in Spokane recently, winning their last two games there against Gonzaga. That trend continued Saturday, as they pulled off a remarkable upset to win 79-71.

Early on, everything looked very good for the Bulldogs. They were 20.5 point favorites, and that looked accurate early on, as they rushed out to a 18-2 lead. However, the Cougars refused to go away, and they fought back to cut the lead to 41-35 at the half. They then battled hard down the stretch, and took the lead for good with just over a minute to go:

After that, things really got out of control. BYU got a stop on their next possession, then missed a shot of their own, but scored on the rebound to extend the lead to 75-71. They then played great defense, creating a steal and forcing the Bulldogs to foul with 12.6 seconds left:

The Cougars would eventually win 79-71, and they went wild:

As ESPN’s stats department noted, BYU has been much more successful against Gonzaga than anyone else in the WCC has:

BYU knocks off No. 1 Gonzaga! Cougars have four wins over Zags in last four seasons (4-7), the same as the rest of the WCC combined (4-66)

This was still a highly unexpected result, but it came thanks largely to a great 29-point, 11-rebound performance from BYU’s Erik Mika. It was his fifth game of the year with at least 25 points and 10 rebounds, and it helped the Cougars pick up a great win. Gonzaga is still in excellent shape for the NCAA tournament, and will still get a high seed and possibly a #1, but thanks to Mika and his teammates, their dream of an overall undefeated season is at an end. The 1976 Indiana Hoosiers team can celebrate tonight, as they’ll be the only ones to ever go undefeated in the regular season and the NCAA tournament for at least one more year.