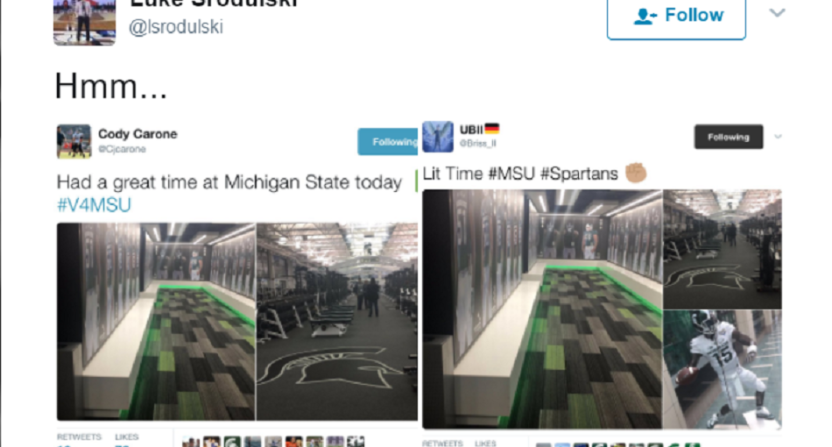 Everything was going great for JUCO prospect Unique Brissett when he woke up Monday morning. The Globe Institute of Technology wide receiver had trimmed his list to five Power 5 schools the night before, and the next step was a visit to Michigan State.

Only as Land of 10’s Luke Srodulski noticed, the images Brissett tweeted out from his visit to Michigan State on Monday looked identical to the pictures offensive tackle Cody Carone tweeted when he visited the Spartans in February.

It turns out that Brissett’s recruitment is a complete sham, and he deleted his Twitter and Instagram accounts immediately after that discovery became public.

Andrew Ivins, who covers Miami football for 247Sports, posted in a recruiting thread that coaches at Miami and Kentucky — who were in Brissett’s supposed final five — have “had absolutely zero contact” with the wide receiver. Ivins also said Brissett’s highlight video actually features an entirely different prospect that’s committed to a Power 5 school.

Anybody who has ever covered recruiting has a story (and probably many stories) of high school or junior college prospects exaggerating or flat-out lying about what schools are interested in them. Prospects can get away with it to some extent because NCAA regulations prevent coaches and programs from discussing recruiting until a prospect has officially signed.

But rarely do fabrications go this far.

Brissett’s story is reminiscent of when an offensive lineman named Kevin Hart (not the comedian, although he still made a lot of people laugh) held a news conference in 2008 to announce he was signing with California over Oregon. Local residents in Nevada went crazy because their town had never produced a Division I football player. The only problem was Cal and Oregon never recruited Hart. Their coaches said they’d never even heard of him.

Until the truth gets revealed in these situations, there’s typically little reason to think a recruit is lying.

That’s presumably why a news outlet like the Palm Beach Post ran with the story when Miami made Brissett’s top five finalists. Here’s part of their story on Brissett from Monday prior to the discovery of his made-up recruitment:

Brissett, listed at 5-foot-10 and 157 pounds by 247Sports, is a three-star recruit. His recruiting profile on NCSASports.orga [sic] says he is actually 6-2 and 215 pounds. In a personal statement on the site, Brissett said he began playing football at age 10, when his family moved to the U.S. from Germany.

According to his NCSASports profile (which “recruits” can make themselves — go ahead and try for yourself), he is four inches taller and 65 pounds heavier than his 247Sports profile indicates. There’s also very little information available about Globe Institute of Technology — no football roster, no stats. And that’s probably got to do with the fact that Globe closed in September.

After Hart’s recruiting sham in 2008, he wound up at a junior college before landing at a Division II school. At least with Hart, we know he was a real high school football player because he showed his face at a press conference. Right now, Brissett is just a complete mystery.