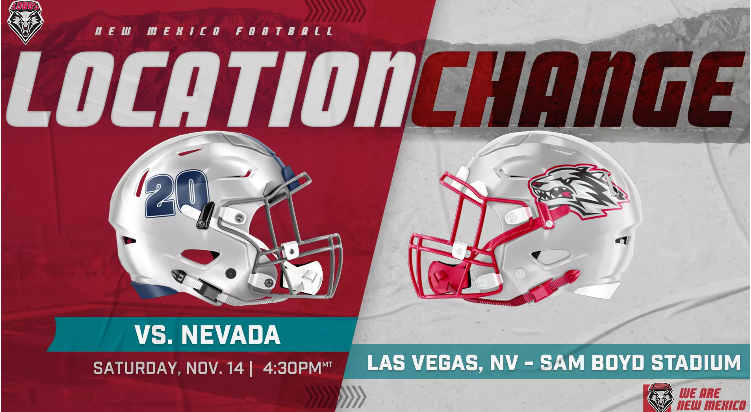 There have been a lot of COVID-19 cancellations and postponements in college football this year, including at least six this week. But a particularly unusual situation involves the Mountain West’s New Mexico Lobos, who have relocated their entire program to Las Vegas (specifically, to the UNLV campus) for the time being thanks to state pandemic regulations. And that’s now led to UNM’s Nov. 14 home game against Nevada being moved to Vegas as well, as Chris Vannini of The Athletic discussed Thursday:

News: New Mexico-Nevada game on Nov. 14 has been moved to Las Vegas (Sam Boyd Stadium) "due to the current state health protocols and guidelines in New Mexico, including the prohibiting of groups of larger than five people."

The neutral-site game will have UNM as the host institution.  Sam Boyd Stadium is where UNM has been practicing since Monday, November 2 in preparation for this week’s game at Hawai’i.  The game is being moved due to current state health orders in New Mexico.

The game will not have any fans in attendance.  The game will still kickoff at 4:30 p.m. Mountain Time and 3:30 p.m. in Las Vegas as originally scheduled, and it will be broadcast on FS2.

The Lobos were supposed to host San Jose State on Oct. 31, but played that game on the road instead (they lost 38-21). After that game, they headed back to their facility for COVID-19 testing and a tape breakdown, then headed off to Vegas Monday with clothes and toiletries for a couple of weeks. Here’s more from Will Webber of The Santa Fe New Mexican on what’s going on there:

There’s no telling when the team will return to Albuquerque. Forced out of town due to the statewide pandemic-induced public health guidelines that severely limited their functionality, the Lobos are relocating to Las Vegas, Nev., for at least the remainder of this week and likely until mid-November. They’ll live in student housing on the UNLV campus, practice at UNLV’s Sam Boyd Stadium and then fly to Honolulu on Friday for a game the following night against Hawaii.

Whether they return to Albuquerque after Saturday’s game depends on whether New Mexico’s health public health order eases enough to erase the 14-day quarantine and allows the team to practice and play without state interference.

“When are we bringing them back?” said UNM athletic director Eddie Nuñez, echoing a question to him. “It really all depends. We’re just going to get through this first game, play at Hawaii and then we’ll re-assess where we are at that time.”

Limited to groups of five in practice since mid-October, UNM brokered its deal with UNLV to essentially sidestep New Mexico’s lockdown.

It’s pretty unusual to have two schools from the same conference sharing the same stadium for practices and games, especially with one of those schools normally having their own facilities in another state. But it seems like it will work for the time being; New Mexico’s away this week, and UNLV is away next week (at San Jose State), so the stadium is free for UNM to “host” Nevada. It’s going to be interesting to see how long the Lobos have to stay in Vegas, though.