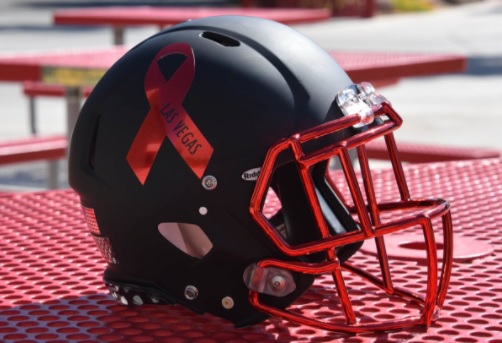 Sports are often used as an escape from difficult times in our real world lives. A college football game being played this Saturday may not be enough to erase the pain and sorrow experienced this week in Las Vegas, resulting from a deadly massacre shooting. But the UNLV football program will continue with their regularly scheduled football game against San Diego State while also paying tribute to those affected by and responding to the mass shooting at a country music concert.

The UNLV players will wear a specially-designed black helmet with a red chrome facemask and a shiny red ribbon with the words “Las Vegas” inscribed on it.

Here is the special helmet @unlvfootball will wear Saturday in tribute to the victims and in honor of the heroes from Sunday. #VegasStrong pic.twitter.com/ojJ49mhSFl

UNLV was quick to respond to the tragedy that claimed the lives of 59 people and injured hundreds more in the deadliest mass shooting in recent American history, dedicating Saturday’s game against San Diego State as a tribute to victims and local heroes. The tribute will include a pregame ceremony to honor the victims and first responders. A giant 100-yard American flag provided by the Las Vegas Bowl and San Diego’s Holiday Bowl will be displayed on the field as well. San Diego State’s football team will also wear a red ribbon decal on their helmets in a show of unity, and coaches will wear the ribbon as well.

“Our thoughts and prayers continue to be with the victims and the families impacted by this senseless act of violence,” UNLV athletic director Desiree Reed-Francois said. “While football is just a game, it can also serve as a rallying point of unity and allow all of us to recognize the incredible heroism displayed by so many this week. We are all extremely proud of our community’s response over the last couple of days.”

Head Coach Tony Sanchez with some strong words and an inspiring message about this great city of Las Vegas: pic.twitter.com/Vu7sw8Wt03

UNLV’s football helmets continue a growing trend in college football using uniforms as the medium to display a show of support and unity for those affected by similar tragedies.

Last month, the University of Houston wore “Houston” on its jersey nameplates for its home opener following the massive flooding and damage Hurricane Harvey inflicted on the region. In 2014, Florida State wore a special helmet decal to honor the lives lost in an on-campus shooting.

Another ACC school, Virginia Tech, has a history of similar decals in response to shooting incidents around the country. The Hokies, of course, are a part of the nation’s mass shooting uprise following a 2007 massacre which claimed 32 lives and injured 17 more on Virginia Tech’s campus in 2007. Since then, the Virginia Tech community has responded with displays of unity for other shooting incidents near and far.

In 2012, following the Sandy Hook school shooting in Newtown, Connecticut, Virginia Tech added a sticker with the number 58 on top of a ribbon displaying the school colors of Virginia Tech and Sandy Hook Elementary School, representing the total number of lives lost between the two shootings. In 2015, after a local TV news reporter and camera operator were shot on the job, Virginia Tech again reacted with a memorial sticker on the back of their helmets to honor the victims, one of which was a Virginia Tech graduate. James Madison, the alma mater of the other victim, had a similar tribute decal as well.

Adding a memorial decal won’t change the history of events or bring back any lives, but it is a simple and tasteful gesture to show support for the local communities affected by tragic events. This season, we have already seen tribute decals for a variety of events ranging from mass shootings to hurricanes. The effort that goes into arranging these tributes is well-reasoned and hopefully will be appreciated by those to whom the honor is intended. Seeing schools and teams use their resources in a respectful manner for their local communities, and communities from afar, is a reminder that sports can help us heal and come together, even if just by a small amount for a few brief hours.