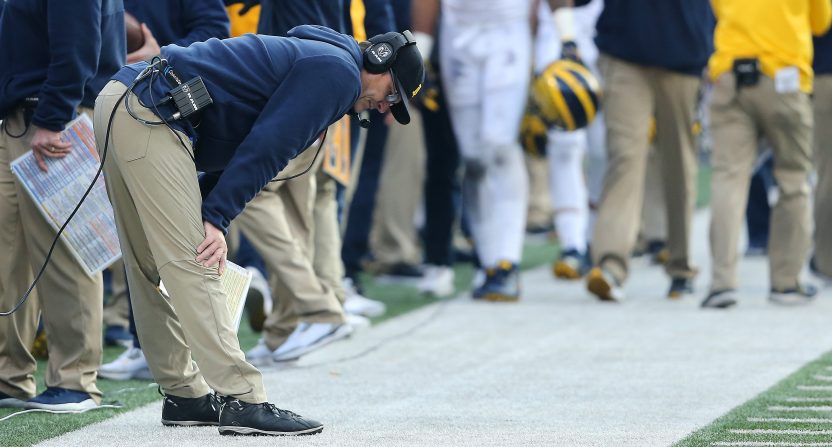 Michigan was embarrassed by rival Ohio State via historic beatdown sending Michigan’s Big Ten championship and playoff dreams up in a cloud of smoke lost in gray and dreary Columbus, Ohio.

Michigan’s 62-39 loss saw Michigan give up the most points either team has scored in the long-standing history of the rivalry. Harbaugh is now the first and only coach in Michigan history to start his tenure with the Wolverines with a record of 0-4 in his first four games against the Buckeyes. Michigan’s top-ranked defense was no match for the Buckeyes as Dwayne Haskins set a single-season Big Ten record for the most passing touchdowns (passing Drew Brees) and the Wolverines had absolutely no answers all game long.

Others in an Ohio State uniform got involved in a variety of ways too.

A freshman playing in his fifth game for Ohio State, Chris Olave, scored his first two career touchdowns in the first half and he later blocked a punt that was returned for a touchdown by the Buckeyes. Ohio State combined for 249 rushing yards as a team, with Mike Weber pounding the ball, Parris Campbell providing a dash of speed when needed, and J.K. Dobbins being a bit of a Swiss Army knife on the ground. For all the success Michigan had this season under Harbaugh, Urban Meyer and Ohio State continue to demonstrate that Michigan still has work to do in order to hit the next level.

In the history of the Ohio State-Michigan series, Michigan has allowed at least 42 points to be scored by Ohio State a total of eight times. Harbaugh has been the coach for the most recent two with 62 points scored on Saturday and 42 given up in 2015. The difference between Ohio State and Michigan is clear. Although both schools tend to recruit well, Meyer gains an edge by having a better range of athletes to rely on while Harbaugh continues to stick with a traditional Big Ten approach designed to ground and pound in a throwback style.

As this season has shown, that is a good enough philosophy to count on when you have a strong defense, but teams with more versatility across the roster will expose the inability to adjust to the game today. Ohio State has been working to build a team full of athletic versatility since the day Meyer arrive don the scene, and a couple of years to get a head start on that recruiting and player development philosophy continues to pay off as programs like Michigan and Penn State are making up for lost time and remain unable to keep up the pace with Ohio State.

Because of that, the criticisms of Harbaugh will only grow louder, and his players will hear about it as well.

“I don’t know why he would take any heat after this loss,” Michigan quarterback Shea Patterson said after the crushing loss to the Buckeyes. “He took heat last year and took a lot of heat this year, even when we were winning. We have a chance to have an 11-win season. I know that’s not our ultimate goal, I know that’s not reaching our top expectation, but we have a chance to win 11 games and I think that’s a successful season.”

It is easy to suggest Michigan’s season ended in failure. At Michigan, the bar is ultimately set on a couple of primary goals; beating Ohio State and winning the Big Ten. By those standards, Michigan’s season is a failure as the Wolverines accomplished neither of those goals, nor have they accomplished either in the entire Jim Harbaugh era in Ann Arbor.

But to suggest Michigan is failing under Harbaugh may be a tad misguided. In two of the past three seasons, Michigan has been in a position to play for a Big Ten title and a spot in the College Football Playoff right up until the last week of the season. Not too many programs in the country can say they have done the same aside from Alabama and Clemson. Considering where Michigan was when Harbaugh took over, being a legitimate playoff contender at Thanksgiving weekend two of the last three years should suggest the Wolverines are in the best shape overall they have been in a long time.

But clearly, being this good is not good enough for Michigan. Harbaugh is a really good coach, and he is surrounded by a solid coaching staff. There are many good things happening with the Michigan program, even if they have yet to get past Ohio State on a frustrating annual basis for the maize and blue. Criticisms of Harbaugh are fair given he has yet to coach Michigan to a division crown despite being in sole possession of first place heading into the final week of the season this year and being in the driver’s seat under similar circumstances just two years ago. But when lobbing criticisms toward Harbaugh, it should also be worth keeping everything in perspective.

Michigan is in a better position today than it was before Harbaugh was hired, but they remain in the rearview mirror of Ohio State and do not appear to be gaining much ground. Is this the ceiling for Michigan under Harbaugh? If so, how long will that be good enough for the big money donors who support the program?

Hot seat talk for Harbaugh is not necessary, but after four years on the job, it is time to start wondering what’s the next plan of attack for Harbaugh moving forward to get past Meyer and Ohio State. Are Harbaugh and Michigan OK with simply stringing together 10 and 11-win seasons on a somewhat regular basis, or is it time to figure out what can be done differently to cross the finish line in a race to a Big Ten title and College Football Playoff spot?