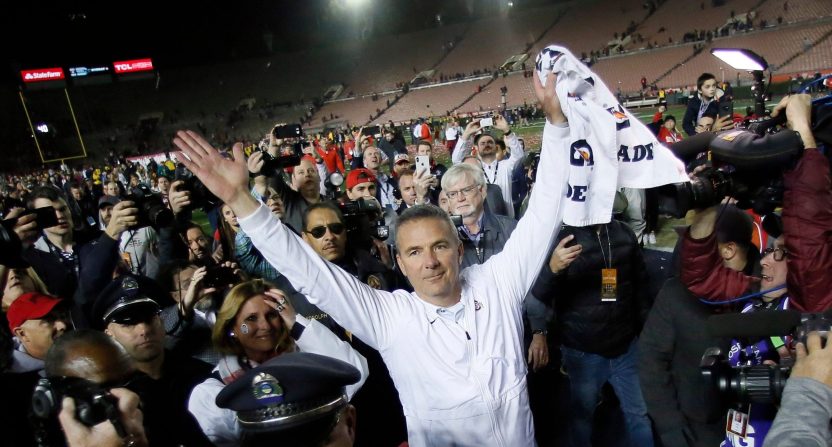 Urban Meyer’s time in the NFL was an epic disaster, but it doesn’t change the fact that he was a winner every place he went in college football. Between two strong seasons at Bowling Green, going 12-0 at Utah, piloting Florida to two national championships, and leading Ohio State to a national title and perennial success, it’s no wonder that in spite of all his issues he’s still considered a leading candidate for any major head coaching opening that pops up.

While Meyer appears to be returning to the cozy confines of the TV studio, rumors of his potential return to the college football sidelines will follow him for the foreseeable future. While most people think of powerhouse programs like Texas or Notre Dame, there’s an interesting theory about how Meyer might be more interested to return to his roots, if he ever did decide to coach again.

On Friday’s episode of Buckeye Talk, Doug Lesmerises spoke with college football reporter Kyle Rowland and sports columnist Dave Briggs of the Toledo Blade about a slew of topics. The final one was whether or not it was possible that Meyer might want to return to where his head-coaching success started in the MAC.

The conversation, which started as a tongue-in-cheek discussion about how Nick Saban could return to Toledo while Meyer returned to Bowling Green, eventually got into why Meyer returning to Bowling Green could actually, maybe, possibly have some legs.

“There is an actual, still fanciful, yet serious conversation here,” said Lesmerises. “After Jim Tressel was out at Ohio State, and everyone was trying to figure out what’s Jim Tressel gonna do next, there’s definitely was a line of thinking of, you know what, maybe he’ll just go to (D-III) Baldwin-Wallace (University), where his dad was a legend, where the football is pure, and enjoy himself, scheming up plays for Baldwin-Wallace games. And when people said that, it didn’t feel likely, but it didn’t feel impossible.

“If you try to picture…if he’s never gonna be back at the top again, what would he do? This is kind of like that.”

“I totally think it makes sense,” said Rowland. “I would be surprised if he would consider Toledo…he has so much love for Bowling Green. It really is crazy the reverence he has for that place. But I think Bowling Green is a real thing. Their coach has a big year this year. Scot Loeffler. Where, at the end of the year, perhaps, he’s unemployed. And their athletic director has a very important hire to make. Urban still has a lot of friends at Bowling Green who are big-time donors. I really think the stars could align and he could end up there.”

Briggs brought up that if the job openings that Meyer can ultimately get are on the level of a Texas Tech or Washington State, why not just go to Bowling Green instead?

“If he goes to Texas Tech or Washington State, it’s gonna be so hard to win at a high level,” said Briggs. “Obviously, Urban could be the guy who does it. But if you go to Bowling Green, you can just rule the MAC.”

It’s hard to imagine that Meyer’s ego would allow him to make a “backward” move like that, especially coming off such a disastrous time in Jacksonville and when some of the biggest college football programs in the nation remain possibilities. And even if he were to return to Bowling Green, how long would he stay there, especially if he finds success right away?

It feels like a wild theory but then again no one expected Urban Meyer to be in the situation he’s in right now. Who knows where he’ll be a year from now.