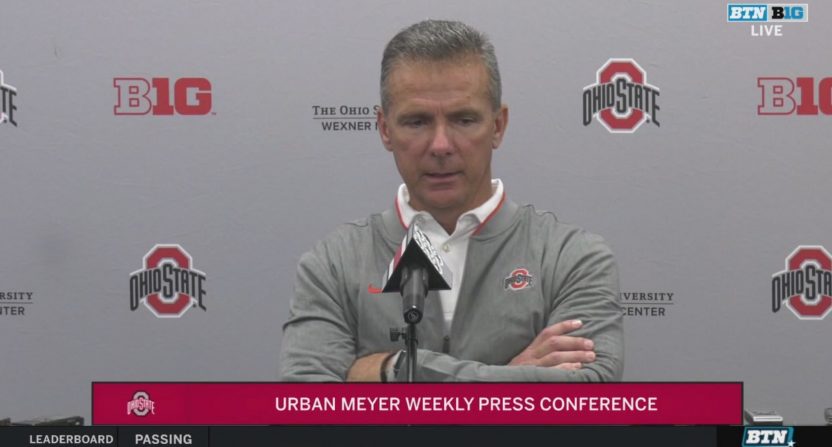 I spent a decade writing about Syracuse basketball coach Jim Boeheim and covering his many highs, many lows, many outbursts, and many sarcastic comments. I completely understand why so many people just think he’s a whiny, curmudgeonly asshole, mostly because the only times they’re hearing about him is when he’s being a whiny, curmudgeonly asshole with suspect opinions about his players, old man thoughts about the state of the game, or dickish responses to reporters.

But the more I followed his career, and the way he reacted to major touchstones across it, I came to realize that what seems like a one-dimensional character is actually a nuanced portrait of a man who struggles with his identity as a “god.” I don’t mean that literally. While Syracuse fans adore Boeheim, they don’t pray to alters bearing his image (save for maybe a handful). But Jim Boeheim, a quiet guy from Upstate New York, built a basketball empire up there without even trying and has spent much of his adult life managing the expectations and responsibilities that come with that.

For most of the time, he succeeded and was basically left alone to rule his fiefdom as he saw fit. Sometimes, however, he failed at his duty and he would meet the attention and fallout from those times with an outward aggression that attempted to mask a deep fear that his entire life’s work would be ruined. Worse than that, it was all a lie. That was basically the case with the Bernie Fine scandal. In retrospect, it’s a testament to Boeheim’s status in Central New York that he not only survived that but has since thrived. Especially considering how poorly he handled the whole thing.

His initial response was to shame the alleged victims. Then he battled with national reporters who were intruding on his sacred space. He pushed back against everything that was coming for him because, if you looked closely, he was terrified. Those smiles during press conferences didn’t prove he was remorseless; they proved he was realizing just how much shit he was swimming in and using the only defense mechanism he knew in order to climb out of it.

I’m reminded of all that as I watch Ohio State head football coach Urban Meyer flop and flail his way from one apology to another in the wake of the Zach Smith scandal. Like Boeheim, there were multiple points throughout the timeline when Meyer could have stepped in and made a different decision. But he keeps making bad decisions. Each robotic apology fails in its purpose, requiring another apology that clarifies one issue but creates another.

Here were are on the precipice of Meyer’s return after a three-game suspension, and he doesn’t appear to have actually learned anything or have any further understanding about what Courtney Smith has gone through. By all accounts, based on the way he talks about it, he still doesn’t believe her and sees himself as a victim in this whole ordeal.

Urban Meyer: "I've been accused of helping players too much, and giving them too many opportunities. That's an accusation I accept."

My initial reaction to Meyer’s latest press conference on Monday was, like a lot of people, disgust. I started to analyze why and I started thinking about who Urban Meyer is and, more importantly, who he’s been for the better part of the last 20 years. And the more I thought about it, the more I realized that Meyer is a god struggling, and failing, with the notion that he’s wrong. Furthermore, he’s struggling with the notion that he alone cannot fix this.

That doesn’t make him sympathetic, but it does make him very human, and maybe that’s exactly what he needs to understand at this moment.

Because, honestly, when was the last time someone inside Meyer’s program or school told him no or didn’t look to him to lead the way? That certainly has never happened at Ohio State where he returned the program to elite status, winning a national title and going 73-8 in six seasons.

He almost certainly never heard “no” at Florida where he won two national titles in six years and left for health reasons right before things might have gotten dicey.

Remember when Urban Meyer faked dying to get out of Florida?

He probably never needed to answer to anyone at Utah either. In two seasons there, he went 22-2 and took the program to the Fiesta Bowl. No one was going to question anything this guy did.

You probably have to go back to Bowling Green for the last time that someone maybe, possibly treated Urban Meyer like a human being with accountability. That’s 2002. Fifteen years ago. Since then, he’s been a football god standing high above his peers (save for Nick Saban). Along with his cult of personality, his cult of winning has made him almost unimpeachable. Every program he’s gone to has gotten better, gotten better quickly, and gotten to the heights of the sport. This is a guy who gets things done, knows all the answers and tells you how everything works.

And you better believe that Urban Meyer has bought into his own hype in a big way. It’s why he thinks he can define domestic violence. It’s why he can basically make it clear that he doesn’t believe Courtney Smith even in the face of everything that’s gone down. It’s why he can try to push through the controversy and get back to focusing on football. It’s why, in a week or two, he’s going to blow up at a reporter for asking about Courtney Smith when they should be past that already and because football is more important anyway.

A reporter asked about the credibility of Zach and Courtney Smith.

His follow up was "How much better can this offense get?"

I about spit out my coffee.

And he may end up getting what he wants. In his absence, Ohio State went 3-0 and has a clear path to the Big Ten title as the rest of the conference implodes around them. If Meyer can guide the Buckeyes back to the College Football Playoff, most Ohio State fans will be happy to move on from the “distraction.” If he can muster up another national title before he resigns for health reasons once again, he’ll get a statue on campus soon enough. Hell, he might end up getting statues at multiple schools when it’s all said and done. And his time as a mere mortal grappling with the frailty of the human condition will have been a blip on the god-king’s road to eternal glory.

Urban really doesn’t want to do this pic.twitter.com/Zrth2UEBPI

Hell, it happened for Jim Boeheim. Just a year removed from the scandal, Syracuse returned to the Final Four. Following a round of NCAA violations that he also somehow survived, Boeheim and the Orange returned to the Final Four in 2016. Not only has all been forgiven, but after being forced to announce his retirement date, Boeheim was basically given a lifetime contract to coach as long as he wanted.

1 thought on “Urban Meyer is grappling with the realization that he’s not, in fact, a god”