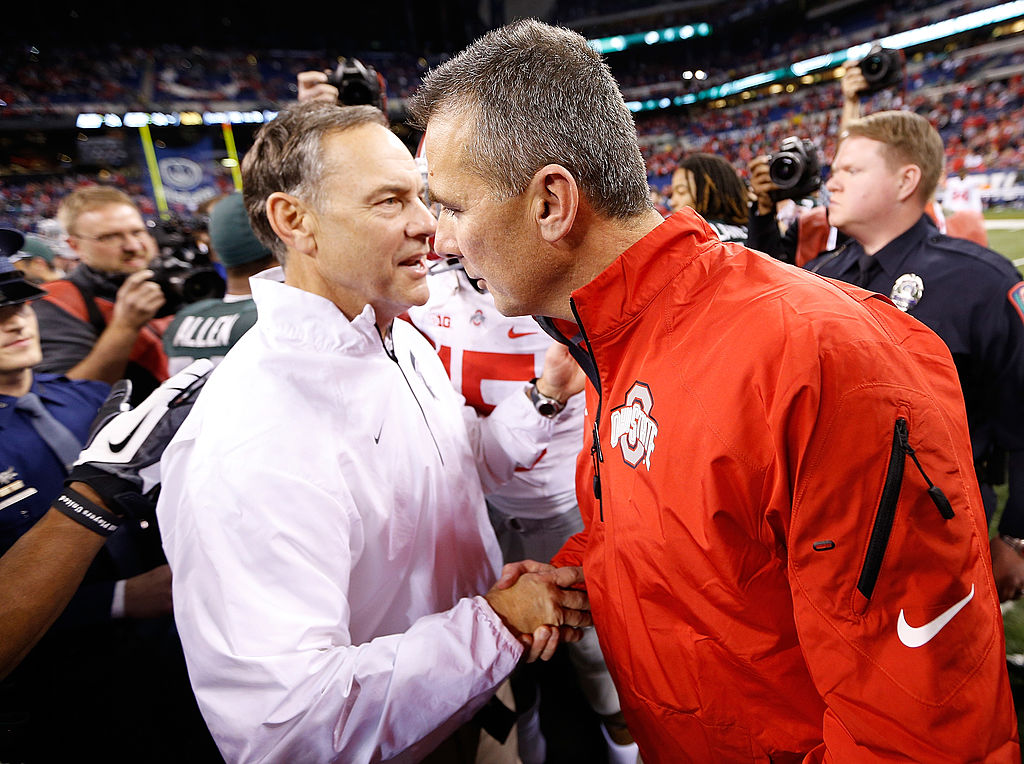 The accusations were spurred on by Penn State coach James Franklin, who suggested that his Big Ten colleagues are negatively portraying his program by using its past transgressions to sway recruits. Meyer vehemently denied the accusations made against them, claiming to have not made negative accusations against Penn State.

“Absolutely not,” Meyer said. “And that’s the first time I’ve heard that. I’ll address that with Coach Franklin if that is an issue. That’s a pretty strong allegation that I’ve not heard yet. So that’s not been presented to me until this moment. Absolutely not.

“We’ve got a great deal of respect for every school in our conference, and we do just fine with recruiting. We don’t worry about that stuff. I’m glad you told me that. If that’s true, I’ll address that.”

Like his rival, Dantonio denied playing any part in using negative tactics to sway recruits from Penn State, stating that he and his program are held to a higher standard.

“I know we have a lot of reporters here,” Dantonio said. “Everybody’s got a pen. But from my standpoint, I have not said anything negative about Penn State, and hopefully our coaches have not as well. So I was surprised to read that.

“I don’t know what happens out there on the road completely. But it’s not our M.O., and that’s not how we do business.”

On the other side, Franklin declined to comment on the specific schools he feels are responsible for attacking Penn State, but it’s clear he feels that Meyer and Dantonio, among others, are certainly pitching recruits plenty of negative things about his program.

“The people we’re competing with — Ohio State, Michigan, Michigan State, Notre Dame — this is just not something they have to deal with,” Franklin told the Reading Eagle in June. “Although we want to move on, those other schools are not letting us move on. …

“We’re able to tell kids they’re going to compete against the very highest level week in and week out. What makes it tricky, they’re not having to deal with some of the things we’re dealing with and working through, which magnifies it. Those programs as well as others know that and use that against us. We have that conversation with every single prospect. We don’t usually initiate it, but it’s coming from somewhere.”

It’s clear that whatever questions recruits are asking Franklin and his coaching staff, it appears to be enough to have the head coach concerned about what other schools, in the Big Ten or outside of the conference, are telling them about the program. Regardless of whether they have or not, there is no doubt that Penn State is still very much a program trying to recover from the Jerry Sandusky scandal that rocked the school to its core just several years prior.

Combine that uncertainty with their inconsistent play on the field,  it is certainly much harder for Penn State to recruit over top tier schools like Ohio State, Michigan State, and Michigan than it used to be. Franklin’s job presents a much different set of challenges to overcome, but openly accusing other Big Ten schools of negatively swaying recruits from Penn State is a bold yet risky move, especially on media days.