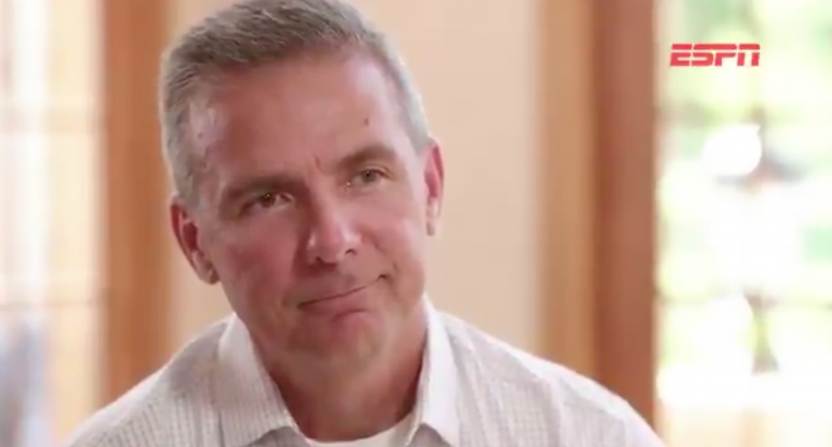 Sometimes, it’s difficult to tell what’s real news and what’s Onion-esque satire. “Urban Meyer to teach character & leadership course at Ohio State” certainly seems like a candidate for satire, but no, it’s all too real. Ohio State head coach Meyer had previously announced he’d retire after the Rose Bowl over health concerns (with the ongoing discussion around his suspension, “memory loss” and deleted texts in reporting of domestic violence allegations against former assistant coach Zach Smith perhaps playing a role), with Ryan Day taking over as head coach. But in an interview with Columbus CBS affiliate WBNS-10 Dom Tiberi, Meyer said he not only plans to stay involved with the football program and work with athletic director Gene Smith in some capacity, he also plans to co-teach a course on “character and leadership” (starting around 2:50):

“What are you teaching at the Fisher School of Business?”

“Character and leadership. Lieutenant-Colonel Charles Buchanan and I are going to work together and co-teach a class. I’ve met with him a dozen times and he’s awesome. And the Fisher School of Business, we have a great relationship with them and the dean, and I look forward to it.”

Look, yes, on some level, Meyer may have some things to add there. He’s gone 82-9 overall as a college head coach at Bowling Green, Utah, Florida and Ohio State, and he’s won three national titles (2006 and 2008 with Florida, 2014 with the Buckeyes). He’s proven able to survive and thrive in several different college coaching environments. And maybe sticking around the school to teach a class and do whatever else in the athletic department and with the football program will add to the case that he’s actually “an Ohio State guy.” And there are certainly plenty of business CEOs who prize success even amidst intense criticism, and Meyer’s been able to achieve that.

But on the other hand, it’s quite something to have someone co-teaching a “character and leadership” class who was suspended from his role as head coach for three games this year after a university investigation concluded he “falsely stated he lacked knowledge of all relevant events regarding alleged domestic violence in 2015,” and that he didn’t properly report domestic violence allegations to Gene Smith. Those events certainly carry questions about Meyer’s character and leadership, and there are further questions about that that date back to allegations against Zach Smith when Meyer worked with him at Florida. (To say nothing of all the questions around Meyer’s handling of Aaron Hernandez and other Gators’ players who got into trouble.) Meyer has proven able to lead teams to on-field success, but there are a whole lot of questions about just what “character and leadership” means for him, and what sort of values he’ll be passing on to students. But in 2018, perhaps the win-at-all-costs approach that Meyer has been accused of is perfectly fitting.

1 thought on “Yes, Ohio State will really have Urban Meyer teaching a “character and leadership” course”