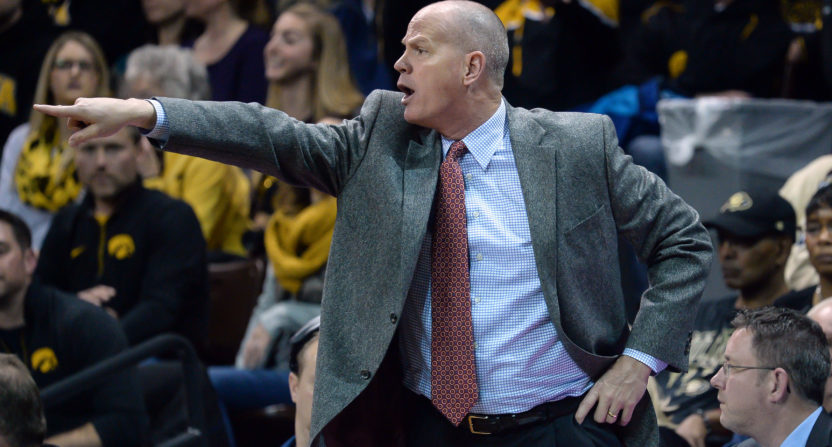 Later tonight, in a Pac-12 men’s basketball clash between USC and Colorado, the Buffs will look to continue their recent run by picking up a win against the Trojans after winning against Arizona and Arizona State. And if this game against USC is like Colorado’s latest battle with Arizona, then Colorado head coach Tad Boyle will take great pride in a win against the Trojans.

Following Colorado’s win against Arizona, Boyle told reporters he took extra delight in the victory because Arizona was one of two Pac-12 schools connected to the federal investigation that rocked the college basketball world before the start of the season.

Yeah, the other team connected to that scandal was, as alluded to by Boyle in his postgame comments the other day, is USC. Enter USC head coach Andy Enfield, who took note of the comments by his colleague in Colorado. Enfield knew he would be pressed for a response by reporters this week, and he came prepared with a written response to recite to reporters following a practice this week.

“We are disappointed in Tad Boyle’s comments, and what they imply,” Enfield said, according to The Orange County Register. “Not only is it unfair for someone to comment who doesn’t have all the facts, but those comments are unfair to those of us involved in the USC men’s basketball program, most importantly to our student-athletes and their families. They’re outstanding young men who chose USC to earn a world-class education and to compete for championships.”

Enfield accusing Boyle of not having all the facts is about as close as you can get to fighting words between coaches, but Enfield does have a legitimate case to make in defense of his team. While some people associated with the federal scandal do deserve to be called out, at this point, there is no indication the entire program is to blame, especially the players on the roster that will be playing tonight. One of those players available tonight is USC guard Elijah Stewart, who says Boyle made this personal.

“It’s cool,” Stewart said. “I know growing up, grown-ups would tell me, ‘Don’t speak on things you don’t know about.’ And I feel like he didn’t have parents to teach him that.”

USC assistant coach Tony Bland remains on administrative leave after being accused by federal prosecutors of accepting a bribe from a sports agent. Guard De’Anthony Melton remains sidelined for all 17 games so far this season while the impact of the investigation continues to unravel.

We’ll see just what happens between the postgame handshake between Enfield and Boyle, but we can probably expect nothing more than a brief handshake as the coaches move down the line as quickly as possible, leaving most of the drama for the postgame press conferences.