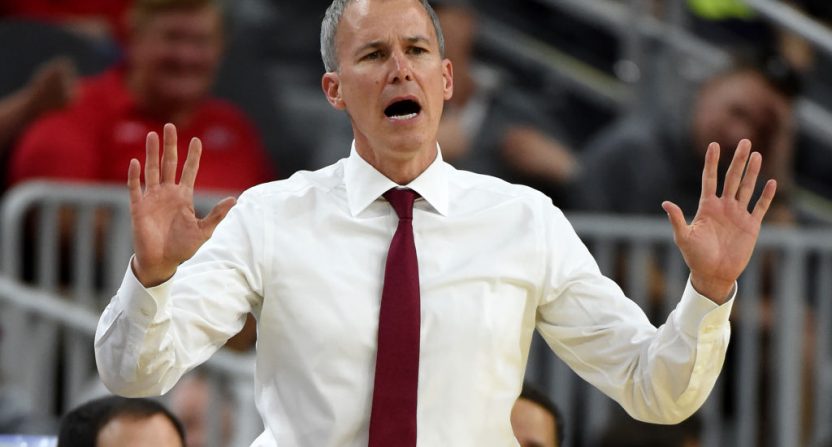 Another week, another story of someone claiming sports media has an east coast bias. Typically, this form of criticism is aimed directly at ESPN, but on Thursday, this statement was aimed at sports media as a whole.

USC men’s basketball head coach Andy Enfield gained notoriety for turning Florida Gulf Coast University from a small no-name basketball school into “Dunk City.” Part of what made FGCU so great was not only its surprising tournament run, but also the media’s infatuation with the program.

Enfield is now the head coach at a more established program in USC, who beat Washington on Wednesday in the Pac-12 Tournament. Moments after the win, Enfield made headlines with a single quote not about the tournament, but about the media.

“I think there’s an East Coast bias in the media,” Enfield began.

The statement came after a reporter mentioned that USC’s game against Washington tipped off at 8:30 pm PST/11:30 pm EST. But the question didn’t end there, as it also referenced how late start times could make it harder for Pac-12 teams to make the tournament if people aren’t awake to watch them.

That’s when Enfield went off and mentioned his knowledge of a bias while at FGCU.

“I knew it then,” Enfield said, “but when you’re out on the West Coast, it’s very obvious. Our games start later. A lot of the media and the people that are bracketologists, they don’t even watch our games. They get the internet. They’re in bed by 10 p.m. East Coast time and our game’s just starting or maybe it hasn’t started yet.”

This out-of-nowhere answer from Enfield occurred at 2:00 am EST, or 11:00 pm PST, after the win over the Huskies.

This year, 21 of USC’s 33 games tipped off at 10:00 pm EST or later, obviously making it harder for east coast sports fans and the media to watch them.

“Andy must have a lot more time to think about things than I do,” Oregon coach Dana Altman said. “We can’t change the time zone we’re in.”

“To say late start times might be hurting Pac-12 basketball,” Scott said, “does not resonate from my perspective.”

The thing is, Enfield can make these statements, but has to back them up a bit more.. East coast bias may typically imply the media prefers to talk about or watch east coast teams, and that may be the case. But as Altman points out, the Pac-12 can’t change the time zone they are in.

While Enfield could look at it as east coast bias, others in the media could simply think the Pac-12 isn’t as good a conference as say, the ACC, despite the strength of its three best teams.

So when Enfield complains about east coast bias, maybe he should think about the difference in star power and competition. The ACC routinely beats itself up with plenty of matchups against high caliber opponents, both in and out of conference. The Pac-12, on the other hand, isn’t the same, as teams like Oregon State and Washington (a combined 3-33 in conference) are near guaranteed wins for the rest of the conference. Nobody in the ACC is a guaranteed win.

At least this year, the year Enfield is complaining, the media probably isn’t showing much of an east coast bias. Instead, it’s just talking about the teams and conferences that are good from top to bottom and viewers want to know about.

Oh and by the way, in Joe Lunardi’s most recent Bracketology released Friday, the ACC has an incredible 10 teams in the tournament, while the Pac-12 has only four – including Enfield’s Trojans.