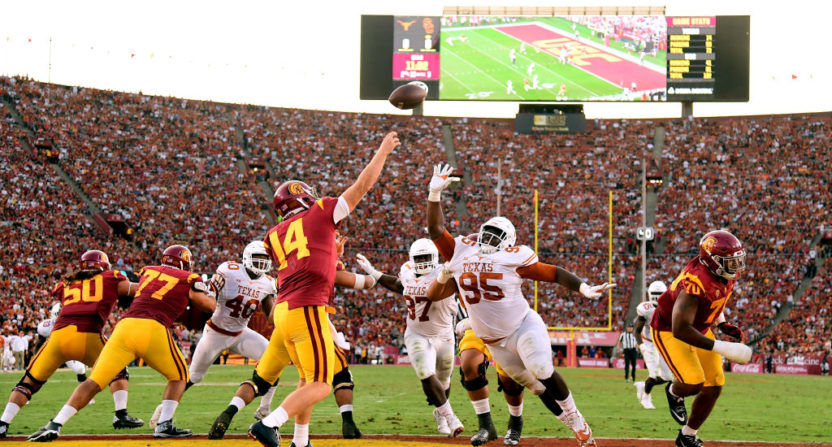 It may not have been pretty for the first 60 minutes of play, but a double-overtime win by No. 4 USC will leave a memorable image of a walk-on kicker, Chase McGrath, nailing a 43-yard field goal to lock down a double overtime victory over Texas. The box score will show Sam Arnold passed for 397 yards and three touchdowns. It will show the Trojans defense manage to hold Texas to just four third down conversions out of 16 attempts. All of these are good notes to take away from a wild night in the Los Angeles Coliseum on Saturday night as the Trojans improved to 3-0 on the year.

Yet, USC’s season has been a bit of a roller coaster ride through three weeks and that leaves some uncertainty for where exactly this season is about to head.

Credit USC for making the plays they have needed to make in the first three weeks of the season, especially last week against Stanford in a revenge game at home. But you will be forgiven if you have watched USC the past three weeks and wonder why they continue to be ranked as highly as they have. The Trojans were sleepwalking through the opener against Western Michigan until the talent prevailed with big plays in the fourth quarter. The same story was largely true again Saturday night as the Texas defense played one of the best games they have in a while, for 58 minutes.

As good teams will often do when locked in a struggle with their outmatched opponent, USC found big plays seemingly out of nowhere to help get by the upset-minded Longhorns. After Texas had scored an improbable defensive touchdown on a pick-six by DeShon Elliott, the Trojans had a 37-yard kick return by Velus Jones followed up by a quick six-yard run and then a 56-yard touchdown pass from Darnold to Jones. All things considered, this is the play Texas would most like to have back on the night.

It goes down in the books as a 56-yard touchdown pass, but that can be a tad misleading considering the phenomenal block that opened up the last bit of room needed for Jones to get the score before halftime. That’s one Texas would regret. But perhaps not as much as the last minute of the second half. After Sam Ehlinger led a monumental 14-play drive 91 yards for a go-ahead touchdown, Texas kicked the ball back to USC with just 45 seconds to play. Jones once again had a return just over 30 yards to give the Trojans good starting field position, but no timeouts. Two straight Darnold completions quickly put USC at the Texas 31-yard line, and another Darnold pass put the Trojans at the 13-yard line, where McGrath would set up for a game-tying field goal from 31 yards to send the game into overtime.

As far as Darnold is concerned, it was an up and down game. The same goes for USC. For the second time in three weeks, USC ended up on the right side of the rollercoaster ride, but if they don’t iron out some of the wrinkles in between the first and fourth quarters, they could go off the track that leads to a Pac-12 championship.