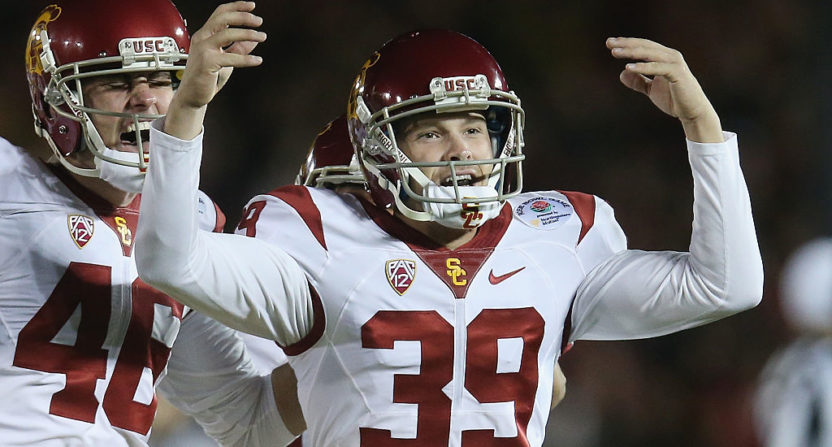 Last winter, USC kicker Matt Boermeester, who made a game-winning field goal as time expired in the Rose Bowl, was suspended from the team and ultimately dropped from the roster completely. His removal was the result of a university Title IX investigation that began when a neighbor saw Boermeester allegedly shove his girlfriend, tennis player Zoe Katz, outside her home. Just as with O.J. Simpson, USC does not want him returning to campus.

Now, Katz has revealed she believes USC’s treatment of Boermeester was “horrible and unjust” and that they “falsely accused” him, according to the Los Angeles Times. In a two-page statement provided by her attorney, Katz denied that Boermeester ever assaulted and claimed Title IX officials pressured her into feeling like a victim:

Katz said she was summoned to a mandatory meeting with Title IX officials, where she told investigators that the two were playing around. Katz was subsequently told that she “must be afraid of Matt,” she said. She told officials she was not. Boermeester has not been arrested or charged with a crime.

“When I told the truth about Matt, in repeated interrogations, I was stereotyped and was told I must be a ‘battered’ woman, and that made me feel demeaned and absurdly profiled,” Katz said. “I understand that domestic violence is a terrible problem, but in no way does that apply to Matt and me.”

USC also barred Katz from talking to Boermeester during the investigation, even though the two have been dating for over a year.

Katz continued to call the Title IX’s investigative process a rigged system and said she hopes her story can bring some change to the system. Here’s another except from her statement, via TMZ:

“Terrible and untrue things have been said about Matt by people who don’t even know him, including apparently the third party who contacted Title IX, and these bizarre assertions have been treated as fact in this investigation.”

“Words, including mine, have been incompetently or intentionally misrepresented, misquoted and taken out of context, which should not be that surprising since no statements were recorded or verified.”