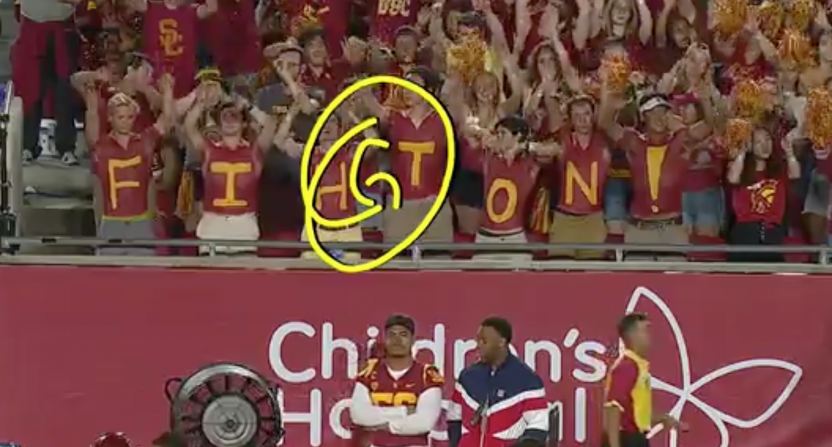 The art of a bunch of college bros deciding to attend the college football game with front row seats and spelling something out on their bare chests is a time-honored tradition. After all, you gotta support the team, right? But every now and then someone in the group has to leave their seat, thus messing up the coordinated chest painting strategy, and a TV camera will be sure to lock in when it happens.

On Saturday night, a group of USC students spelled out the school’s “Fight On!” cheer in school colors and did indeed get on TV. And as is tradition, ESPN showed the college bros only after one member of the group went missing. In this case, it was the dude sporting the “G” in “Fight.”

Lori Laughlin spent $50K to avoid ASU and get her daughter a private school education from here???? pic.twitter.com/qhf8G4OTb5

But this is just the beginning of our story. Our old friend Rod Gilmore got on the telestrator to mock the missing “G,” and things only went down from there. Gilmore mistakingly placed the “G” in the wrong place and managed to become the bigger joke.

I choose to believe Rod Gilmore, who holds degrees from both Stanford and Cal, is wise enough to know how to correctly spell “Fight” and this was just a simple technical mishap with the telestrator pen. Or perhaps the embodiment of “Pac-12 After Dark” come to life. But I also choose to believe that when a bunch of fans enter a stadium with a slogan painted on their chests, the director behind the scenes assigns one camera to lock on them for just this very reason.