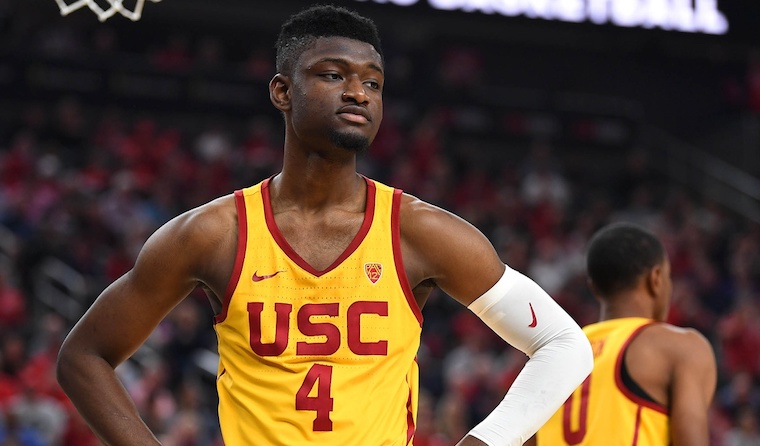 College football players sitting out of meaningless bowl games was the trend in 2017. Now all the rage could be college basketball players choosing not to play non-NCAA Tournament games as they look forward to their NBA future.

After USC was left out of the NCAA Tournament on Sunday despite playing for the Pac-12 championship, Trojans forward Chimezie Metu made the decision to not suit up for the NIT.

“He’ll prepare for the NBA draft,” USC head coach Andy Enfield said Tuesday night’s NIT opener double-overtime victory against UNC Asheville. “He will get drafted. He should be a pretty high pick. That was a personal decision on Chimezie’s part.”

Statement from USC head coach Andy Enfield: “Chimezie Metu has made a personal decision not to participate in the NIT as a precautionary measure to eliminate the risk of injury leading up to the NBA Draft.” pic.twitter.com/qgczqH6p56

College football has been battling this same situation for the past few years. Star players destined to be first-round draft picks like Leonard Fournette and Christian McCaffery made their respective business decisions to not put their health at risk in a mid-tier bowl game.

The debate over whether or not players should play in bowl games has become a hot-button issue even in light of athletes getting injured in games with no impact on the national championship picture. (Notre Dame’s Jaylon Smith is a prime example.) Not playing bowl games has not shown any negative impact on where those prospects have been drafted, and the trend will likely continue moving forward.

But now the issue is coming to college basketball, as Metu’s decision suggests. Putting his own draft stock ahead of the team in the postseason has drawn some criticism, which was to be expected. Metu defended his decision on Twitter with a series of tweets that appear to have been deleted. The tweets took some shots at USC fans who were coming after him for his decision.

Quite a thread capper from the USC star who opted to sit out the NIT, a decision that seemed to irk some Trojan fans. pic.twitter.com/LWnf4x0sj3

“To all the angry USC ‘fans’ out there: I know you’re mad I didn’t play tonight but I’m asking you to please keep the insults to a minimum and not judge me off a cautious decision that I made about my future but rather by the 3 years of hard work and dedication that I gave to USC,” Metu said in one tweet.

He followed that up by saying he was not apologizing for his decision even if it did leave USC thin on the court and meant the Trojans, the No. 1 seed in the NIT, had to claw their way to a double-overtime, 103-98 victory over UNC Asheville Tuesday night.

Players with promising professional futures sitting out of games that mean nothing in the postseason will continue to be the new norm. Don’t expect any player with a possible NBA future to sit out the NCAA Tournament anytime soon, but the NIT and other not-invited tournaments are a different story.

Sure, winning an NIT title is nice, but it’s not the same as the NCAA Tournament. The NIT is college basketball’s Holiday Bowl: a decent postseason destination but not at all on the same level as the big dance.

College athletes are still not paid for their performances beyond the typical amenities provided by a scholarship, and college basketball faces the unique problem of dealing with one-and-done players who use college as a pit stop on their way to the NBA. Metu isn’t in that category, but his decision to avoid any more risk in order to better prepare himself for the next step in his basketball career is sensible in this environment.

Metu will not be the first potential NBA draft pick to pass on the NIT. Eventually, a future lottery pick will do the same when his team misses out on the NCAA Tournament. Now that this door is open in college basketball, it’s never going to shut.