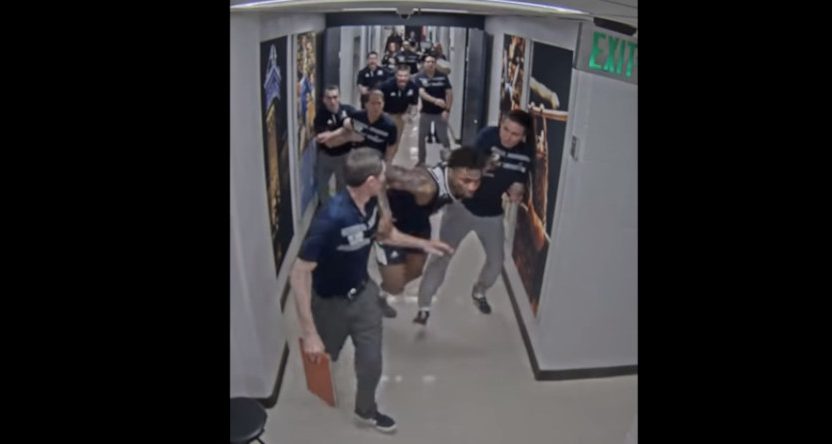 There’s a little more clarity coming out about just what happened with the crazy Nevada-Utah State postgame Saturday night, which saw Utah State fans rush the court after their 81-76 home win over the No. 12 Wolf Pack, angry confrontations in the hallway, coaches swearing at police officers, and Nevada’s Jordan Caroline punching the glass cover over a fire extinguisher.

For one thing, the Mountain West Conference (home to both teams) put out a statement saying that this wasn’t about the fans rushing the court, but rather about ” inappropriate conduct by individuals from both programs in the postgame handshake line and subsequently in the locker room areas”:

After a thorough investigation into the circumstances of Saturday night’s incident, which included a review of numerous video clips from various sources and the collection of written statements from multiple individuals, the Mountain West has concluded the situation was not caused by the court rush. There was a postgame management plan in place and it was executed successfully.

Rather, inappropriate conduct by individuals from both programs in the postgame handshake line and subsequently in the locker room areas created the unfortunate circumstances.

The Conference office has had multiple communications with both athletics directors and has shared the findings of its review.  Each institution will be responsible for the determination and administration of what it deems appropriate disciplinary action for those involved.  It must be made clear unsportsmanlike and unprofessional conduct is not acceptable and will not be tolerated.

What’s also interesting that Utah State has now released surveillance videos of the hallway in question, following records requests from USUFans.com and KSL (the Salt Lake City NBC affiliate). The two full hallway videos as well as press box and court view looks of the end of the game are available on this USUFans YouTube playlist. Here’s one of the court views:

And here’s one of the hallway views, which shows Caroline (#24) entering the frame about 3:24 with his jersey over his head. He walks to the locker room, then as other players come out, he charges back down the hallway through a crowd:

It’s still unclear exactly what precipitated all this, especially as those security videos don’t have audio, but it appears to have all started with the handshake line postgame. KSL’s Ryan Miller, Sean Walker and Carter Williams reported that “A USU staff member told KSL.com that a person off-camera had made a remark in the hallways about Nevada players and staff not shaking hands in the line and that it echoed in the hallways just before Caroline is seen exiting the locker room.” And as per what was said in that handshake line, Stadium’s Jeff Goodman had more on that:

Our insider @GoodmanHoops with the latest on @NevadaHoops in the aftermath of an ugly scene following their loss to Utah State. #BattleBorn pic.twitter.com/5lhyzQXJVH

“My sources tell me that this started in the handshake line. One of the Utah State assistants did not want to shake the hands of one of Nevada’s assistants. It escalated from there. When Jordan Caroline and some of the Nevada coaches went out through the tunnel to the same area where Utah State was, that same Utah State assistant yelled something, not racial, just something with an expletive about not shaking their hands. Well, Jordan Caroline was already heated; he had a bad game, they lost this game, obviously, the crowd erupted onto the court. And he reacted in a way…again, I was told nothing racial was said, but he reacted obviously in a flammable way and just went off.”

There are still some unanswered questions about this, but the surveillance video does help clear up a lot, especially when viewed in combination with the other media footage out there. And it’s useful for that video to be available to the public, especially as these hallway videos’ longer run time and fixed mounts present a more thorough picture of the whole situation compared to the shorter clips from individual media members that were out there. Credit to USUFans and KSL for filing those requests and to Utah State for answering them promptly. It’s yet more proof of the value of open records requests to college sports coverage.

We’ll see what comes of this next, with the conference choosing to let both schools handle discipline internally, but we now have a better idea of what happened. And it will be interesting to see how Stadium’s weekly “Running With The Pack” Nevada documentary covers this game and this postgame incident. It’s certainly not every week that you wind up with a hallway confrontation like this.