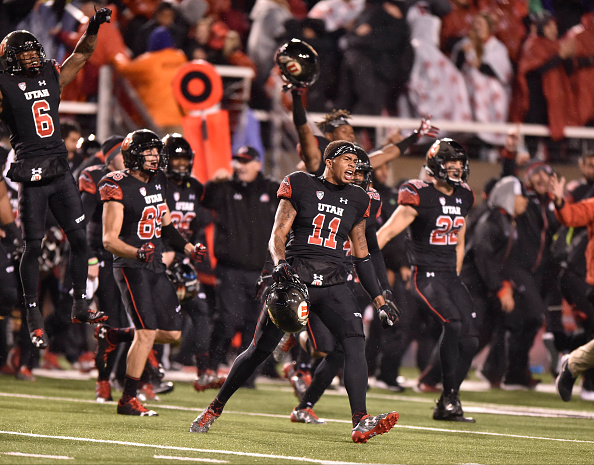 The Utah Utes rallied back from a two-touchdown deficit in the third quarter to defeat USC 31-27. This victory proves that the team has what it takes to win the Pac-12 South title.

Make no mistake about it: this is an impressive win for the Utes. Yes, it looks like the Trojans are in big trouble, but the team certainly played like a top 25 squad on Friday evening. With Sam Darnold under center, SC was much more dangerous offensively, racking up a season-high 466 yards. That’s an outstanding effort against a Utah D that entered Friday night’s contest ranked 15th nationally in total defense.

As well as the Trojans played, you’ve got to tip your cap to the Utah offense for winning this contest, because it kept coming up with the plays it needed to in order to win this ball game. When USC jumped ahead by 14 in the third quarter, the Utes answered with a 10-play, 85-yard drive. After holding USC to a long field goal on the ensuing possession, the Utah offense responded by marching 75 yards in 11 plays to cut the deficit to three. Thanks to a couple of crucial penalties, the Ute defense forced a punt, and gave the offense the opportunity to win the game.

That’s exactly what they did. Sure, it wasn’t always pretty, but Utah’s offense delivered when it mattered the most. The Utes went 2-for-2 on fourth down conversions on the final drive, highlighted by a gutsy call from Kyle Whittingham to go for it on fourth-and-one from the Trojan 23 when an Andy Phillips field goal would have tied the game up with less than 45 seconds remaining. This clutch conversion allowed Troy Williams to throw the game-winning score on the following play.

This type of explosiveness on offense is something that Utah simply didn’t have last year. Yes, the Utes put up their share of points last season, including a 62-point outing against Oregon. However, Utah struggled to move the ball on those rare occasions when the team fell behind by more than one touchdown. Yet, the Ute offense – especially Williams – proved tonight that it has enough firepower to score in any situation. Whether it’s establishing the run early in the contest or running the four-minute offense on a game-winning drive, this year’s squad has what it takes to get the job done.

Simply put: the Utes’ offensive fireworks against USC show that the team is a contender in the Pac-12 South. While there’s a lot of football left to play, it’s very clear that the Utah offense is much better than it was a year ago. Given that two of the Utes’ losses last season were by eight points or less, the improvement on offense could mean the difference between tying for the division lead (as it did last year) and playing in the Pac-12 Championship game.