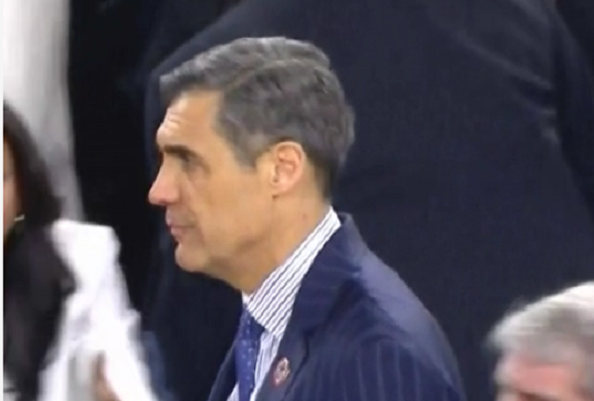 After North Carolina’s Marcus Paige hit a crazy three-pointer to tie Monday night’s National Championship game 74-74, Villanova’s Kris Jenkins responded with a three-pointer of his own (and at the buzzer) to give the Wildcats the title.

One of the greatest moment in the history of college basketball. Everyone — excluding UNC fans, of course — went bonkers! Everyone… except for Jay Wright.

Watch the Villanova head coach react to Jenkins’ buzzer-beating shot like the team just finished off a blowout game against a D-II team in November:

Jay! Dude. I know you’re a smooth customer, and maybe your inner coach felt for Roy Williams and didn’t want to add to his pain. But it’s okay to be excited about winning the national championship, especially when you win like that. Even CBS Sports reporter Tracy Wolfson acknowledged the moment with her reaction.

The Cauldron gave Jenkins’ buzzer-beating three and Wright’s reaction the side-by-side treatment. This is great: