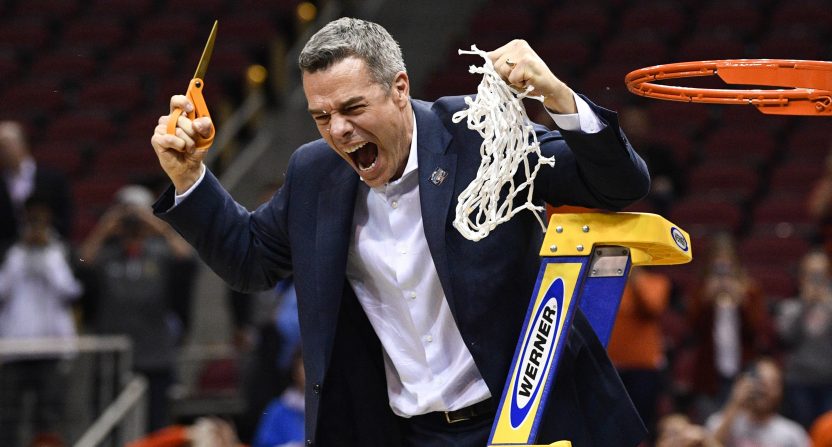 Louisville, Ky. – It was never going to be easy. Not with these tortured programs. In the end, Virginia was as much a survivor as a winner. The top-seeded Cavaliers finally reached the Final Four by outlasting No. 3-seed Purdue 80-75 in overtime to win the South Regional. After last season’s embarrassment of being the first No. 1 seed to lose to a No. 16, Virginia is returning to the Final Four for the first time since the Reagan administration.

The last guy to cut down the net Saturday night was Tony Bennett. This was the ultimate validation for coach who has endured plenty of criticism for underachieving in the NCAA Tournament.

He’s won 74 percent of his games at Virginia since he arrived in 2009 by playing at an unusually slow pace. He won Atlantic Coast Conference championships in a league where he’s — at best — the third-most decorated coach, behind Duke’s Mike Krzyzewski and North Carolina’s Roy Williams.

“It was exhilarating,” said Bennett, who team rallied from a 10-point first-half deficit, squandered an eight-point second half advantage and trailed 70-67 in regulation with 16 seconds left. “It was great. There was a burning desire to get these guys to a Final Four and hopefully beyond.”

Final Fours now run in the family. Watching from behind the Virginia bench was Bennett’s father. Dick Bennett, using a similar deliberate style, coached Wisconsin to the 2000 Final Four. Back then, Tony Bennett was a staff volunteer when the Badgers beat Purdue in the Elite Eight. Now, Tony Bennett has a Final Four he can call his own – by also beating Purdue in the Elite Eight.

“I’m so happy,” Dick Bennett said. “That seed of doubt is always there. Even in the first-round game (this year), they had to overcome it. This was huge. This team, they’re just gritty. They’re not overwhelming. They just hang tough. What more can you ask?”

It took a small miracle to win Saturday night. But hey, Virginia is used to pulling off miracles at the KFC Yum! Center. A year ago, they staged an improbable last-second regular-season victory over Louisville. This wasn’t quite as stunning, but the stakes were higher. Mamadi Diakite’s jump shot as time expired sent the game to overtime.

After Ty Jerome missed the second of two free throws with 5.9 seconds left, Virginia was down 70-68. The Diakite managed to tap the rebound into the backcourt where it was chased won by Kihei Clark. Clark made the long pass to Diakite who made the key short jumper.

“I was happy and ready for the next five minutes,” Diakite said. “I don’t know how to talk about it. It was unbelievable.

“(For), Mamadi to catch it and get it off that quick, so improbable,” Bennett said. “(Last year), what happened here, we’ve had amazing games here and comebacks.  I was almost in shock a little bit.”

So was Purdue (26-10). The Boilermakers, a heartbeat away from its first Final Four since 1980, experienced heartbroken. They had been 3-0 in overtime games, including Thursday’s 99-94 escape over No.2 seed Tennessee. What made the feeling worse: Purdue had a significant crowd advantage. At least 70 percent of the 21,623 in attendance were rooting for the Boilermakers. The West Lafayette campus is 182 miles away.

Purdue somehow, someway lost a game in which it shot 49.1 percent and saw scoring machine Carsen Edwards pour in 42 points. The last of his 10 three-pointers put the Boilermakers ahead 69-67 with 1:10 left to go in regulation.

In overtime, De’Andre Hunter’s lay-up with 28 seconds left put Virginia ahead for good, 76-75. After a Purdue timeout, the virtually unstoppable Edwards missed a three-point shot. Kyle Guy’s free throws with five seconds to go helped salt this one away. Guy shook off a poor shooting first half to score 21 of his team-best 25 points after halftime.

“I was definitely flashing back to when I was on my knees last year, and I did it again,” he said. “And that was just, you know, just overflowing with joy.  So happy for my teammates and my coaches and for myself to be able to break through in the way that we did this year.

“Not only did we silence his critics, we silenced our own and we’re so grateful for our fans that traveled and have always believed in us.”

Watching this unfold was the greatest player in Virginia history. It’s easy to find 7-foot-4 Ralph Sampson in a crowd. Sampson led the Cavaliers to the 1981 Final Four.

“I’m so glad that somebody like Tony Bennett, great coach, great person, can get UVA back to the Final Four finally,” he said. “It’s overdue.”

When someone asked Tony Bennett about the greatest achievement of his coaching career, he recalled something his father said 19 years ago after Wisconsin reached the Final Four.

“He said this: ‘It doesn’t compare with faith, with kids, family, grandkids,’” Tony Bennett said. “He said because I know what truly matters. It enables me to enjoy what seems to matter like this. I’ve remembered that quote and tried my best to live by it.”