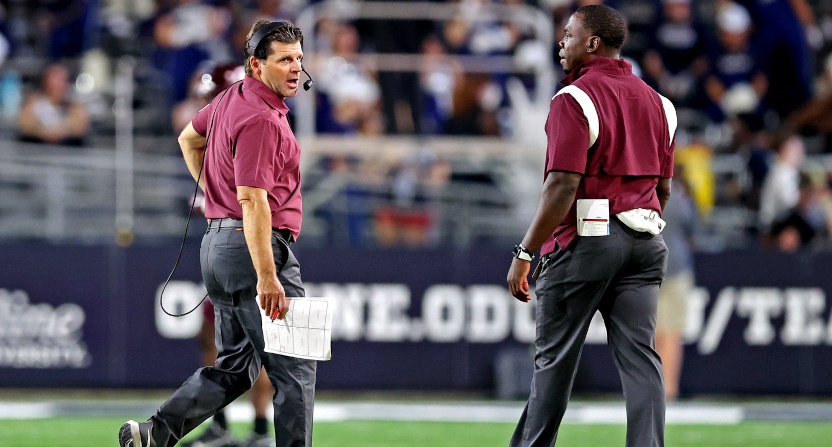 The Virginia Tech Hokies started the 2022 college football season off on the wrong foot with a 20-17 loss at Old Dominion Saturday. The Hokies outgained the Monarchs by 95 yards and recorded 20 first downs against 13, but were doomed by five turnovers. They also saw their coaches trapped in an elevator, delaying the start of the second half, and they finished the first half with an incredible botched field goal that turned into an Old Dominion touchdown. Oh, and, as they announced Sunday, their players found items missing from their locker room:

In addition to losing at ODU, the Virginia Tech athletic dept. announces that there were items missing from the VT locker room following the game vs ODU in Norfolk. "The university is working with law enforcement and Old Dominion on the matter, and will have no further comment."

This was the second recent loss at Conference USA’s Old Dominion for the ACC’s Hokies. They fell 49-35 there in 2018. And it was a remarkably bad night for them all around, as ESPN’s David Hale noted:

Every few years I’ll be somewhere that Dippin’ Dots are sold and I think, maybe they’re not as bad as I remember, and I buy some and immediately regret it, all while knowing I’m destined to go thru this same process again in 2 years.

And that is how I would describe VT-ODU.

Virginia Tech does have a new head coach in Brent Pry (seen at left above), previously the defensive coordinator at Penn State. They also have new coordinators on both sides of the ball. So some growing pains are perhaps to be expected. But a Power Five team losing a road game against a Group of Five opponent is always rough in general.

And this particular loss was much more painful for the Hokies still, especially with the turnovers (including four picks from quarterback Grant Wells, plus the field goal turnover) and elevator mishaps. And these reports of stolen items from the locker room only add to that. We’ll see if any progress is made on recovering those. But it is notable that the Hokies are currently scheduled to play at Old Dominion again in 2024, 2027, 2029 and 2031.