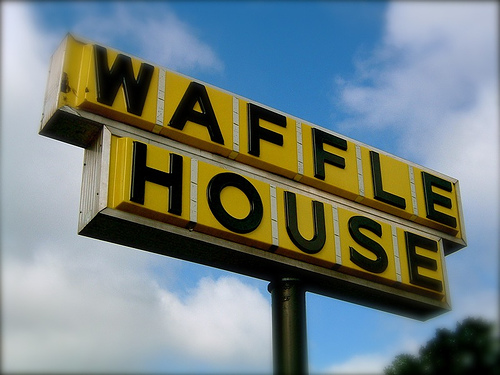 On Friday November 25th, the University of North Carolina Tar Heels will face off against the North Carolina State Wolfpack. Not only will bowl positioning be on the line, but also lots and lots of waffles will be up for grabs.

The 2016 Waffle Wager, as it’s called, will pit Basic American Foods, C.H. Guenther & Son, Inc., and Royal Cup Coffee & Tea, three Waffle House restaurant suppliers, against each other. The trio announced the fourth annual Waffle Wager that will take place as a result of the UNC-NC State game on the 25th.

“While the Carolina-State game goes back to the 1890s, there is even more on the line this year,” Walt Ehmer, Waffle House President and CEO, said. “The Tar Heels and Wolfpack are playing for more than just bragging rights—they are playing for free food for their fans. Now that’s pressure.”

Fans of the winner will receive free hashbrowns, waffles, and coffee at a local Waffle House in Chapel Hill if UNC wins or Raleigh if NC State prevails. Basic American Foods and C.H. Guenther will pay for the food if the Wolfpack wins, while Royal Cup will pay for fans if the Tar Heels claim victory. A time, date, and location for the winners will be announced after the game.

There is a charitable aspect to it as well. Waffle House, Royal Cup, C.H. Guenther, and Basic American Foods will collectively donate $10,000 to the general scholarship fund at the winning university.

“We won’t ‘waffle’ on this and are looking forward to Carolina ‘scattering, smothering and covering’ State so Royal Cup will be paying the tab,” Mike Villano, Basic American Foods Vice President of Sales and Marketing, said.

“Not so fast my friends,” says William E. Smith, Jr., Chairman of Royal Cup Coffee & Tea. “The Wolfpack will have all of the Waffle House coffee lovers rooting for them. We’re looking forward to treating the State fans and having the waffle and hashbrown companies pay for it!”

The first Waffle Wager took place in 2013 between Royal Cup and C.H. Guenther during the Alabama vs. Texas A&M game. With the Tide winning 49-42, C.H. Guenther paid for Alabama students to enjoy free food.

The release stated nearly 8,000 waffles, 7,000 orders of hashbrowns, and 4,000 cups of coffee have been served to the winning college students and fans. At the same time, $25,000 in scholarship money has been donated to the winning universities.

The reason why the three companies are involved is that all play a role in supplying Waffle Houses across the country with products. Basic American Foods supplies Waffle House’s hashbrowns, C.H. Guenther does the waffle mix, and Royal Cup makes the coffee.