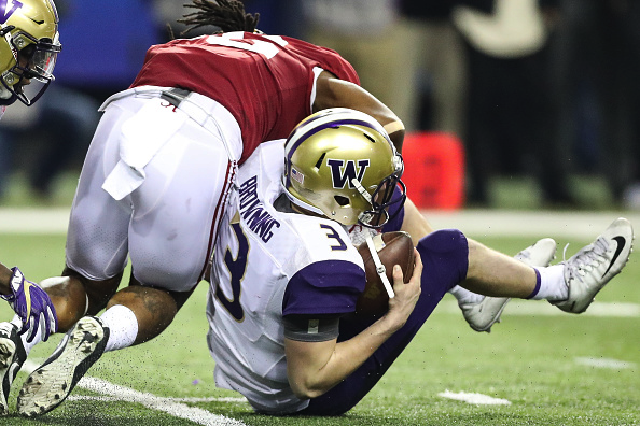 The Washington Huskies were not supposed to beat the Alabama Crimson Tide on New Year’s Eve, and they didn’t. The 24-7 score was more a product of the Tide deciding not to over-exert themselves than UW keeping it close for much of the game.

The Huskies scored first in the Peach Bowl matchup, then wouldn’t get on the board again. It’s how Alabama typically does things. You give them your best shot early, then they take notes, adapt, and smother you.

There’s no shame in losing to the Tide, but for Washington that goes double. Though the Huskies were talented enough to win the Pac-12 and defeat 12 of 13 opponents prior to the Peach Bowl, they were obviously a rung below the other three College Football Playoff participants in terms of talent, support and resources.

This has become a common theme of college football – or rather, it’s always been one. It’s just more apparent today.

In the first three years of the Playoff era, we’ve seen power programs take home two titles, and a third will go to either Alabama or Clemson when they face off in the National Championship. The 12 Playoff participants to this point have been predominantly power programs. Alabama has been there three times, while Ohio State and Clemson have two trips apiece. Florida State and Oklahoma account for the other power program bids.

The remaining berths have been reserved for the “interlopers” – the non-power programs that get in despite talent and/or resource deficits. Oregon fit the bill in 2014. Despite the copious funds provided by Nike, the Ducks still don’t recruit to the same level of the other names above. Michigan State was 2015’s representative, and they were predictably hammered by the more talented Tide. Alabama drew the interloper card yet again for 2016, casually knocking off Washington.

None of those teams won it all, and only Oregon managed to win a game (before the Buckeyes pounded them in the championship).

While the Playoff era pushes a mantra of being more inclusive (and on its face, it’s more so than the previous system), it’s actually provided a clearer picture of just how exclusive college football is, and has been.

In the BCS era (1998-2013), only two interlopers even got a shot at playing for a title, so the separation wasn’t nearly as apparent. Oregon (2011) and Virginia Tech (2000) both lost their chances at championships, then skulked away to make room for the power programs to collect their preordained titles.

Over three years ago, SB Nation’s Bill Connelly looked at which teams likely would’ve made the Playoff in those seasons from 1998 to 2013, and the results bore out similarly to what we see in practice today. The 2009-2012 seasons actually yielded two interlopers per season, but most of the years before that featured one or zero interlopers at all. A quick look at the interlopers through those years (though please consult Bill’s piece for the full reasoning on each):

This list doesn’t just yield the names of teams, but the narratives that could’ve potentially changed – and the ones that did, too. If Oregon makes the College Football Playoff four times in a 15-year stretch, then loses the title game to Ohio State after 2014, there’s a case to be made for them as a power, championship or not. TCU was building itself into an eventual Big 12 team and later, Big 12 contender when it’s given these two bids above. Would the current committee hand them a top-four spot? No Group of Five team has gotten close yet in three years.

Those years from 2009 to 2012 are the time period which supposedly shaped the need for a playoff system in this sport. Yet not for the reasons you’d think. The idea of giving those teams (typically slotted in at third or fourth) a shot is a ruse.

The first reason was always about the television revenue that the top conferences could (and do) take in from a playoff. The other reason was to find an even stronger way to keep college football’s status quo intact while quieting critiques about how “open” it really is to all 128 or so (130 next year) teams.

A system in which the schools with the most resources get to play one another on an enormous, elimination-based stage is not great theater… if you bill it that way. If you say any of the 128 teams can get in – or even any of the 65 power conference schools (plus Notre Dame) can, that’s a product which starts to grasp onto why people are transfixed by March Madness each year.

The reality, however, is that the schools with the top resources will always outlast the interlopers. The Group of Five’s access to a bowl spot isn’t the College Football Playoff’s way of rewarding a season of punching above your weight. That’s what the interloper spot in the semifinal games are for.

That team may not always be seeded fourth (Oregon was No. 2 in 2014), and they may not always be miles behind the other participants in terms of talent and resources (again, Oregon’s close on the latter). But having that non-power hanging around somewhere near the top has always been essential to the selling point of college football. That’s why the bowls exist and grow. That’s why the Big East kept its auto-bid throughout the BCS era, despite being ravaged by realignment. Even if they have minimal chances to win, the image of them having a chance to do so is all that’s needed to sell this product.

One year, maybe soon, you’ll see a College Football Playoff of Alabama, Texas, Ohio State and USC, or some similar permutation. The richest of the rich matching up against one another, to see who can stand atop the highest hill and shout the loudest for the next 12 months.

That sells for sponsors, but will it sell for fans – especially the less-invested ones? Chances are ESPN will be backpedaling for an underdog story in there somewhere. There’s simply no way they’ll let the faults of college football (their largest property) and its inclusive selling points start to show. That pitch has worked for over 100 years. Why would college football suddenly change the formula?