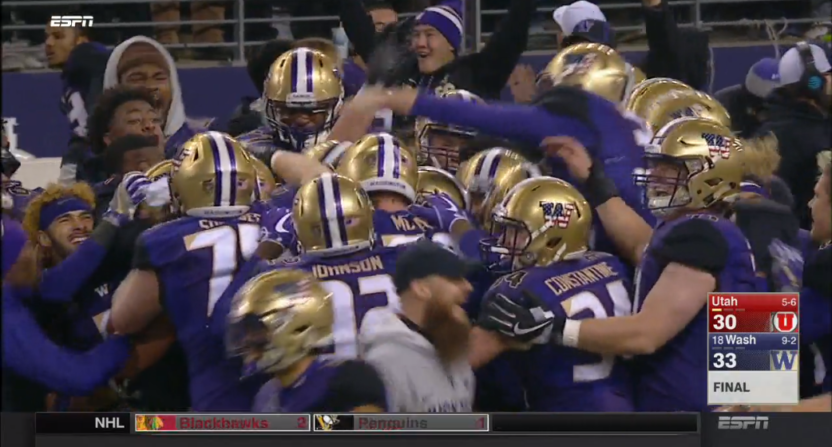 Utah head coach Kyle Whittingham has some explaining to do. In a tied ballgame that was clearly heading to overtime, Whittingham called for a timeout, giving Washington head coach Chris Petersen a chance to rethink his strategy. And it paid off in a big way, courtesy of a game-winning field goal as time expired.

Let’s walk through this piece by piece.

Utah had punted the ball away to Washington with just 29 seconds left to play in regulation. Having already battled back to tie the game at 30-30 and with the football at their own 28-yard line, Chris Petersen seemed content to get the game to overtime and take his chances there. On first down, Myles Gaskin ran for a short gain of two yards, with 23 ticks on the clock remaining. But then Kyle Whittingham and Utah called for a timeout.

ESPN analyst Rod Gilmore tried to defend why you would be calling a timeout in this spot, for some reason. As far as Gilmore could see it, Utah was hoping for Washington to cough up the football. But this is just a poor decision by the head coach here, and it was one that should have been addressed right away from the broadcast. There was simply no reason for Utah to call a timeout here, and to come up with an excuse for it was unfair to the viewer.

But okay, maybe Washington would still play for overtime on second down. Right?

If you thought that, then you have not been paying close attention to Chris Petersen over the course of his career. He is known to take advantage of an opportunity, and he was not about to just settle on overtime now that Whittingham just gave him a chance to come up with a couple ideas. As the teams lined up once again, Washington was ready to strike. Jake Browning then proceeded to complete a pass to Dante Pettis for a gain of 18 yards on the right sideline. More importantly, Pettis was able to step out of bounds to stop the clock.

Now with a chance to play for a field goal, Browning again took to the air and completed a pass to Andre Baccellia for a gain of 31 yards to the Utah 21-yard line. Utes defenders were beside themselves, as the impending doom was weighing down on them after their coach made a bonehead decision.

At this point, there was nothing else to do for Utah but hope Washington would miss a field goal. Considering Washington ranked 117th in the nation in field goal percentage entering the game, those were not terrible odds. But the football gods have a way of punishing a coach for his coaching sins and they would not allow Whittingham to escape this sin.

As fate would have it, Tristan Vizcaino’s 38-yard attempt had no problem going through the uprights as time expired.

There is no sugar-coating this one. Whittingham overthought the situation and Petersen took advantage of it. Maybe Utah would have lost to Washington in overtime, but Whittingham’s bizarre use of a timeout ended up blocking us from finding out. He let his team down, and it may end up costing them and the Pac-12.

Utah now must win next week against Colorado if the Utes are to go to a bowl game. Colorado is also in a must-win situation for bowl eligibility. With only one team guaranteed a win next week, the Pac-12 could be missing out on an extra bowl team this season. Had Utah either held on or beaten Washington in overtime, and Colorado beaten Utah next week, that would be sending both teams to a bowl game. As it stands now, there will be some lost bowl revenue to share for the conference now.