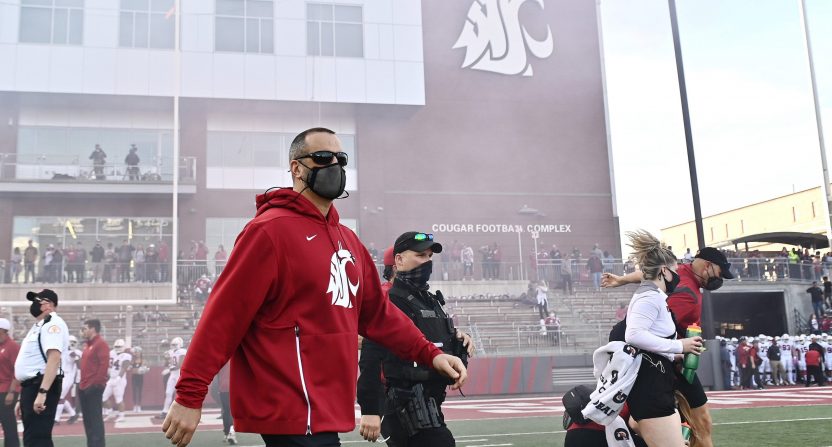 The situation about Washington State football and Nick Rolovich has been boiling up for weeks now as the head coach has refused to get vaccinated in spite of the mandate for state employees. It all culminated on Monday when WSU fired Rolovich for cause. The termination also included multiple assistant coaches who were not vaccinated either.

Nick Rolovich has been terminated by Washington State, per a university source.

Terminated for cause, along with the other unvaccinated WSU assistants.

I can confirm @johncanzanobft report that Nick Rolovich is out as the WSU coach, per source.

Jake Dickert is expected to be named the interim coach.

Rolovich has been cagey since before the college football season started when it came to saying whether or not he’d get vaccinated against COVID-19. Rolovich didn’t attend Pac-12 Media Day because of his unvaccinated status, which only ratcheted up the spotlight and interest. While not required at the time, it was assumed that most college football programs would push for coaches and players to get vaccinated to avoid forfeit situations, not to mention the general health and well-being of their community.

But Rolovich refused to engage on the issue, often stymying reporters at press conferences over mundane yes-or-no questions.

Washington State football coach Nick Rolovich, the state's highest-paid public employee, hasn't said if he will get a COVID shot – only that he will "follow the mandate." This series of questions from @ChrisDaniels5 should be shown in journalism classes

Washington governor Jay Inslee announced in August that all state employees would be required to be vaccinated unless exempted by October 18. As the head coach of the Washington State University football team, Rolovich is the highest-paid state employee in Washington, making the outcome a referendum of how seriously the school and state would be taking the mandate.

Rolovich initially said he would “follow the mandate” but was elusive about details. It later became clear he had no intention of getting vaccinated, setting up a showdown between him and the school. Rolovich did apply for a religious exemption but he did not receive it (not to mention that Rolovich is Catholic and the Pope has backed getting the vaccine). Meanwhile, a story in the NY Times seemed to imply that the school was getting buttoned up to take action assuming the exemption wouldn’t go through.

"Today could actually be the last game Nick Rolovich coaches as the Washington State head coach"@BruceFeldmanCFB has more on the vaccine mandate that is making things complicated for the Cougars' head coach ⬇️ pic.twitter.com/HSCDAVyvLR

In the interim, the Cougars have played up and down all season. They’re coming off a big win over Stanford that moved them to 4-3 overall, riding a three-game winning streak. And while a Pac-12 North title isn’t out of the question, it speaks to the kind of distraction that Rolovich is causing that the school would want to move on from him regardless of their current momentum on the field.

After the game, Rolovich seemed to understand this might be his finale with the Cougars, telling reporters that while he is “waiting on an email” to see if his exemption would be granted, “I don’t think this is in my hands.” He was correct and it appears the exemption request did not go in his favor.

And so, as the deadline arrived on Monday, the writing was on the wall for Rolovich, who stuck to his convictions but lost his lucrative job and tarnished his reputation in the process. On Sunday night, it became clear something was coming when the school didn’t send out its usual notice about Rolovich’s weekly press conference.

May not be worth reading into, but #WSU has always sent out an email notice to reporters about Nick Rolovich’s weekly Monday webinar. Email has always come by, or slightly after, 7 p.m. No email tonight.

Bumping this to 99% chance of decision today.

And sticking with my hunch https://t.co/C8mAPAnUej

As Monday rolled on with no word of the usual press conference, there was mention of a mandatory player meeting with the school’s AD in the afternoon specifically to discuss Rolovich’s future with the program.

According to @JasonPuckett20 on KJR, #WSU AD Pat Chun is holding a mandatory meeting with players at 5:30 p.m. to discuss Nick Rolovich’s future with the school. We still haven’t received emails regarding Rolovich’s weekly 2 p.m. presser or the week’s practice schedule.

The news of Rolovich’s firing finally came around 4:30 p.m. PST.

The school did have several options they could have taken with Rolovich, such as regular COVID testing or moving Rolovich to a role that doesn’t interact with the public. But it’s pretty hard to be the head football coach of an FBS program without being hands-on, available for media appearances, available to appear in public, and able to visit with recruits across the nation.

Ultimately, Rolovich made his choice and left WSU with none.