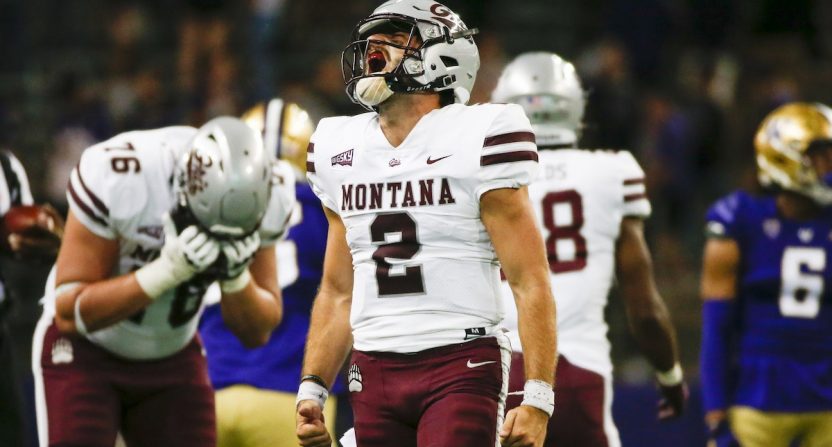 Montana looked like a suitable season-opening warm-up for No. 20 Washington ahead of its Week 2 prime-time clash with Michigan. The Grizzlies played only two games in the spring after having their fall 2020 schedule canceled. Not to mention that Montana plays at the FCS level with the Big Sky Conference.

The Grizzlies are the 5th FCS team to beat an AP-ranked FBS opponent since D-I split in 1978. pic.twitter.com/7UCOzlMtY4

Instead, the Huskies travel to Ann Arbor next week coming off suffering the worst upset in school history, losing to the Grizzlies at home, 13-7, Saturday night.

With the win, Montana becomes the fifth team to defeat a team ranked in the AP Top 25 since Division I was split into I-A and I-AA in 1978. The last time a FCS team beat a ranked FBS opponent was in 2016 when North Dakota State defeated No. 13 Iowa.

The Huskies scored on their opening drive, going 78 yards in nine plays, finished off by Morris running a quarterback sneak for a touchdown. But Washington couldn’t score for the rest of the game.

To be fair, the Huskies were missing their top three receivers, Terrell Bynum, Rome Odunze, and Jalen McMillan, And a fourth, Ja’Lynn Polk, left the game with an arm injury in the first quarter.

Montana had little success on offense until the Huskies’ defense finally broke down in the fourth quarter. Quarterback Cam Humphrey — a Seattle native — scored on a four-yard run to give Montana a 10-7 lead. That turned out to be the winning score with 10:35 remaining in the quarter. Kevin Macias added a 22-yard field goal with 2:54 left to give Montana its final margin of victory.

Not a sentence I expected to read heading into Michigan/Washington in Week 2. https://t.co/hRurCqBckR

Interestingly, one of the receivers who did play for Washington, Giles Jackson, dropped a pass on a fourth-and-two play with 1:33 remaining that ended the Huskies’ final chance. Jackson transferred to Washington after last season from Michigan, where he played the previous two seasons. He’ll face his former team next week.

Suddenly, that Washington-Michigan match-up takes on a different angle. The Wolverines might break into the Top 25 after their 47-17 win over Western Michigan, while the Huskies will likely fall out of the polls. Will Washington have more edge after an embarrassing season-opening loss or might Michigan be more formidable than it appeared going into the season?

But let’s end by celebrating Montana and a signature win for coach Bobby Hauck and his program.

Get your celebration on, @MontanaGrizFB!!! 🎉