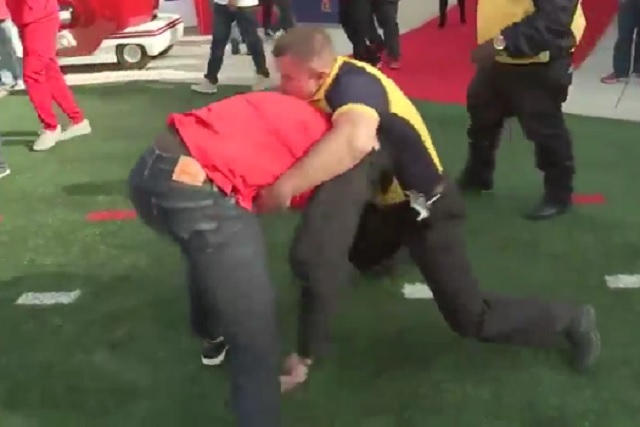 The University of Houston football team clinched the American Athletic Conference championship, a 12-1 record and a likely New Year’s Six bowl bid with a 24-13 victory over Temple on Saturday. Unfortunately, the victory was somewhat marred by footage of on-field security assaulting Cougars fans rushing the TDECU Stadium field to celebrate their school’s win.

Following the game on Saturday evening, several videos were posted online from spectators in the stadium and on the field of security personnel from CSC Event management pushing, tackling, wrestling and at least in one case, punching fans who attempted to get past the guards and join the celebration.

Some fans were able to make it on the field following today’s win. The rest of Coogs fans? Not so fast. #abc13 pic.twitter.com/nYTUezcXW8

This wasn’t just a matter of crowd control, which is what CSC is hired to do. As you can see from this video, there are outright assaults on many fans from security guards who felt that much more action than stepping in the way to obstruct or prevent people from taking the field was necessary. But some wearing those distinct yellow shirts were extremely overzealous in their methods, invoking John Cena or J.J. Watt in their takedowns of civilians.

Having viewed the footage of these assaults widely available online, Houston athletic director Hunter Yarachek issued a statement expressing his dismay over the actions of particular security staffers and said both a termination of the school’s contract with CSC and legal action are under serious consideration in light of these incidents.

Though what happened in Houston is obviously much more serious, this was not the only of CSC personnel taking their responsibilities a bit too seriously and attempting to exact more power than their status as for-hire security allows. On Tuesday at the University of Georgia, security guards attempted to prevent players from talking to reporters after meeting with dismissed coach Mark Richt. In some cases, guards interrupted interviews and escorted players away before they could finish making their remarks.

By and large, most people hired to work security at events do their jobs and understand their duties. But as so many of us have likely experienced, a few rogue personnel let their presumed power cloud their judgment and feel like that “CSC Event Staff” shirt acts as a badge. Yet even if some might act with a bit too much fervor in checking you for sneaking food or booze in, shining a flashlight at you if they think you’re smoking, or preventing you from rushing the stage at an event, there’s obviously a big difference between taking preventative measures (such as stepping in the way or even pushing when necessary) and acting maliciously with tackling, wrestling takedowns and punches.

Some of the actions seen in these videos are downright obscene — other stadium personnel seems to be telling security to calm down, which isn’t the way this is supposed to work — and it’s encouraging that university officials are making it clear that such behavior isn’t acceptable.