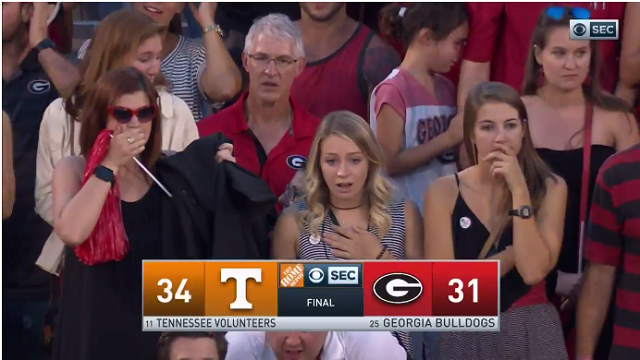 In yet another example of why college football is the ultimate sport to deliever a full 180-degree flip on the emotions scale, Tennessee stunned Georgia is one of the craziest finsihes we have seen in some time. Georgia looked to have captured a big win in division play with a 47-yard touchdown pass with just 10 seconds to play, but the Vols answered back with a 43-yard pass for a game-winning touchdown of their own. You had to see it to believe it (this particular author missed it).

The final pass freshman quarterback Jacob Eason would throw on Saturday afternoon was a beauty. But before getting to that point, Eason also had to complete three straight passes starting from Georgia’s 19-yard line to even start to think about a late scoring opportunity. A 16-yard pass to Terry Godwin was followed by an 11-yard pass to Isaiah McKenzie and a 12-yard gain to Jeb Blazevich. Then came the dime. A 47-yard throw down the left side of the field found the sweet spot in the hands of Riley Ridley for a go-ahead score that, would send Georgia fans into a short-lived frenzy…

Tennessee fans in attendance were distraught. I can’t believe we blew this game! Butch Jones needs to go!

But Georgia left Tennessee too much time.

Tennessee’s last gasp came after a 48-yard kick by Georgia kicker Rodrigo Blankenship was returned 20 yards by Evan Berry to the Tennessee 40-yard line. Georgia then gave Tennessee five more free yards with an offside penalty. Would that five yards make the difference? Surely not. But who knows what happens if not for the offside penalty. Surely the odds were still against the Vols with only precious few ticks left on the clock and so far to go. Georgia still has this one wrapped up.

Joshua Dobbs uncorked a 47-yard bomb to Jauan Jennings as the clock expired for the win.

Tennessee wins, in most remarkable and unpredictable fashion. Nothing has come very easily for the Vols this season, so why should this one have gone without needing to dig up another Hail Mary play that burns Georgia’s secondary?

UPDATE: Casey Wheeless of WVLT took this awesome video in the back of the end zone of the final touchdown and ensuing celebration.