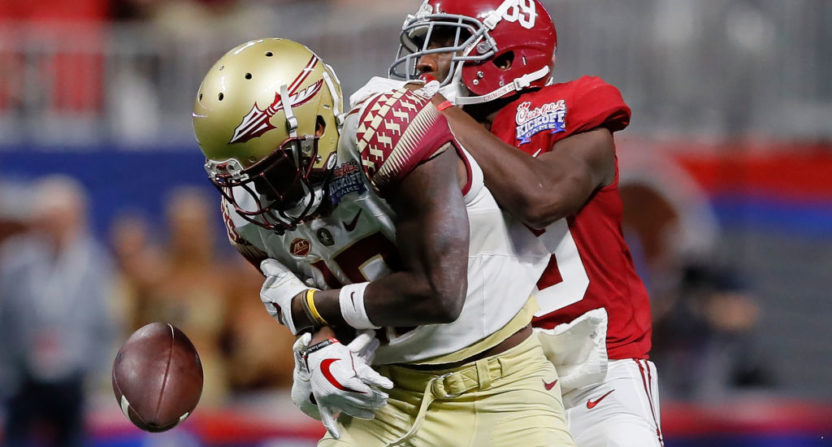 In college football, pretty much every game still matters. FOX is repping the notion with its “Every Game is Everything” campaign to hype up games. In many ways, it’s still true. We are no longer in the BCS era, where one loss almost assuredly ended national title aspirations, but one loss still can do that. A second loss is a nail in the coffin. For those teams that picked up losses in Week 1, it’s easy to see that coffin closing.

Remember, though, that every Playoff champion so far has lost one regular-season game. In two of the three cases, that loss came very early. The four-team Playoff gives the best teams one chance to recover. A loss doesn’t end the season, though it’s far from recommended to actually lose a game.

So where does that leave us? How are we supposed to look at teams that lost in Week 1? Well, those teams are certainly relegated to the back burner.

Florida State, assuming it can find a suitable replacement for injured quarterback Deondre Francois, has no more margin for error. The same will be true of the Ohio State/Oklahoma, Clemson/Auburn, and Stanford/USC losers next week. We haven’t seen any other expected contenders lose yet, but the lesson remains true through the entirety of the early season.

In three years of the Playoff, we’ve only seen four one-loss Power 5 teams miss out. We haven’t seen any two-loss teams get in. Getting through the season with one or zero losses is paramount. You’re likely to get in if you do that. Lose twice, and it will take a miracle. That’s the constant lesson to remember. It probably won’t matter if a team struggles or how they look, especially the first few weeks. It’s all about the number of losses. Overreacting to anything else is just that, overreacting.

In theory, 128 teams started this season with a chance at the Playoff. There are 130 FBS teams, but neither Coastal Carolina nor Ole Miss is bowl-eligible this year. In reality, almost no Group of 5 team actually has a chance, and not just because the system is stacked against them. (If we’re being honest, we have no idea what the system does to Group of 5 teams because no such team has really been in a position to be relevant to the conversation. Western Michigan last year was the only Group of 5 team to go undefeated in the Playoff era, and the Broncos were nowhere near dominant enough to have a real claim at inclusion. But I digress.)

Eliminations the first week or two of the season might seem silly, as it’s almost entirely ticking off the Group of 5 teams that lose guarantee games to bigger schools. But the P5 eliminations start soon, and they come fast when they start — not to mention that we got one this week. Also, I’m keeping track of the eliminations in a tweet-thread this year, so you can watch the teams tick down from 130 to four, pretty much in the order the eliminations are made. I eliminate a team whenever I am 100% confident that that team cannot make the Playoff, even if it wins out and gets a decent amount of chaos to help.

The trend is relatively recent (last 15 years or so), but the college football world as a whole loves comparing the performances of conferences as a whole, rather than just individual teams, in non-conference play. We have no indication that the selection committee cares about this at all — 2014 seems to be a pretty good indicator that it really doesn’t — but the committee does closely follow the trends of the general college football attitude (why wouldn’t it?), which is certainly influenced by the topics that get a lot of air time on television and radio shows.

The good news for college football this year — so far, at least — is that this conversation should be relatively muted. No conference had a particularly dominant Week 1, and none had particularly poor weeks, either. The ACC picked up four losses, but all of them were more or less respectable, save perhaps North Carolina’s loss to Cal.

On the other hand, the SEC and Pac-12 had pretty good weeks, but neither was particularly dominant. The Pac-12 did not lose a game, but no team in the conference picked up a really noteworthy win, and USC did not look that great against Western Michigan. The SEC picked up several good wins in high-profile matchups, but ugly losses by Florida (the offense was completely ineffective) and Texas A&M (blew a 34-point lead in under 20 minutes) leave a sour-enough taste that the conference can’t really get away with much chest-beating.

The real story of Week 1 in the Power conferences should be the lack of upsets. So far, only two P5 teams have lost to non-P5 teams. Oregon State was run over by Colorado State in “Week 0,” and Baylor was upended by transitioning-to-FBS Liberty. Other than that, we’ve pretty much seen chalk. These are the losses to keep track of, because it’s the bad losses that will really hamper a team’s ranking, which in turn will drag down the ranking of any conference member that it can beat. Week 2 offers plenty of decent chances at these losses, so keep an eye out for them.

The conventional wisdom that the Group of 5 New Year’s Six berth was South Florida’s to lose has been challenged in the Bulls’ first two games. Charlie Strong’s squad has been far from impressive so far, against pretty bad teams. This team is no longer looking like a shoo-in to get through the AAC East unscathed. Quinton Flowers is still one of the most electric dual-threat quarterbacks in the country, but the team around him just isn’t what was expected.

This leaves opportunities for just about everyone else. The AAC still has some quality teams, and Boise State and San Diego State are both lurking in the Mountain West. Western Michigan impressed enough against USC that the Broncos proved a repeat appearance isn’t impossible, and Conference USA has a few teams (mostly Western Kentucky) that we need to keep an eye on as well.

The Sun Belt is in trouble, though. Just about all of the conference’s top teams took losses this week, and most weren’t particularly competitive in doing so. Arkansas State was the lone bright spot, but a game against Miami (Florida) this coming week will almost certainly snuff out any candidacy the Sun Belt has for that NY6 bowl this season.

It’s still way too early to pinpoint what impact individual games can have. Every game is a must-win, and yet the only true must-wins come for those teams that have already lost.

Keep an eye on the ACC, though. After a lackluster — though not awful — Week 1, the conference has three games against P5 foes. Duke and Pitt will be underdogs against Northwestern and Penn State, respectively, while Clemson is favored over Auburn. A 0-3 record in these games will raise serious concerns about the conference’s ability to field a Playoff contender, especially after Deondre Francois’ injury. Similarly, the conference battle between North Carolina and Louisville matters. A Tar Heels win would seriously hurt Louisville’s stock as a contender, given North Carolina’s loss this past week.

It’s a big week for the Mountain West, too, as the conference’s two best teams (Boise State and San Diego State) travel to face Pac-12 foes. Meanwhile, seven SEC teams are playing FCS foes this coming week. Don’t expect any losses in those games, but expect to hear a ton of chatter about it if one does happen.