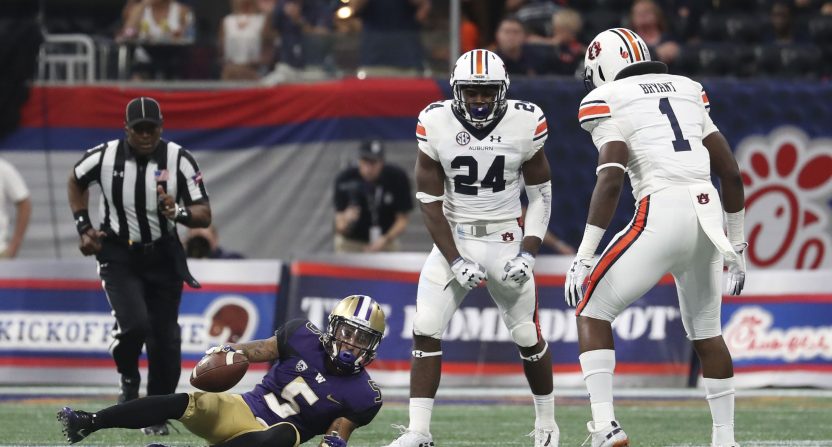 The first — and most important thing — to remember after Week 1, always, is to not overreact. The one thing to realize is that we only really know one thing. We saw one set of games- but you always need more than that to judge teams.

Let’s start with the Big Ten East, because that division came closer than any other to real disaster. Is Michigan State completely overrated? Or is Utah State actually one of the better Group of 5 teams this year? One of those things is likely true; at least one is false. Or maybe they’re both false, and Michigan State just played a bad game. In a few weeks, we can see what the teams have done since and revisit the question.

We can have likely guesses to all of these questions. Any educated football observer can see that Michigan State didn’t dominate in the trenches against Utah State- almost a surefire sign that the Spartans will be weaker than expected this year. Ohio State’s secondary clearly looked lost much of the game, which could post trouble against TCU in two weeks. But — and this is fundamental — we have to be willing to revisit every answer that we think we know to these questions. We have to wait to see far more before we can say anything at all definitive.

Welcome to another season of my CFP Eliminator. If you’re not already following, I’ll be eliminating teams throughout the year in this Twitter thread. I eliminate teams as we reach a stage where, in a year even with extreme chaos, there’s no reasonable scenario for that team to make the Playoff. Obviously, it’s theoretically possible for every team to end up about 6-6. But that is far from reasonable, so I’m not worried about that possibility. 2007 was the most chaotic season in recent history, so my benchmark question always is, “Is there a scenario that gets this team in the Playoff? Does that scenario require significantly more chaos than 2007?” If the answer to that second question is “yes,” then the team is eliminated.

Between Week 1 and the four “Week 0” games, we have eliminated 36 teams from Playoff contention. All of those teams, save one, are from outside the power conferences. The one Power 5 team eliminated this week was Kansas, who lost to Nicholls in overtime.

The Pac-12 entered this season with a perception issue. Going 1-8 in bowl games will do that to you. The conference needed a strong showing out of the gates in order to gain some respect on a national scale. Instead, the Pac-12 did just the opposite.

I’ll start with the good part. Stanford avenged last season’s loss to San Diego State by dominating the Aztecs. Even that bright spot had a bit of a drawback- Bryce Love underperformed tremendously. Love staying in the Heisman conversation would keep some good attention on the Pac-12. Instead, he already set himself way back in chasing the stiff-arm trophy.

Now for the bad part- just about everything else. The only team to pick up a win that might be valuable was Washington State, who dominated Wyoming on the road. The Cowboys look like a solid Mountain West team, and may have the potential to be more. Every other win was over a team that is somewhere in “cupcake” status, but it’s the losses that hurt the most.

The conference only picked up three losses on the weekend, but every one of them was brutal. Washington fell to Auburn in a game that the Huskies should have won any way you look at it. The loss doesn’t hurt so much as it represents a missed opportunity. I doubt the selection committee will punish Washington for losing this game, but a win would’ve  brought the program and the conference some much-needed respect. On top of that, UCLA fell to Cincinnati in embarrassing fashion in Chip Kelly’s debut, and Arizona was manhandled at night by BYU in Kevin Sumlin’s debut.

The conference will have a few more chances to get big wins- Stanford and USC both play Notre Dame, UCLA visits Oklahoma, and Arizona State hosts Michigan State. That’s not a lot of opportunities, though- and if the conference doesn’t win at least two of these, it’s hard to see any team getting a Playoff bid unless it goes undefeated.

The SEC went 13-1 in its opening weekend. Not only were several of the wins against good teams, but the wins looked impressive to boot. (As I said in the opening, in a few weeks we’ll revisit how impressive or not everything from Week 1 looked. But some of these games definitely made statements.)

Alabama looked unstoppable. LSU dominated Miami, though the game was much closer than the final score (or the 33-3 fourth quarter score at one point) indicated. Ole Miss impressed against Texas Tech. And, as mentioned, Auburn got the big win against Washington.

There were plenty of cupcakes on this SEC schedule, and there are still plenty of chances for conference teams to slip up, but after one week the SEC looks to be putting its teams in prime position for the Playoff race.

Week 2 looks to be a relatively weak slate, but there are some hidden gems with serious CFP implications. First of all, Michigan State vs Arizona State and UCLA vs Oklahoma are huge for the Pac-12. If the conference wants to see some teams viewed as quality opponents for its top teams, a win in one of these games would be crucial. Colorado also faces Nebraska. There are no solid expectations for the Cornhuskers in Scott Frost’s first year, so that probably won’t be viewed as an elite win, but it would at least be something.

There aren’t too many major power conference matchups — though watch out for Penn State vs Pitt– so the games to keep an eye on are those between decent Group of 5 teams and Power 5 teams. Major upsets can happen, that’s always true. But it’s the games in the middle of the conference that draw attention. Games like Fresno State vs Minnesota, Wyoming vs Missouri, and Georgia Tech vs South Florida can have subtle implications moving forward.

For better or worse, the number in the L column is still king in college football. Every extra loss that a middle-of-the-pack Power 5 team picks up is one that makes a win over them look less valuable (or a loss to them look worse) as the season goes on. So games like the one mentioned above can be what turns a team like Minnesota or Missouri from being viewed as a fringe Top 25-40 team to being viewed as just another mediocre Top 50-70 team.