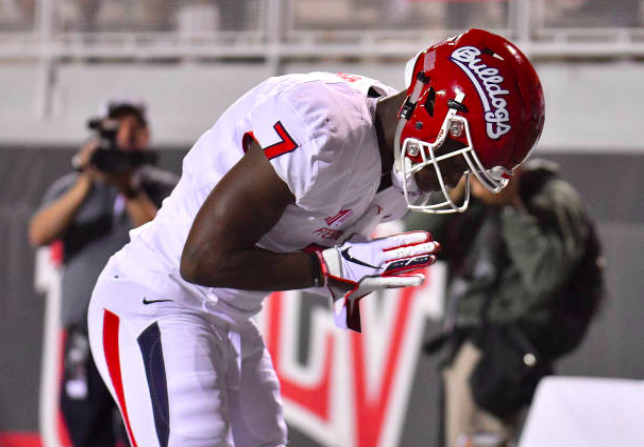 If we look at last year, we had 15 teams alive in the Playoff race at this point. This year there are 13. That might not seem like a big difference, and maybe it isn’t necessarily. The differences, though, are far greater than just the number of teams still alive.

In addition to the 13 teams remaining, there are only two more two-loss Power 5 teams. That’s it. Two. Of the 13 contenders, Syracuse, Boston College, and N.C. State already have two losses. Syracuse and Boston College still have to play each other. Syracuse will also play Notre Dame in two weeks. We also already know that Georgia and Alabama will face each other in the SEC Championship Game. Oklahoma and West Virginia have yet to play each other, and will likely face each other twice.

What does all of this mean? Two years ago, I wrote about how certain teams had a one-game lead on the field. That was how Clemson and Ohio State easily survived losses to make the Playoff, and Washington did as well. Well, this year we’re looking at teams with a potential two-game lead on the field. Who would the selection take, 11-2 Alabama or 11-2 Washington State? 11-2 Oklahoma? Alabama can lose its final two SEC games, and as long as the Tide beat Georgia, all Alabama needs to get in the Playoff is a loss by Washington State and for Oklahoma and West Virginia to split their (likely) two games. The same scenario holds true for Clemson, as long as Boston College doesn’t win the ACC.

Ohio State has looked terrible in its past two games. The Buckeyes would still likely be a Playoff team if they lose to Michigan State but win out. There are only three real contenders ahead of a two-loss Ohio State team: Oklahoma, West Virginia, and Washington State.

Good news for the SEC… and UCF

This dearth of contenders is music for the SEC’s ears. If Georgia wins the SEC Championship Game–unless Alabama also loses at least one of its final two SEC games–the conference only needs a few results to have broken its way to get two Playoff teams. Again, if Washington State, Oklahoma, West Virginia, Ohio State, and Michigan all lose one more game, then Alabama will be a Playoff lock before even taking the field on December 1st.

Clemson needs even less than that. We won’t see the Tigers jumped by the ACC Coastal champion even with an ACC Championship Game upset. No one in the Coastal has anywhere close to a Playoff resume. Clemson can very likely take the field for the ACC Championship Game knowing it has a Playoff berth locked up. This was a situation the CFP never wanted to happen, but that’s what this year has led to. A combination of dominant top teams and literally no “second tier” waiting right behind them led to this.

This situation is also a dream scenario for UCF. Back when the Playoff started, I said that a Group of 5 team needs two things to get in. It needs multiple consecutive great seasons and for the P5 contenders to falter. Well, UCF checks off both boxes, in major ways. The Knights haven’t lost in two seasons and own the nation’s longest winning streak. Also, there are just no P5 contenders left. This isn’t like last year, when the committee put three-loss teams ahead of UCF. The only three-loss P5 team with a resume deserving to jump UCF is Auburn, if the Tigers can manage to beat both Georgia and Alabama.

The news is even better for UCF than just that. There also just aren’t any two-loss P5 teams. The Knights will jump both Kentucky and LSU if they win out. They’ll jump Ohio State if the Buckeyes lose again. They need a few more things on top of that, sure, but UCF having a nonzer0 chance at the CFP feels a lot more plausible than it ever did last season.

We are actually on pace to pass 2007 levels of chaos, but that won’t change how I eliminate teams this season. I touched on in the introduction and I’ll discuss this in full after the section on LSU.

Thankfully, I have never been forced to un-eliminate a team from Playoff contention. This week’s decision to eliminate LSU, though, was one of the toughest ones I had to make. If a team from the Big Ten West wins the Big Ten Championship Game, Washington State loses a game, and the Big 12 sees a little bit of chaos, can LSU get in? Do the Tigers also need a UCF loss? What if Georgia wins the SEC Championship Game? Does the dominance of LSU’s win over Georgia get the Tigers in? Or does the loss to Alabama keep them out?

Ultimately, I’m leaving LSU eliminated. The Tigers need just too much to get back in the picture. Also, the committee will be incredibly hesitant to put LSU in a bracket with a team that already beat them 29-0. But if we do see ultimate chaos and LSU can win its last three games, the Tigers are absolutely in “first team out” territory right now. I freely admit that. LSU is eliminated from Playoff contention because the odds of getting in are infinitesimal. It would take too much chaos. But a path isn’t unimaginable.

I will touch on this more in the coming weeks if the status quo stays, but right now we are seriously looking at seeing two Group of 5 teams in New Years’ Six bowls. The very same factors discussed above means there are very few good candidates for NY6 at-large bids. There are, however, several strong Group of 5 candidates.

First, let’s go over the at-large situation. The semifinal games are the Orange and Cotton Bowls. So as long as the ACC champion is in the semifinals (Clemson almost certainly will be), there is no need for an ACC at-large team. If Syracuse wins out, the Orange will be an at-large team. But even one loss from the Orange probably puts them behind several Group of 5 teams I’ll mention below.

The Rose and Sugar Bowls are guaranteed Pac 12 vs Big Ten and SEC vs Big 12 matches, respectively. No matter who makes the Playoff, we will seems from those four conferences in these games. Therefore, at least both Alabama and Georgia (and maybe another SEC team, if both of those make the CFP) will be out of the at-large pool. The same goes for Washington State, likely the only NY6-worthy Pac 12 team. Similarly, assuming only one team from both the Big Ten and Big 12 make the Playoff, that leaves one of Michigan, Ohio State, Oklahoma, and West Virginia as at-larges. (The other three will be in either the CFP, Rose Bowl, or Sugar Bowl.)

Who’s left in the at-large pool? LSU or Kentucky will be NY6 locks if they win out. At least one Group of 5 team is guaranteed an at-large (or a CFP spot). But if one of the Big Ten/Big 12 four-pack mentioned above loses a few games? Or if LSU or Kentucky drops another game, while Notre Dame keeps winning? Who’s left?

The answer comes from the Group of 5. Right now, Utah State and Fresno State look headed for a collision course in the Mountain West Championship Game. If those teams are each 11-1 when they meet, that will make a strong NY6 resume. Or if UAB can win out (including an upcoming game against Texas A&M), the Blazers will have a strong case. Assuming UCF also wins out, we may very well see two Group of 5 teams earn spots in NY6 bowls. What three-loss team this year would you take over 12-1 Fresno State or Utah State? The answer is not many. After a few more weeks of P5 parity (aside from the very top), the answer will likely be none.

On Thursday night, Wake Forest will challenge N.C. State and possibly eliminate the Wolfpack (and help the Group of 5). On Friday night, Fresno State will try to keep its growing NY6 hopes alive on the blue turf against Boise State.

Alabama’s game on Saturday against Mississippi State might not affect the Tide much, but an Alabama win would certainly knock Mississippi State below Utah State and Fresno State in the NY6 race. The same goes for LSU’s trip to Arkansas (and Kentucky’s trip to Tennessee). If the Tigers suffer a letdown against the hapless Razorbacks, it would be tough to keep LSU above a dominant Mountain West team. A similar interest applies to the Auburn-Georgia game. Georgia is still in the Playoff race with a loss. A Georgia win, on the other hand, would keep Auburn below the Mountain West pair for NY6 purposes.

Penn State hosts Wisconsin in a game with no CFP implications. However, Northwestern will all but lock up the Big Ten West with a Penn State win. A Wisconsin win, on the other hand, would be better for the Mountain West NY6 hopefuls. Ohio State has a tough road game against Michigan State. A Buckeyes loss would be great news for UCF, but the Mountain West pair would like to see Ohio State win. Michigan State has a win over Utah State, so a 9-3 Michigan State team will probably have a strong NY6 resume.

Troy and Georgia Southern face off in a pivotal Sun Belt East matchup, though it means far less with Georgia Southern’s loss to ULM this past week. And keep an eye on Clemson-Boston College. The Tigers essentially lock up a Playoff berth with a win. The Eagles, on the other hand, still control their own ACC Atlantic destiny. If Boston College wins out, we could definitely see two ACC teams in the Playoff.

For now, though, because of the huge lead that the top contenders have on the field, the NY6 race–and if two Group of 5 teams can get in–is far more interesting and immediate than any potential CFP shakeups.