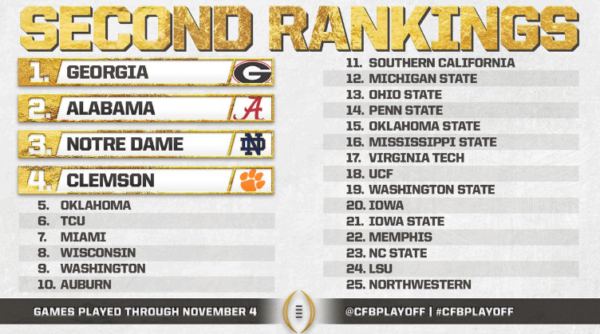 As I mentioned in CFP Implications this week, this week’s disaster for the Big Ten East actually was important for Wisconsin. The East looked worse — with Ohio State and Penn State losing — but the West suddenly looked better. Northwestern suddenly has two ranked wins (Iowa and Michigan State) and only three losses. If not for an early-season bad loss to Duke, ranking the Wildcats would be a no-brainer. Similarly, Iowa suddenly has two ranked wins — and three losses to ranked teams (Penn State, Michigan State, and Northwestern). Both of those teams suddenly made their way into this week’s rankings.

Much of the narrative, even tonight, about Wisconsin has been that the Badgers haven’t beaten anybody. That looked like it was potentially true before the season, and that narrative carried over into the middle of the season. Now, though, it has to stop. Iowa came into the rankings at No. 20, which means that if the Hawkeyes win their final two games after losing to Wisconsin (if Wisconsin loses), then the Hawkeyes will end up ranked at the end of the year. Northwestern needs to win out to remain ranked, but the Wildcats have three of their easiest games remaining.

Michigan remains the only two-loss P5 team unranked, but the Wolverines are still a decent win. At the end of the day, the Badgers are looking at three ranked wins if they win out. 13-0 and three ranked wins is enough to get into the Playoff.

It's well-deserved, too. The Wolverines' best win is… Florida? Minnesota? Maybe even Rutgers? There's good reason Memphis is ahead of Michigan. Michigan has no wins worth anything. https://t.co/sri4XBTmTK

Georgia remains atop the rankings, followed by Alabama. This is the same as last week, which makes sense. Both picked up similar wins this week, and by identical margins. There was no reason to change anything. In fact, from No. 1 down to No. 11, the committee kept with what they did last week. Teams slid up to fill the gaps left as Ohio State and Penn State dropped several spots, but that was it. Similarly, there was much chalk below that. Oklahoma State and Virginia Tech each dropped several spots for their losses, and the teams behind them slid up.

There are two important points within this. The first is that the committee claims to re-judge each team each week, and not base off previous weeks. This theory was apparent during the first year of the committee, but seems to have slid out of use since then. This week, we see it in some ways, but not in others. Northwestern coming into the rankings — on the basis of wins over Michigan State and Iowa getting better — shows the committee starting from scratch, even if the Wildcats only debuted at No. 25. But the lack of changes — except for when a team loses a game or picks up a big win — indicates that the committee isn’t really starting from scratch. If the rankings started over each week, then we’d see weekly changes, even if they are small. After all, every team’s resume changes every week. If the rankings don’t change, that shows that the committee is basing their rankings off last week, at least somewhat.

The second point is that Oklahoma State dropped four spots. The committee has noticeably, on many occasions in the past, not dropped teams for close losses to better team. That didn’t happen with Oklahoma State this week. We’ll have to see if this is an aberration, or part of a new trend by this year’s committee. On the other, N.C. State dropped three spots for a one-possession loss to Clemson — but every team that jumped the Wolfpack did so by earning huge wins. The only team that N.C. State “fell” behind is Memphis, and I have no explanation for that.

Additionally, we also have to discuss Michigan State’s major rise. This makes sense. The Spartans now have the same number of losses as Penn State, and both to ranked teams. This is a clear example of the committee re-evaluating a resume from scratch this week. It seems that the committee is willing to start from scratch when a resume picks up a major change, but otherwise the committee is staying with what it did last week.

Either way, that’s more than USC has, and if both USC and either Michigan State or Ohio State end up at 11-2, I fully expect the Trojans to be jumped by the end of the year. Auburn is another story, though. The Tigers have two losses, but ranked No. 10 and with three potential games remaining against Georgia (twice) and Alabama, the Tigers control their own destiny.