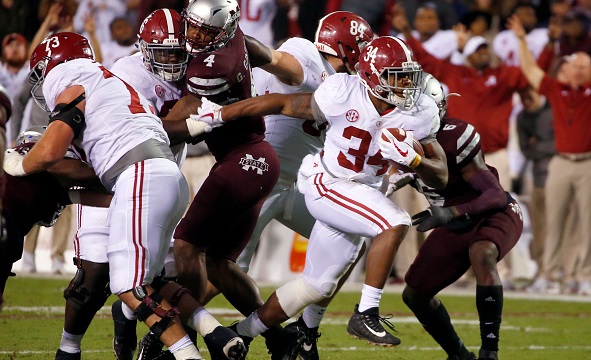 It wasn’t particularly pretty, but Alabama survived its trip to Mississippi State with a win, and now the Tide control the keys to the College Football Playoff. From a resume that looked pretty empty (but was great on the eye test) two weeks ago, Alabama now has wins over two ranked teams. That’s not enough most years, but with 2017’s chaos it might just be. If Alabama loses to Auburn in two weeks, are the Tide in the Playoff anyway?

There are still a lot of moving parts in the season, but Alabama is in a very enviable position. An 11-1 Alabama team would likely stay ahead of an 11-2 Ohio State team that wins the Big Ten. The Tide would certainly be ahead of the Pac-12 champion, no matter what. At 11-1, Alabama could easily slide ahead of a Clemson team that loses to South Carolina but wins the ACC. Alabama is in tremendous position right now, and every Playoff bubble team is just hoping that the Tide win out so that a two-bid SEC isn’t on the table.

A two-bid SEC once seemed like a possibility only if both Alabama and Georgia entered the SEC Championship Game at 12-0, but that changed this week. Losses by Washington and Notre Dame left a large gap behind Alabama. If Georgia wins the SEC title at 12-1, then an 11-1 (or 12-1) Alabama team is also likely to earn a spot.

The other major beneficiary of Week 11’s chaos is Oklahoma. The Sooners took control of the Big 12 race and are now just three wins away from a Playoff berth.

Last week, we had 15 teams remaining in contention. However, a few of those 15 (Oklahoma State, Michigan, and UCF) were hanging on by a thread. This week, all are still hanging on. In fact, I am only eliminating one team this week. The Michigan State Spartans, due to picking up their third loss, are out of the Playoff race. Everyone else who was alive last week is still alive this week, though Washington and Notre Dame are now in incredibly precarious positions.

Why USC is eliminated

USC has clinched the Pac-12 South, and is just awaiting its opponent in the Pac-12 Championship Game. I eliminated USC in Week 8, when the Trojans were blown out by Notre Dame. However, with the chaos that has occurred since then, it seems reasonable to ask if USC is actually eliminated. Well, unfortunately for Trojans fans, the answer is still yes.

USC currently has two ranked wins on the season, both of which are over two-loss teams. If both Stanford and Arizona end at 9-3, those will be two very good wins. Add in a win over Washington (or a second win over Stanford) in the Pac-12 Championship Game, and the resume doesn’t look too bad. Unfortunately for the Trojans, “not too bad” won’t be good enough.

Even at 11-2, USC will be behind a two-loss champion from every other Power 5 conference. Maybe things get close if TCU wins the Big 12 at 11-2, but the Horned Frogs would still have a better resume. It would be close in terms of wins, but the fact that the Trojans were absolutely embarrassed by Notre Dame will tip the scales. USC will be behind the Big Ten champion, whether it be 11-2 Ohio State or even 12-1 Wisconsin. The Trojans will obviously be behind the ACC and SEC champions, unless some absolute insanity happens. (Georgia losing to both Kentucky and Georgia Tech, but then upsetting Alabama is not a scenario I will entertain yet.)

USC is a solid team this season, and could even end as the committee’s No. 5 team. But the resume just isn’t there to crack the Top 4 unless absolute insanity happens. If Alabama loses to Mercer next week, I’ll un-eliminate the Trojans. But it’s not happening. If USC fans want a pipe dream, it’s this: Wisconsin loses to Michigan (reasonable), then loses to Minnesota (highly unlikely), then beats Ohio State for the Big Ten title. Like I said, it’s not happening — so USC stays eliminated.

Group of 5 bid all wrapped up

With this week’s results, the American Athletic Conference has essentially locked up a New Year’s Six bid. Even at 10-2, the UCF/USF winner would be better than any other Group of 5 team. Similarly, even if Memphis drops a game, the Tigers would have a better resume at 11-2 than any other champion could possibly have.

If Memphis loses its final two games, then Houston can win the AAC West. In that case, a 10-3 Houston would still have a better resume than all other Group of 5 teams — save perhaps an 11-2 San Diego State. Unfortunately for the Aztecs, they need Fresno State to lose its final two games just to have a chance at winning their division. An 11-2 Troy team would not have a resume as strong as Houston’s, but perhaps the win over LSU would give the Trojans enough to make it a debate.

Similarly, an 11-2 Boise State team wouldn’t have a resume as strong as Houston, but the one fewer loss and the Boise State brand could push it over the top. Either way, though, it won’t matter — because Memphis isn’t going to lose to ECU. That Group of 5 bid — likely a Peach Bowl berth — is going to the AAC.

With only two weeks left until conference championships begin, there are finally few enough games that we can map out the optimal scenario for each team that still has Playoff hopes. Later in the week, I will have a separate post mapping out all of these scenarios — what each team needs to root for to get to the Playoff. Every game involving a ranked team (and some unranked ones) matters to at least one contender, and we can finally point to each game and say how.