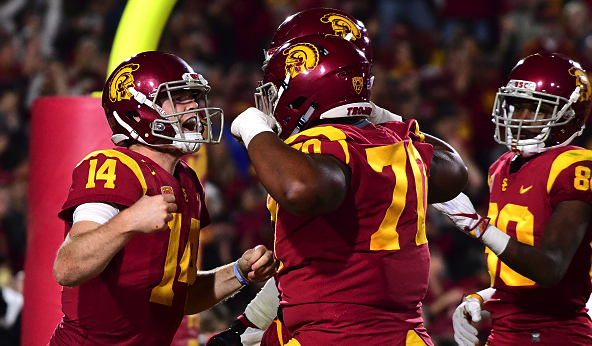 The second-to-last weekend in November has become, as Rece Davis so delicately put it while on the air Saturday night, the “SEC virtual bye week.” Because the SEC and ACC only play eight conference games, and because many play major rivalry games next weekend, many teams from those conferences opt to use this weekend to play a weak non-conference opponent. Five teams from these two conferences played FCS teams this week, while three more played lower-end Group of 5 schools.

What all of this meant, then, is that there were a grand total of five matchups between Power 5 teams with winning records. The weekend was not a total disappointment — there were certainly plenty of entertaining games — but not much changed in the Playoff picture. Miami got a bit of a scare, Notre Dame battled past Navy, Wisconsin made a statement, and Oklahoma State crashed out of the Playoff race for good.

Next weekend, though, will set up just about everything. Rivalry games all over the place have huge Playoff implications, in just about every conference. From the Iron Bowl to Stanford, games across the country and across the weekend will let us know who still has a chance when we play conference championship games.

USC’s Path to the Playoff

Last week, I explained why USC doesn’t have a shot at the Playoff. I still believe that is true, but both USC and Washington State currently have paths. The paths are pretty unrealistic, but they exist, so we’ll go through them.

First of all, Wisconsin has to lose this week against Minnesota. A 12-1 Wisconsin team would stay ahead of both USC and Washington State, even at 11-2. Unless the Badgers get destroyed by Ohio State in the Big Ten Championship Game, Wisconsin would just have a better resume at 12-1. This leads us to the second result, which is that Michigan has to beat Ohio State. The Pac-12 needs Ohio State to end up 10-3 and Wisconsin to be 11-2 to have a chance.

Next, the Pac-12 would need both the ACC and SEC to be one-bid leagues. For the SEC, that means Alabama winning out. An 11-1 Alabama team is probably ahead of both USC and Washington State at 11-2; a 12-1 Alabama team definitely is. In the ACC, that means either Miami winning the ACC Championship Game, or the Hurricanes losing to Pitt this week.

Lastly, though this is more an issue for USC than Washington State, Stanford needs to beat Notre Dame. A 10-2 Notre Dame team certainly gets in before USC (the Irish beat the Trojans by 35 points earlier this year), and probably stays ahead of 11-2 Washington State as well. Notre Dame needs a third loss if either of these teams is to have a chance.

There it is; this is the Pac-12’s path to the Playoff. It’s an incredibly unlikely path, which is why USC and Washington State are still eliminated, but it’s a path. If Notre Dame loses, Alabama beats Auburn, and the requisite Big Ten results occur next week, I will un-eliminate USC (and Washington State, if the Cougars win the Apple Cup against Washington). Until then, though, the Pac-12 has zero teams alive.

I’ve been saying this for a while now, but it’s still true, even with the committee putting Boise State at No. 25 this past week. The AAC has the New Year’s Six bid locked up.

The AAC Championship Game will be Memphis against the winner of this week’s game between UCF and USF. If Memphis loses to ECU (highly unlikely), there is a very small chance that Boise State could jump the Tigers. I think Memphis would jump the Broncos back with a win the following week, though, so the point is moot. It’s an AAC team playing in the New Year’s Six, regardless of what Boise State does.

Every game matters, except for this week’s Boise State-Fresno State game. The two are locked in to play each other again next week in the Mountain West Championship Game, and neither is playing for a New Year’s Six slot. This week will be a chance to warm up for the game and play for some pride, but other than a chance at being ranked at the end of the year, this game doesn’t mean much.

On Thanksgiving Day, Ole Miss and Mississippi State face off. Mississippi State winning this game is important for Alabama, which has a dearth of quality wins and could be in real trouble if it loses to Auburn.

On Saturday, Ohio State will try to keep its Playoff hopes alive in the Big House against Michigan. Washington State will visit Washington and a Cougars win will earn them a spot in the Pac-12 Championship Game. Memphis hosts ECU, and a Tigers win will further clinch the NY6 slot for the AAC.

The afternoon swings into form with the Iron Bowl, where the winner will go to the SEC Championship Game and a de facto Playoff quarterfinal against Georgia (unless the Bulldogs lose to Georgia Tech; an 11-2 Georgia team is not a Playoff lock). Wisconsin will try and finish its perfect regular season against Minnesota, and USC fans will be rooting hard for a Badgers loss. Oklahoma hosts West Virginia; a Sooners win will put them just one more win away from a near-certain Playoff bid.

In the evening, Clemson visits South Carolina. A Gamecocks win would be great for Georgia, while a Clemson win will guarantee the ACC a Playoff spot. And, lastly, Notre Dame visits Stanford. The Irish still have Playoff hopes, and it starts with beating Stanford, then USC winning the Pac 12 Championship Game (and a few more results, but we’ll discuss that another time). A Notre Dame loss, on the other hand, helps just about every other two-loss team.

We should be in for a great weekend, which will hopefully make up for the one we just went through.