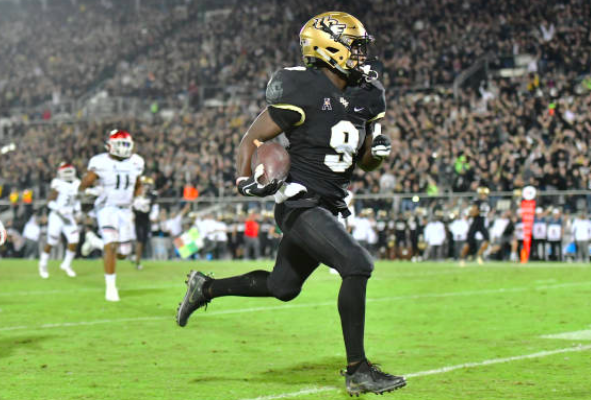 UCF has been on the fringe of the Playoff conversation all year. Well, now it’s time for the Knights to feature centrally.

Let’s start with this: The Knights do not yet control their own destiny. If Clemson, Notre Dame, and Michigan (or Ohio State) win out, UCF won’t be in. The SEC champion will be ahead of the Knights regardless. If Oklahoma wins out, the Sooners will be ahead of UCF. Washington State is likely ahead of UCF with two more wins, although that can be debated. But that’s it.

We have never, in the College Football Playoff era, been able to say that before. Sure, we’ve had undefeated Group of 5 teams, but the committee is clearly grading this year’s UCF team on a curve. The resume doesn’t warrant the ranking, but the committee is giving it anyway. It also helps that there are no “second-tier” P5 teams. There are currently two–just lonely West Virginia and LSU–P5 teams with exactly two losses. The eight ahead of UCF in the pecking order have one or zero. And there are still two weeks left to play.

What does UCF need to get in? We’ll know more on Tuesday night, but I fully expect the Knights to jump LSU this week. They might also jump Ohio State due to the Buckeyes’ consistently disappointing wins, but the Buckeyes would jump them back with a win over Michigan next week anyway, so that’s irrelevant. If UCF is stuck behind LSU then the path to the Playoff is much more difficult. Everything the committee has done this year, though, shows that UCF will get the benefit of the doubt. Assuming Alabama is the No.1 seed, I cannot imagine the committee putting the Tide against a team that they already beat 29-0.

That leaves UCF with a real path to the Playoff. I’m going to lay out that path below, but first, let’s update our Eliminator.

We entered this week with 11 teams still alive. Syracuse is the only elimination this week, and we are down to our final ten contenders.

UCF’s Path to the Playoff

All right, let’s deal with the nitty-gritty here. UCF needs just one Playoff spot to open up. Currently, there are six groups ahead of UCF in line.

That’s the list. All UCF needs is for three of those groups to fall out of line. Washington State has two tough games remaining–the Apple Cup against Washington, and the Pac 12 Championship Game against Utah (if the Cougars beat Washington). Oklahoma has to beat West Virginia twice if it wants to go 11-1. And whoever wins this week’s game between Ohio State and Michigan will face Northwestern the following week. It is not inconceivable for all three of those groups to break UCF’s way.

If not, there is still some other potential. Clemson will play Pitt in the ACC Championship Game. UCF already beat Pitt earlier this season. If Clemson loses to Pitt then wins the CFP, UCF will probably–again–claim a National Championship. That would be embarrassing for the CFP, but probably not enough to drop a 12-1 Clemson team behind UCF. Similarly, if Notre Dame loses to USC this week things get interesting. You would usually expect an 11-1 Notre Dame team to be ahead of an undefeated Group of 5 team. However, losing to USC would be so ugly at this point that it alone could cost the Irish a Playoff spot.

There is also another possibility. Ohio State and Oklahoma have both been winning in such an ugly fashion that UCF–if it dominates its final two games like it did against Cincinnati–may jump both of those teams anyway. That would be far less likely, but if Ohio State gives up 50 points to Northwestern and still wins, don’t be shocked if 12-1 Ohio State gets bumped in favor of the Knights.

The one thing that could entirely derail UCF would be Georgia upsetting Alabama in the SEC Championship Game. Assuming Alabama doesn’t also lose to Auburn this week, a 12-1 Tide team would almost certainly stay ahead of UCF. Similarly, an 11-2 Georgia team could stay ahead of UCF if it keeps it close against Alabama. UCF would feel far more comfortable about its chances if Georgia or Alabama (or both, unlikely as that is) loses this week.

As mentioned above, we’re already out of two-loss P5 teams. We also only have eight three-loss teams remaining. Some of those–Syracuse and N.C. State, for example–are probably well outside the NY6 picture. Kentucky, also, is not an ideal choice for an at-large bid after the loss to Tennessee. So who is still in the potential pool for the three at-large spots. (There are technically four at-large spots, though one is reserved for a Group of 5 champion. If UCF were to make the Playoff, then there would be four spots available.)

LSU looks to be a New Years’ Six lock, whether or not the Tigers beat Texas A&M this week. Behind the Tigers, Penn State and Florida look to be in the best positions if they win this coming week. Texas is also in the mix, and may jump both of those teams this week. That’s the entirety of the current pool, though. Unless all three of those teams lose this week, don’t expect many surprises.

The problem for these teams are the teams ahead of them, though. For example, Washington State will almost certainly get an at-large if it doesn’t win the Pac 12. So a Cougars loss in one of the next two weeks will take away an at-large spot from a team behind them. Similarly, if Northwestern can win the Big Ten Championship Game, expect at-larges for both Ohio State and Michigan. (Though if the Buckeyes get blown out in their loss–whoever it comes to–their at-large hopes may go out the window as well.) If West Virginia beats Oklahoma, the Sooners will get an at-large spot. And if all of these happen (and if Texas beats West Virginia in the Big 12 CCG), then expect some very deserving teams to be playing in second-tier bowl games this year.

It’s Thanksgiving week. We get a fun Egg Bowl to start on Thursday night–which could have some impact on the final Top 25–and then it’s an extended weekend of college football. Texas travels to Kansas at noon on Friday to keep its Big 12 Championship hopes alive. If Texas wins and West Virginia beats Oklahoma, then the Longhorns will face the Mountaineers in the Big 12 Championship Game. At the same time, Houston will battle Memphis for the AAC East crown (well, tiebreakers could get complicated if Memphis wins). After that, UCF tries to keep its undefeated season alive against a flailing South Florida team.

Friday night, we get two important games. Oklahoma travels to West Virginia for a game that will affect the CFP, NY6, and Big 12 races. Also, the Apple Cup (at the same time) will determine the Pac 12 North winner and whether the Pac 12 will stay alive in the race for a Playoff spot.

On Saturday, we get meaningful and rivalry (and sometimes meaningful rivalry) games galore. Ohio State vs Michigan will determine the Big Ten East champion and is a CFP elimination game. Georgia will try to keep its Playoff hopes strong against Georgia Tech. And Florida will try to keep its NY6 hopes alive, and end Florida State’s bowl streak in the process. Purdue and Indiana will battle for a bowl berth, as will Tennessee and Vanderbilt a little later.

In the afternoon, we get the Iron Bowl. The game might not end up mattering if Alabama beats Georgia, but an Alabama loss in this game would almost certainly end any chances of a two-bid SEC this year. Penn State will try to stay alive for an NY6 spot when it hosts Maryland, while Troy and Appalachian State will duel for the Sun Belt East crown.

At night, Notre Dame will try to lock up a Playoff spot when it visits USC. To cap off the weekend, Boise State hosts Utah State for the Mountain West Mountain Division title. If UCF loses in the AAC final, that game may very well determine who gets the Group of 5 NY6 at-large bid.