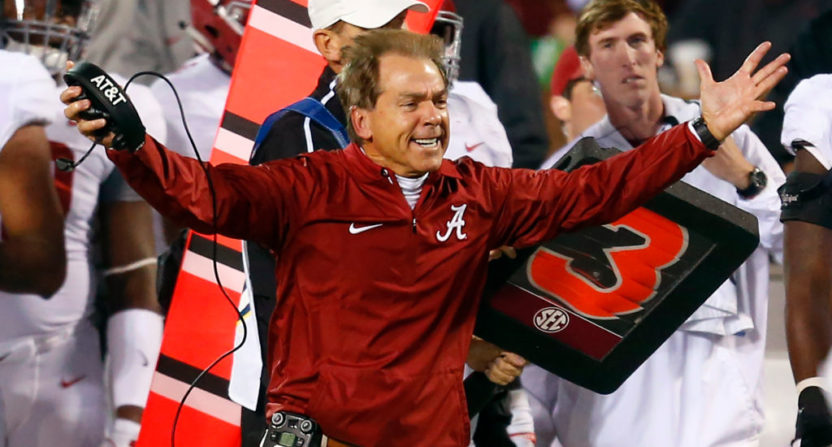 For the first time since we entered the selection committee era of college football, the midseason rankings matter. I mean, they still don’t really matter — the committee can always just change their mind next week — but this week will require careful thought and evaluation. Miami’s loss doesn’t matter so much to the committee. No matter where they put the Hurricanes, we all know that Miami is in with a win over Clemson.

No, all the focus has to be on Alabama.

Last year, we had a slightly similar situation. Ohio State was clearly one of the country’s superior teams, and had one of the best resumes. The Buckeyes did not win the Big Ten. The cases are actually not analogous at all — as I will explain in detail below — but people will draw the comparison. Still, the committee showed us their thoughts last year with Ohio State, never moving the Buckeyes below No. 2, until they were jumped by Clemson in the final rankings.

This year is a different story. The question is whether Alabama will stay ahead of a two-loss Power 5 conference champion, most notably Ohio State, after next weekend. Where the committee puts Alabama this weekend will shed a lot of light on that. If the Tide only fall a few spots, that means the committee still thinks Alabama is one of the top teams, and it would be unlikely for Ohio State to jump the Tide with a win next week– and if Alabama stays ahead of Wisconsin, it would be all but impossible.

If, however, Alabama falls to No. 6 or 7 — one or two spots ahead of Ohio State — that would be a clear sign that a Buckeyes win would probably leap them over Alabama. But either way, the committee won’t be able to duck questions about it. Kirby Hocutt will have to defend the committee’s ranking of Alabama — whatever it is — and that will teach us a lot about this committee.

We entered this week with 11 teams in Playoff contention. I had said that I would un-eliminate USC (and Washington State) if Alabama won and both Ohio State and Notre Dame lost. One of those three happened, so the Pac 12 now officially has no path to the Playoff, not even a pipe dream one.

With their loss to Stanford, the Notre Dame Fighting Irish are now eliminated from the Playoff. At two losses, they had a real case– they have a strong collection of wins and a consensus top SOS. But with this third loss, that all becomes irrelevant. Additionally, we did not see enough chaos this season for UCF to have a chance to sneak in to the Playoff. I am always loath to eliminate undefeated teams, but UCF no longer has any path.

As I mentioned above, people are constantly comparing the situations of Alabama this year and Ohio State last year. After all, last year the Buckeyes made the Playoff with only one loss, even though they weren’t a conference champion. Wouldn’t it be poetic justice if a one-loss Alabama kept Ohio State out, even though the Buckeyes would be a two-loss conference champion?

The problem is, the situations are not the same at all. I’m going to post the resumes side-by-side to prove it.

If there has been one thing clear in the Playoff era, it’s that who you beat matters more than who you lose to. Ohio State earned its way into the Playoff last year because of who they beat. The Buckeyes had three Top 10 wins last year (Oklahoma, Michigan, and Wisconsin). Alabama this year has none. Their best win is LSU, who will probably be a Top 15 team this week. After that, it’s Mississippi State. After that, it’s… 7-5 Texas A&M?

Last year’s Ohio State team had three wins better than this year’s Alabama team. Ohio State had five wins (can’t forget 9-3 Tulsa, certainly a better win than any nonconference win Alabama has this year) better than Alabama’s third-best win last year. Also, note the strength of schedule numbers. Now, those numbers are not yet taking into account the Auburn game, so Alabama’s SOS will probably end up in the 30-50 range.

These resumes are not comparable in the slightest. The only team to make the Playoff that didn’t win its conference is last year’s Ohio State team. That team had an incredible resume — stellar SOS, three Top 10 wins, good additional wins — not to mention the fact that the loss came on a blocked field goal in a bad weather game. Alabama has absolutely none of that going for it this year.

The Tide might absolutely still get in the Playoff. FiveThirtyEight has it as essentially a toss-up between Alabama and Ohio State if the Buckeyes win next week. But don’t compare this year’s Alabama team to last year’s Ohio State team; the resumes just aren’t close.

Group of 5 Race over

I’ve mentioned it the past few weeks, but a little repetition never hurt anyone. The AAC champion is going to play in a New Year’s Six bowl. Who it will be against and which bowl is very up in the air right now. But the winner of the rematch between Memphis and UCF will be playing in a major bowl; that much is guaranteed.

We are on the absolute brink of chaos this year. It’s actually a chaos that the committee has never had to contend with in its first three years. People talked a lot about the controversy of Ohio State last year, but just look at that resume above. That resume will be a Playoff lock every year; there was no controversy there.

This year, though, if Ohio State beats Wisconsin, the committee will have a tough decision to make. Ohio State will absolutely have better wins, but the Buckeyes will also have better losses. Alabama passed the eye test pretty well, but hasn’t looked great in its last few real games (I’m not counting Mercer). Will the committee remember that the Tide barely survived against Mississippi State and hold that against them? I have no idea.

What the committee wants to see, therefore, is the one scenario where no one will argue about who gets in. If Wisconsin and Oklahoma win next week, the Playoff is an easy lock. The ACC champion is in, the SEC champion is in, Wisconsin is in, and Oklahoma is in. The committee can have a tough time debating the seeding there — just about any order is defensible — but that is far less stressful than picking the proper team.

The 13-member committee will watch games in Grapevine, Texas this coming weekend. You can absolutely bet that they’ll be rooting hard for Wisconsin and Oklahoma. A TCU win creates a tough decision about that fourth team, but putting Alabama in isn’t an awful option for them. But if Ohio State wins, then the committee has to think long and hard about the decision– and how they’re going to defend it.

These go without saying. Every game matters. Even the mostly-meaningless rescheduled Florida State/Louisiana-Monroe game will determine whether the Seminoles go bowling. But that’s not a game anyone outside of Tallahassee (and maybe Vegas) will be interested in.

So, as we look forward to the games, I will leave everyone with one staggering stat. Seven of the nine conference championship games this year will be regular-season rematches. The only conferences to not feature a rematch are the ACC and the Big Ten. That’s unprecedented, and incredibly unlikely. Hopefully it will make for some fun football next weekend, not that a weekend made up entirely of do-or-die games needs anything extra.