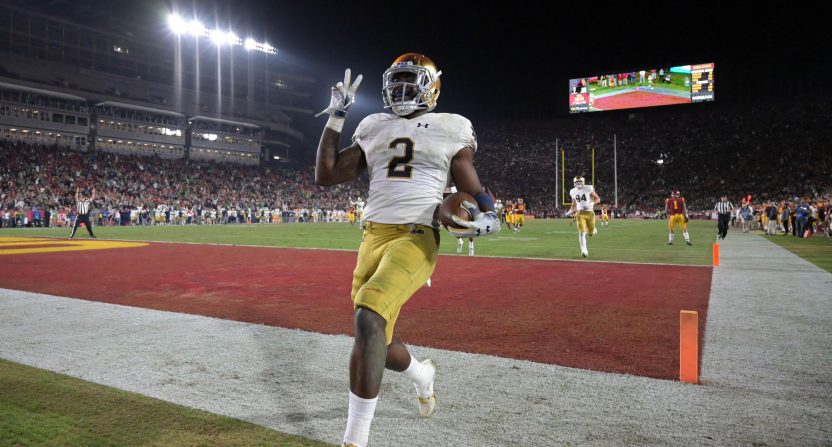 There is just one week left in this year’s college football season. On week, one slate of games, and six teams fighting for the final three Playoff spots. Notre Dame is in. Clemson and Alabama are heavily favored to join the Fighting Irish. Will we see Oklahoma and Ohio State win and fight it out for that last spot? Or could we see some chaos? There are five basic scenarios that can occur, and almost all of them present a rough decision for the selection committee. We’ll map these scenarios out, in full, after looking at our Eliminator.

We entered this week with ten teams still alive. After eliminating Washington State, West Virginia, and Michigan, we are down to our final seven. Additionally, Notre Dame has locked up a Playoff spot. The Irish will play in one of the semifinal games, so we are down to six teams competing for the final three spots.

Alabama wins, Clemson wins, and only one of Ohio State/Oklahoma win.

This scenario is easy because it provides an obvious top four. The four Playoff teams would be Alabama, Clemson, Notre Dame, and whichever one of Ohio State or Oklahoma won.

What to do here? Ohio State has the better top-end wins, but Oklahoma has more good wins. Oklahoma has, by far, the better loss. Ohio State has been inconsistent for most of the last month, but Oklahoma’s defense is just atrocious. There’s no right choice here, but there’s not really a wrong choice either. (And, honestly–just because of the defenses–jumping UCF over both wouldn’t really be a wrong choice either.)

What happens if Alabama loses? It really will depend on how the rest of the games play out. This is the toughest choice for the committee, though. Alabama’s dominance means that the Tide have earned plenty of benefit of the doubt. Clemson, Georgia, and Notre Dame are in in this case. If both of Oklahoma and Ohio State lose, Alabama definitely stays in. If only one of those two (or neither) lose, then the committee will have to make the same decision as in Scenario 2, but it will have to decide if Alabama is better than both of those teams, as well.

This will be really tough for the Tigers. Like above, it depends on what else happens. Alabama and Notre Dame would be in. If Ohio State or Oklahoma loses, Clemson probably stays in. The one thing that would muddy this up for Clemson is UCF. The Knights already beat Pitt–quite handily–this year. Would UCF jump the Tigers? Probably not, but that does risk giving UCF an obvious opening to claim a national title, just like last year.

As of last week, UCF had a real path to the Playoff. Now, with Mackenzie Milton’s injury, it’s hard to know how the committee will treat UCF. The voters will get to see his replacement. Maybe Darriel Mack will go full Cardale Jones and impress the committee, but it’s impossible to know what happens with UCF now. However, if Alabama, Northwestern, and Texas all win on Saturday–assuming UCF looks close to as potent as it did with Milton–then it will be hard to keep the Knights out.

There are plenty of other possible permutations, obviously. What if Alabama and Clemson both lose? Or what if we see every contender remaining alive lose? Things can always go crazy and shake everything up, but that’s rare and unreasonable to expect. (If every team still alive loses, though, the Playoff teams would be Notre Dame, Georgia, Alabama, and Clemson.) The above five are the scenarios that are at least somewhat likely–using the word “likely” loosely, considering Clemson opened as a 24-point favorite.

At this point, only three teams can earn the Group of 5 at-large bid. If UCF wins, that bid goes to the Knights–likely in a New Years’ Six Bowl, possibly in a CFP semifinal. If Memphis upsets UCF, then the Boise State-Fresno State winner will get the Group of 5 bid. Those are the only options left. Buffalo and Appalachian State had had great seasons, but it won’t be enough for a major bowl bid.

There are a ton of possibilities for the NY6 at-larges, so it’s really impossible to map them all out. Right now, Michigan looks to be in good position–assuming Ohio State doesn’t make the Playoff. If the Buckeyes do make the Playoff, then the Wolverines will go to the Rose Bowl and be out of the at-large pool. Ohio State and Oklahoma will get at-larges if they lose this week, but will clinch Playoff or Rose/Sugar Bowl berths with a win. When it comes to the at-larges, Florida and LSU look in decent position, but we’ll know more when we see the committee’s rankings on Tuesday night. Penn State and Washington State are two more to watch out for. It would be very surprising if our pool of at-larges included anyone but those four, or teams in front of them this week.