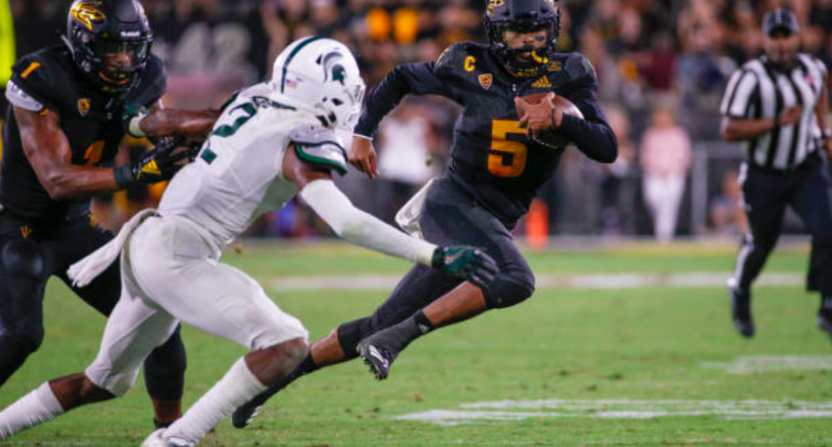 Looking ahead to the Week 2 slate, most realized that we’d be treated to a relatively light lineup this week. To our disappointment, those expectations mostly came true.

To be sure, there was plenty of excitement. Clemson barely held off Texas A&M. Indiana and Virginia played a nail-biter. Florida State almost lost to Samford. Colorado State pulled off an amazing comeback over Arkansas. College football will never disappoint. It just sometimes does better than this week.

With few major noteworthy events, not much happened in the grand scheme of things. Most of the contenders stayed pat, and few of the weaker Power 5 teams picked up bad losses that could matter later. Even Kansas won — handily — against Central Michigan.

Some of the trends we pointed to last week should be revisited, though. Penn State looks like it solved its early issues, especially on defense. Michigan State, not so much. The Spartans lost to Arizona State, a much-needed prestige boost for the Pac 12. If only that win didn’t come well after 2 AM Eastern.

Upsets will happen; teams will rise and teams will fall. Separation will happen eventually. It always does. We just didn’t see any this week, aside from Michigan State and Florida State firmly entrenching themselves outside the contenders list. And even then, neither team has done anything that will keep it out of the Playoff if the issues get fixed very quickly.

Group of 5 race heating up

As it always seems to, the early leaders in the race for the Group of 5 bid to the New Year’s Six is between Boise State and the AAC. UCF looks solid, though it didn’t blow out an FCS team by as much as you’d expect. South Florida and Houston picked up good wins for the conference, though Memphis losing to Navy hurt a bit.

Boise State, meanwhile, blew the doors off UConn early. A little surprisingly, the Broncos pulled back a bit in the second half. The committee does take common opponents into account if teams are close, and UCF already blew out UConn in Week 1. The Broncos put down a statement that anything UCF can do to UConn, Boise State can do just as well.

Also, keep an eye on Hawai’i. The Rainbow Warriors are already 3-0 and look to have a devastating offense, led by QB Cole McDonald. Hawai’i and Boise State don’t face each other in the regular season, so we could be heading into a showdown with a New Years’ Six Bowl berth on the line come conference championship weekend.

The MAC looks stronger this year than it has been in a long while, but we have to wait until some separation starts to form before we can judge who the contenders will be.

Thankfully, Week 3 is loaded with games that will alter the season’s landscape. And it starts early on.

Oklahoma looks to avenge last year’s loss to Iowa State, this time on the road. Iowa State just lost to Iowa, so a repeat upset will be big for Iowa- and by extension Wisconsin, who may need its schedule to look stronger.

Miami (Fl) travels to Toledo in a potential tough game against a good team. A win for Toledo would be huge for the MAC in its attempt to catch the AAC and MWC, and another Miami nonconference loss would take a quality win away from much of the ACC. The same could be true of Ohio’s trip to Virginia, though the Bobcats looked well below their usual level in their opening game.

Vanderbilt travels to Notre Dame, and we’ll find out just how good Vanderbilt is this year. Did the Commodores look solid these first two weeks because they are, or because they faced weak opponents? Was Notre Dame’s struggle against Ball State a fluke? Or do the Irish have some serious offensive woes?

LSU and Auburn face off in a major SEC West matchup, though since each has a big nonconference win already, the game doesn’t shift the CFP calculus much. Washington and Pac-12 fans want to see Auburn win; Miami (Fl) and ACC fans want to see LSU win.

West Virginia travels to N.C. State. The Mountaineers looked great in Week 1, and another Power 5 nonconference win will suddenly make them look like Playoff contenders. On the other hand, a Wolfpack win will help the profile of the ACC Alantic Division, which could definitely use a boost right now.

The big game of the afternoon, though, is Boise State at Oklahoma State. Both the Broncos and Cowboys will get a chance to show if they’re real contenders this year. A good Boise win would probably put the Broncos ahead — for now — in terms of going for that NY6 slot. An Oklahoma State win will mean that voters will start to take the Cowboys seriously and stop treating this as a rebuilding year.

The evening is headlined by Ohio State vs TCU (of which the implications are obvious), but keep an eye on the other games being played then. There are a bunch of matchups between middle-of-the-road Power 5 teams and decent Group of 5 teams. Upsets in those games — like we saw with Colorado State over Arkansas or Houston over Arizona this week — will lower the profile of in-conference wins over those P5 teams, so keep an eye out for them.

And, of course, there’s also USC vs Texas, which has lost a lot of luster in the past two weeks. Still, a Texas win will hurt the entire Pac-12, as that conference is rapidly running out of unblemished teams.