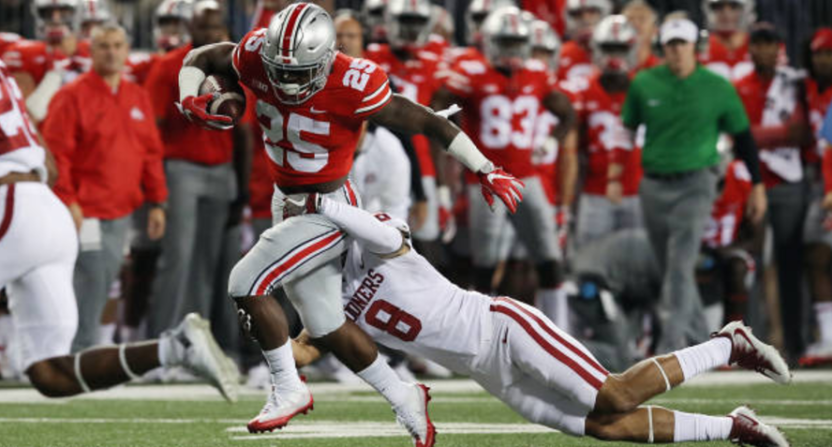 There are a lot of big stories coming out of college football this weekend. None, perhaps, are bigger than Ohio State’s loss to Oklahoma. The Buckeyes did not look like a top two team — on either side of the ball — against Oklahoma and will need some serious fixes if they want to stay in the College Football Playoff mix.

How bad is Ohio State’s current Playoff situation? Not as bad as some might think. There is no more margin of error, though, unless we get extreme chaos (2007-level) later this year. Still, a 12-1 record with wins over Michigan, Penn State, the Big Ten West champion, and two solid cross-divisional games (Nebraska and Iowa) should get Ohio State into good Playoff contention. Buckeyes fans will be forced to root for losses to crop up in other conferences, but those usually happen anyway. The odds of an undefeated champion coming from four power conferences are incredibly low, and Ohio State should get in over any one-loss team except for Alabama.

Ohio State’s season isn’t over, just like after their loss to Penn State last year. The only difference is that last year, the Buckeyes built up much of their gap over the field before the defeat. This year, that gap is gone so Ohio State is playing from behind. The Buckeyes aren’t done yet, but they will need help. Then again, if the team doesn’t improve from what it showed Saturday night, this whole conversation is academic anyway.

On the other side, Oklahoma pulled a huge win in its cap for both itself and the Big 12. Last year, the Big 12 was in big trouble after just a few weeks. This year, Texas picked up a loss, but between Oklahoma, Oklahoma State, TCU, and Kansas State, the conference is building the potential for late-season quality wins and having real Playoff contenders in November.

Eliminations are still coming in fast as Group of 5 teams that pick up losses get ticked off the list. We should start to see the real P5 eliminations trickle in starting next week. A few were considered this week (Rutgers, Oregon State, and Kansas, I’m looking at you), but there is no rush to eliminate teams. Teams will be eliminated when they lose, not because the odds of them winning future games are very low.

How and when a team is eliminated depends on a lot of things, but mostly each individual team’s schedule. I look at a team and say, “If this team wins out, can it make the Playoff with a moderate amount of chaos?” If the answer to that question is yes, then I don’t eliminate a team.

For example, Oregon State isn’t eliminated yet, because the Beavers still play Washington, USC, and Stanford, among a few other quality teams. An 11-2 Oregon State team with those wins would probably get in the Playoff with a decent — but not extreme — amount of chaos around the country. I don’t predict the games when counting eliminations. The premise is always based on a team’s chances if it wins out, regardless of the odds of winning out. If the teams don’t win out, the eliminations will come.

I also have not yet eliminated Colorado State. If the premise is that a team wins out, that would include a win over Alabama for the Rams. A 12-1 record with a win over Alabama could get a Group of 5 team into the Playoff, especially with a decent schedule like Colorado State has. Similarly, Boise State and Wyoming haven’t been eliminated yet, because they will each play Colorado State. A win over a team that beat Alabama would also be a huge resume boost. Since their eliminations hinge on just one result–even an incredibly unlikely one — I have no reason to eliminate these teams now. When Colorado State loses to Alabama next week, all three will be eliminated, even if Boise State and Wyoming win their next games.

When judging conferences in nonconference play, there are two major factors to look at. The first is how the games are perceived by the general college football media. Big wins mean big boosts for conferences. For example, Oklahoma’s win over Ohio State will get much more air time and discussion than Baylor’s two losses will. When it comes to national perception, those two factors balance out in the Big 12’s favor.

However, an important second factor to consider is the number of losses that each conference picks up. At the end of the day, losses — or, more precisely-lack thereof — still rule the day in college football. Losses mean lower rankings. Wins over teams with more losses are less valuable. Losses to teams with more losses hurt more. The most valuable stat in college football is still that number in the “L” column.

At this time last year, the Big 12 had lost eight nonconference games. (And remember, the Big 12 is the smallest P5 conference.) This year, fewer games have been played, and no conference has lost more than seven (the ACC). This parity among the P5 conferences, with fewer losses to Group of 5 teams, could become meaningful later in the years in numerous ways.

So far this year, eight P5 teams have lost to Group of 5 (or FCS) teams. Last year, P5 teams lost that many in Week 1 alone — plus another six such losses in Week 2. We will have to wait to see just how this stat plays out, but to start with, fewer bad losses by P5 teams means fewer damaging losses to be had in conference play.

Additionally, when you consider that three of those eight losses this year were conceded by Rutgers, Kansas, and Oregon State — teams not expected to win many, if any, games in conference — then we can really see that the P5 conferences are not doing anything to hurt themselves this year so far. Among other things, that makes the resumes of two-loss champions look much stronger come December. It’s something to keep an eye on.

Boise State missed a golden opportunity to take firm control of the Group of 5 situation when the Broncos blew a 21-point lead in about six minutes against Washington State.

Now, there really is no frontrunner. USF is talented but has underperformed so far — and the canceled game against UConn cost the Bulls an opportunity to showcase their offensive prowess. The AAC has several quality teams, and not many losses so far, so it is the conference to watch, along with the Mountain West. The Mountain West gets two shots at huge upsets this coming week, when Colorado State visits Alabama and San Diego State hosts Stanford.

Neither upset is close to likely, but these are two of the MWC’s most talented teams. Good performances in both (or even one) of these games will raise the conference’s profile in the eyes of the CFB world and the selection committee.

Conference USA took a major hit this past week, when its two best teams lost to Power 5 teams and did not look at good while doing so. Louisiana Tech was steamrolled by Mississippi State in a game that — I kid you not — included a Louisiana Tech 3rd and goal from its own seven-yard-line. Meanwhile, Western Kentucky lost to Illinois. Conference USA is effectively out of this race for now, as is the Sun Belt. The MAC West has three solid-looking 2-0 teams. Keep an eye on that division if the MAC is going to repeat as the New Years’ Six representative from the Group of 5.

What games am I looking forward to for next week that aren’t on top of the CFB calendar? First of all (assuming the game is played), I want to see what Illinois can do against USF. The Illini already basically ended Western Kentucky’s New Year’s Six dreams. Can they do the same to USF and to Quinton Flowers’ nascent Heisman campaign? I’m keeping an eye on the MAC West, as Toledo hosts Tulsa and Central Michigan visits Syracuse.

Of course, I’m also watching the big games like Clemson vs Louisville. The loser will be far from eliminated, but it will establish a clear ACC pecking order while Florida State is assumed out of the conversation for the time being. I want to see if either Kansas State or Vanderbilt is actually a contender. A Kansas State loss would hurt the Big 12, though the conference is in much stronger standing after Oklahoma’s big win. Still, if both Kansas State and Oklahoma State (against Pitt) lose this coming weekend, it might be another undefeated or bust situation for the conference champion, especially if that champion isn’t Oklahoma.

Meanwhile, Week 2 ended badly out west for the Pac 12, though not as bad as it could have been. Arizona State and Arizona both lost to Group of 5 schools, while Oregon State got thumped by Minnesota (the game was actually close for a while, so the final score is a bit deceiving). With games like Stanford at San Diego State, Texas at USC, Ole Miss at Cal, and Oregon at Wyoming, the conference cannot afford another bad late night. Losing even two of these games, especially the USC one, could be very detrimental to the conference moving forward this season.