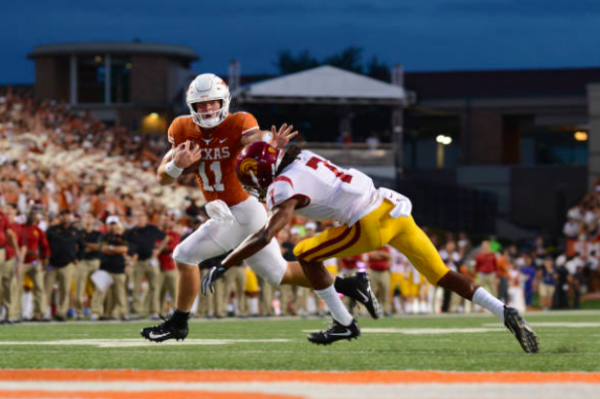 Towards the middle and end of the 2016 season, I spent a bit of time in this space talking about how there was no real second tier of contenders. The top teams in the country built such a huge lead on the entire field that they could all basically suffer a loss and stay in the top four. And that’s what happened. Clemson, Ohio State, and Washington all lost in the second half of the season, and all made the Playoff anyway.

It’s not a guarantee (almost nothing in this sport is), but we’re well on the way to that happening again this year.

There’s plenty of time for new teams to step up, and I’m sure there will be November contenders that no one expected. But among the expected contenders, so many have already fallen back. Wisconsin, Michigan, Michigan State, Miami, Washington, and more potential Playoff teams have already dropped at least one game. If these teams turn things around, that just means more wiggle room for the likes of Alabama, Georgia, Clemson, Ohio State, and Oklahoma.

A lot can still happen. The favorites can start dropping games. Teams like Oklahoma State, LSU, or Colorado can put in one-loss seasons that take away the wiggle room for the current top contenders. But as of right now, the list of serious contenders without a loss is small. And if that keeps up, that list will be able to afford a late loss- just like we saw in 2016.

We started this week with 81 teams still remaining, and 12 more eliminations now puts us at 69, with several more teams all but done. Expect to see the Power 5 eliminations heating up in the coming weeks, especially in the Pac 12.

Don’t look now, but the conference as a whole is hanging on by a thread. That is, if the teams expected to do well actually do do well. USC’s loss to Texas hurts. Arizona State’s loss to San Diego State hurts. Washington’s Week 1 loss to Auburn looks worse now. Oregon State just fell to Nevada. UCLA just finished off a winless non-conference slate. That’s a lot of non-conference losses for a conference that can’t afford so many.

There’s still plenty of upside for the conference, though. Four teams in the North are still undefeated. Colorado potentially looks impressive. Cal’s win over BYU suddenly looks much stronger. And Arizona State still has a quality non-conference win, even if it also picked up a tough loss. Don’t forget that USC and Stanford each have a shot against Notre Dame, too.

Here’s the problem, though: The Pac-12 can’t afford a two-loss conference champion. It will be incredibly difficult — if not outright impossible — for a two-loss Pac 12 team to make the Playoff, especially given what we’ve seen this season so far. That means that Washington has to be perfect. The conference also can’t afford for USC to beat any contender. Or for UCLA, Arizona, or Oregon State to beat anyone, really. The number of potentially-ranked Pac-12 teams is rapidly dwindling, and Playoff contenders need ranked wins. The Pac-12 still has plenty of paths to the Playoff, but most of them are sitting on a razor’s edge right now.

Group of 5 a battle between AAC and Mountain West

As expected, the only two conferences with a significant number of good wins are the Mountain West and the AAC. The Mountain West contenders have taken far more losses (that’s why the entire conference is eliminated already), but they also have better wins. If UCF and USF can keep that loss column at 0 until they meet, everything else will be moot. If not, though, comparing the resumes of the likes of Fresno State, San Diego State, Boise State, UCF, USF, and Houston will be both fascinating and incredibly difficult.

There are also a few others to keep an eye on. Akron and Buffalo have some decent wins in the MAC, though the eye test says they’re far from the caliber of competing in an New Years’ Six bowl. And North Texas suddenly — quite out of nowhere, starting last season — looks like a Group of 5 powerhouse. Don’t let the viral punt return highlight distract you from how absolutely dominant the Mean Green was against Arkansas.

Bad week for the Big Ten

I discussed the damage a bit already — especially to Maryland — but in the long run this conference still has a good shot at the Playoff. As long as the winner of Ohio State vs Penn State ends the season with one loss, that team will almost certainly be a lock. Any other contender that runs the table will be a lock as well. Week 3 was embarrassing for the conference and will hurt its overall strength this year, but in terms of getting a team in the Playoff it won’t hurt too much.

We should see some real separation in Week 4, and we’ll learn who’s ready to step up to fill the gaps left by our lack of “second tier” contenders. It starts on Friday night, when USC hosts Washington State. A Cougars win will give the Pac 12 a much-needed additional contender. A USC win will knock another Pac-12 team out of second tier position. Also on Friday night, UCF and FAU will play in a potentially pivotal Group of 5 game.

Georgia and Missouri play early Saturday as the Tigers try to show that the SEC East isn’t a one-team show. Kentucky will try to show the same when it hosts Mississippi State. In fact, just about every SEC game this week could have some impact on potential Playoff race position. That’s how many of the conference’s teams are still potential contenders at this point.

Minnesota at Maryland could have been a matchup of potential second (or third, really) tier contenders for the Big Ten. With Maryland’s embarrassing loss to Temple, though, this game has little meaning.

In the afternoon, TCU against Texas is a pivotal Big 12 battle. Both teams have important showings in the non-conference, and each team’s results moving forward will have a real impact on the conference. Texas has a huge win but a bad loss, while TCU showed very well against a likely Playoff team. Neither of these teams has much margin for error (though TCU has more than Texas), but this game will matter to the conference down the line.

At night, Stanford travels to Oregon for a major Pac-12 matchup. The conference can’t know which team it wants to win this game yet- that will entirely depend on how Stanford does against Notre Dame the following week. The Cardinal have a real chance to be the Pac 12’s standard-bearer, but it also has the chance to bring the conference down if it does too well in conference play but also loses two games overall. A similar case is true when Arizona State faces Washington. The winner of that game will be a Playoff lock if it wins out- but will come close to torpedoing the conference’s Playoff hopes if it loses another game later on.