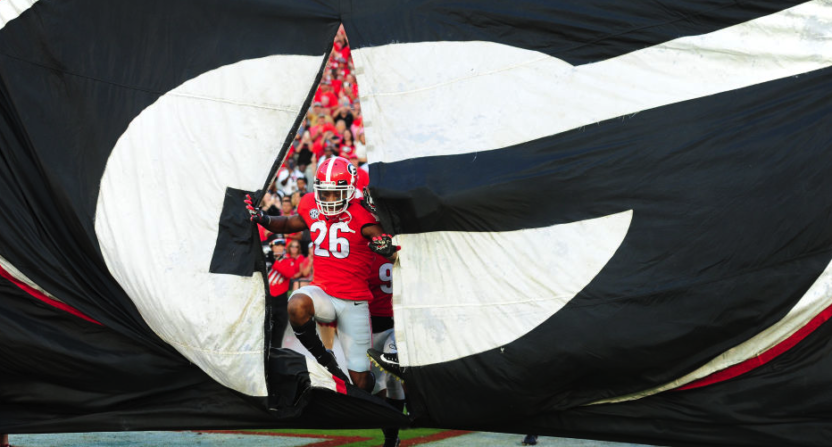 In a way, 2016 was an odd season in terms of the College Football Playoff race. The teams that started the year in the Playoff picture built up huge leads and stayed on top of the national conversation. Clemson, Alabama, and Ohio State were all expected to be there at the beginning of the year, and no one really came out of nowhere to shock us. Most people had Washington on their radars before the season. Louisville was a revelation, and Penn State slowly snuck up on everybody–as did USC after a 1-3 start.

But we never had a week last year where two teams came out of nowhere and announced themselves in the national picture.

As of Week 4 of 2017, this year is different. TCU came out of nowhere and absolutely thrashed Oklahoma State. Many considered the Cowboys a serious Playoff threat before this week, but not anymore. Oklahoma State’s huge passing attack was shut down by a secondary that struggled against SMU last week. (Speaking of SMU, the Mustangs look really good, both in retrospect and in their domination of Arkansas State this week.)

Georgia also shot themselves into the conversation with a dominant victory over Mississippi State. Maybe we slightly overrated Dan Mullen’s Bulldogs due to people respecting LSU more than was warranted, but the point stands that this was a domination worthy of an elite team. Kirby Smart has his Bulldogs on track as an early contender. Georgia’s road win over Notre Dame looks better this week too. Road trips against Tennessee and Vanderbilt the next two weeks should show us exactly where Georgia is at, and whether this high level of play can be sustained late into the season.

So far, though, it looks like this season is shaping up to be very different than last. Last year, the top contenders built such strong resumes early that they could survive a loss and never even give up their top spots in the Playoff chase — as Ohio State, Washington, and Clemson all did. This year that does not seem to be the case, as there are clearly more than just a handful of teams building impressive early resumes.

Week 4 saw only seven eliminations. We did eliminate the entire MAC, though, which leaves San Diego State as the only remaining team outside the Power 5 plus the AAC. The AAC has some teams hanging around, which shows that it has achieved some separation from the other four Group of 5 conferences.

After that, though, we haven’t really seen eliminations in the Power 5. Part of that is due to a lower-than-usual number of P5 teams losing to Group of 5 teams, but a bigger part is the fact that they just aren’t picking up enough losses overall yet to be eliminated. As conference play kicks up in the coming weeks, though, we will see teams pick up losses and slowly eliminate themselves from the Playoff.

I want to talk about Rutgers. Yes, you read that right. Rutgers. I could not eliminate the Scarlet Knights until this week, which gives me a perfect way to explain how the process of eliminating teams works.

My job is not to predict games. I’m not guessing who will win or who will lose. I’m not projecting anything. I am looking at teams and their schedules and asking, “If this team wins out, does it still have a shot at the Playoff?” Rutgers winning out would be absurd. A $10 bet on a ten-game parlay of Rutgers’ remaining games (and a Big Ten Championship Game against Wisconsin) would probably pay out millions. It wasn’t going to happen. And yet, it’s not my job to assume that.

Rutgers running the table would have included wins over Ohio State, Penn State, Michigan, and Wisconsin. That’s a Playoff resume, even at 11-2. Some chaos might be necessary, but we see a moderate level of chaos most years. Therefore, Rutgers wasn’t eliminated until now, when it picked up its third loss.

It is still hard to eliminate two-loss Power 5 teams this early in the season. Most have enough big games remaining that an 11-2 resume would look very impressive. Also, this early in the season, so many games have the potential to be “big games.” Will Georgia’s November trip to Auburn be against a Top 10 team? I have no idea. It’s possible, though. As those possibilities get whittled down and resumes become clearer, it will be easier to eliminate two-loss teams. For now, though, most stay.

What to do with Florida State

It doesn’t look like Alabama will need any benefit of the doubt from the committee. The Tide looked dominant against Vanderbilt. If Alabama continues to play like that, it will be in the Playoff. But what if the Tide lose a game or two? Alabama’s otherwise-weak nonconference schedule is anchored by the hugely-anticipated season-opening victory over Florida State. The Seminoles now, however, are 0-2 after a loss to N.C. State.

Of course, Florida State is not the same team that played Alabama. The defense is still stout. The offensive line has some holes, but is still decent. The Seminoles lost their star quarterback, Deondre Francois, for the season with a knee injury late in the Alabama game. The game against N.C. State–Florida State’s first since that Alabama game–showed that this isn’t the same team without Francois. Unfortunately, Florida State will be without Francois for the rest of the season. The committee will be judging all of Florida State’s future opponents by the Francois-less version. But what about Alabama?

On the one hand, we can easily assume that Florida State is better with Francois than without. On the other hand, we can only really do that based on last year. Francois didn’t show us anything this year, because his only game was against Alabama’s incredible defense. He didn’t accomplish much in that game, though it stands to reason that James Blackman would not have done much better.

Then again, how can the committee possibly judge a team based on zero on-field evidence? Florida State seems like a four-loss team at best right now (the Seminoles probably lose to at least two of Louisville, Clemson, and Florida–not to mention games against currently-undefeated Wake Forest, Miami (Fl), and Duke). Florida State might sneak into the Top 25 at 7-4, but even one loss more than that and the Seminoles certainly won’t be ranked.

How can the committee basically project an entire season in order to determine Florida State’s value as Alabama’s opponent? Then again, how can they not? Alabama clearly played a better Florida State team than the one that played against N.C. State. At the end of the day, this is probably all moot. Alabama’s Playoff resume likely will not hinge on how good an opponent Florida State is. But the committee has to address cases like this, if only to set precedent. What should they do when this type of situation presents itself? There is seemingly no right answer, but there are probably a lot of wrong ones.

Unfortunately for the AAC, though, the best conference doesn’t always have the single best team, which is what determines the New Years’ Six bid. Right now, San Diego State is still that best team. The win over Stanford looks a bit better now, and a road win over Air Force is nothing to scoff at. The AAC is deeper and has more contenders but as of right now, San Diego State has the inside track. The MAC is essentially out of the race for now as Toledo failed to upset Miami. The Rockets could still be a contender at 12-1, but the MAC needs chaos in front of it without an undefeated team.

This is a story we’ll discuss more if the Knights beat Memphis this week, but UCF looks very strong. A blowout over FIU didn’t tell us too much, but manhandling Maryland should grab our attention. UCF had a game scheduled against Georgia Tech two weeks ago, but Hurricane Irma wiped that game out. Instead, UCF will only play 11 games, and added one against FCS Austin Peay to make up for one of the two canceled ones (the Knights will not play Maine next week, as originally scheduled, in order to make up a missed conference game).

Could the lack of another P5 game hurt UCF? How forgiving will the committee be? We’ll deal with these issues more if they become relevant, but it’s important to keep at the back of our minds for now.

Next week starts off great, with two undefeated Power 5 matchups on Friday. Neither Duke vs Miami (Florida) nor USC at Washington State was expected to be a major game, but when a ranked team travels to an undefeated conference opponent, you never know what can happen. In the Big Ten on Saturday, Penn State hosts an Indiana team that gave Ohio State fits in Week 1. How will the Nittany Lions respond after their nail-biter against Iowa? Also, Minnesota hosts Maryland. P.J. Fleck hype at Minnesota has slowed, but can he build it up as Minnesota has an easy early conference slate?

There will be more eliminations next week, as we have three elimination games. Vanderbilt vs Florida should essentially be an elimination game in the SEC. Arizona State at Stanford will give us our second Pac 12 elimination. There are several other games that aren’t quite eliminations, but are close to it. And, of course, we will see plenty of eliminations as teams on the fringe lose. The aforementioned UCF vs Memphis game will eliminate one of those two AAC teams.

Additionally, there are a ton of great conference games to watch. Will Alabama finally not struggle against Ole Miss? Can Virginia Tech unseat Clemson atop the ACC? How will Florida State recover? There are a ton of scenarios and implications to play out this week. But, as always early in the season, there are so many scenarios that it’s really impossible to know which games will end up mattering.

We’re past the season’s quarter-pole, though, so things are starting to coalesce. Next week we should know a lot more about our contenders, and it will only be a few short weeks after that before we can start pinning down individual scenarios.