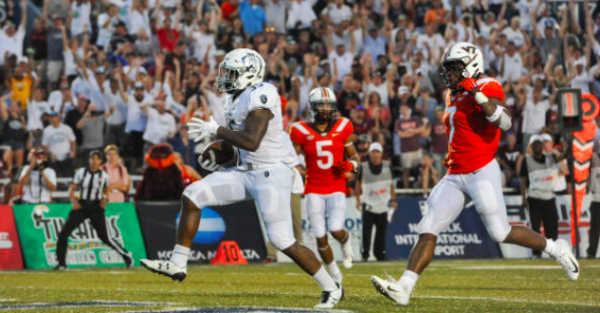 Last week, I noted that our potential second-tier of teams — meaning those teams who can step up into the Playoff picture if the top teams fell — was already thinning. We saw continued thinning this week, with the potential for so much more. Had Oklahoma fallen against Army, this conversation could be very different. The Sooners survived, though, and still look on track to be in the mix for a Playoff spot.

Had Oklahoma lost, on the other hand, we’d be looking at a Big 12 with no real Playoff contenders. West Virginia is still undefeated, but the conference’s members still really in the mix — Oklahoma State, Texas, and Texas Tech — have all suffered damaging losses already. If Oklahoma would join that mix, there would be very few quality win opportunities in conference.

The same phenomenon exists in the ACC. Syracuse, N.C. State, and Duke are all still undefeated, but none of those teams looks like potential contenders on a national scale. The three ACC teams that did before this week (aside from Clemson) — Virginia Tech, Boston College, and Wake Forest — all suffered very damaging losses this week. Like the Big 12, the ACC has one flagship and then little behind it.

The exact same thing has happened in the Pac-12. Stanford is carrying the banner, but after the Cardinal it’s slim pickings when looking at potential Playoff contenders.

So what does this mean? It means that if we see Clemson, Oklahoma, and Stanford slip, we could see three power conferences without any real CFP contenders when the season ends. Who would that be good for? Notre Dame would love it- and the Irish get a say in the matter, as they face Stanford this coming week.

It also opens up some fascinating possibilities. It’s way too early to speculate on very specific scenarios, but we’ll suffice that a two-conference final four — of Alabama, Georgia, Ohio State, and Penn State — is not outside the realm of possibility right now.

And UCF and USF — two currently-undefeated AAC teams who will meet on the final weekend of the regular season — have to be looking at the potential chaos building up and wondering if this might just be their year to get a shot. It takes sustained success along with a chaotic year for a Group of 5 team to have a chance. UCF and USF both finished 2017 ranked. With enough chaos this year, they may get a serious look when November rolls around.

We started this week with 69 teams still remaining. Ten eliminations this week now puts us at 59, with several more teams all but done. Expect to see the Power 5 eliminations heating up in the coming weeks, especially in the Big 12, Pac 12, and ACC.

The Group of 5 race seems settled for now, with no real challengers to the AAC twosome of UCF and USF. Very few people are expecting either of those to lose until they meet- and even if they do, a one-loss USF or UCF probably gets the Group of 5 bid anyway. If either team collapses, though, or if there is an upset in the AAC Championship Game, there are a few teams shuffling to the head of the pack.

North Texas looks very, very strong out of Conference-USA. If the Mean Green drop a game or two, or fail to win the conference, it’s hard to see any other Conference-USA team getting the New Year’s Six bid. The Sun Belt is all but out of the race, unless Appalachian State can run the table. A 12-1 Appalachian State team — whose only loss is to Penn State in overtime — would have a strong claim on an NY6 bid.

This week, though, I want to focus on the MAC. Few gave Buffalo a chance at anything, well, ever. The Bulls hired Lance Leipold, fresh off six Div. III titles at Wisconsin-Whitewater (in eight years). Leipold has worked his magic, as Buffalo is now 4-0, with some (relatively) strong wins. I don’t know if this team can run the table, but as of right now the Bulls have to be considered one of the top few Group of 5 teams, at least in terms of resume. The MAC will also have a chance to impress next week, as Toledo travels to face Fresno State, last year’s Mountain West runner-up.

We start to get into the meat of conference play in Week 5. In the vast majority of cases, the best thing for the conference is if the favorites win. Upsets in conference — especially by those with non-conference losses — hurt the top-end win quality of everyone in the conference. For example, if winless UCLA would upset undefeated Colorado on Friday, every Pac-12 team that plays Colorado will be facing a less valuable opponent. UCLA is already a low-value opponent (from a P5 perspective), so a win over UCLA adds far less value than a win over Colorado.

On Saturday, West Virginia vs Texas Tech will tell us a lot about whether either team is ready to be a Big 12 contender. Texas Tech just throttled Oklahoma State, a team that looked very impressive in its first few weeks. I have only eliminated one team from the Big 12 so far, but that will change rapidly as teams start beating each other up and picking up losses. It’s in the conference’s best interests for the best teams to win, because Big 12 teams have the least margin of error of any P5 conference.

Boston College, who last week looked like a potential contender, is coming off a bad loss to Purdue. The Eagles will face Temple, a team that got off to a rough start but has already derailed Maryland’s season. Several other ACC games (like UNC vs Miami and Syracuse vs Clemson) have limited upset potential. As discussed above, the ACC really can’t afford too many losses by its top teams. Every upset in conference is a potential disaster now.

The same is true for the Pac 12, which has two huge non-conference games this week. BYU has already all but torpedoed Wisconsin’s Playoff hopes. The Cougars will look to do the same against Washington this week. The Huskies are clearly talented, but have seriously struggled in their last two games. Also, Notre Dame hosts Stanford in a matchup of top-10 teams. The Pac-12 generally can’t afford losses by its flagship teams. This year, though, with the number of non-conference losses, the Pac 12 has no margin for error.

And late at night, Fresno State hosts Toledo. As I said, the AAC already has a stranglehold on the Group of 5 NY6 bid this year. Should that conference somehow falter, though, this game could go a long way towards determining whether the MAC or Mountain West gets the bid.