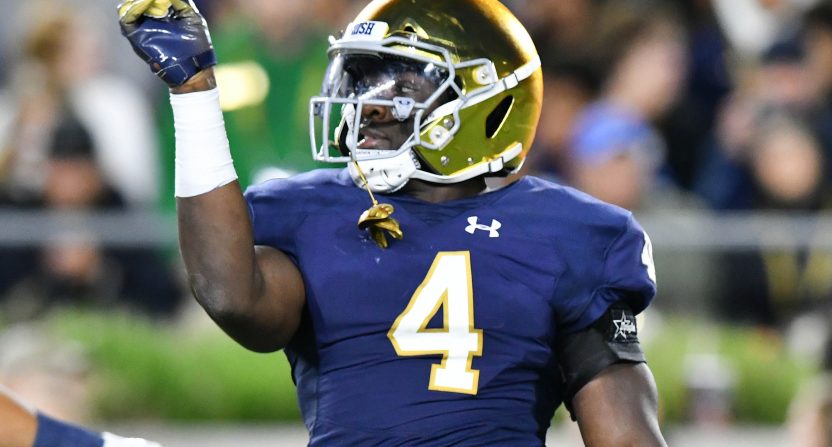 Two weeks ago, I pointed out that we were already running out of “second tier” Playoff contenders. These are usually the teams that are good enough/have strong enough resumes to make a Playoff push if the top teams slip up. If Ohio State, Clemson, and Georgia lose a game (or two), what teams are out there that can get in to the CFP?

We’re not even halfway into the season, and we finally have our answer. The top teams of Alabama, Georgia, Ohio State, Clemson, Oklahoma, and Notre Dame all but control their own Playoff destinies. (Don’t worry, we won’t see five of these go undefeated; someone always loses a game.) What if too many teams from this group fall? Well, we know who’s right behind them–and the group is tiny.

A one-loss Pac 12 champion, Penn State, West Virginia, Syracuse, Auburn, LSU, Wisconsin, Texas. That’s our list. Now, there are obviously a few more undefeated teams out there. If any P5 team runs the table, they’re in. That has always been–and will always be–the unofficial rule. Don’t worry about them. Similarly, if Michigan or Michigan State (or Maryland) can run the table and win the Big Ten, they’ll be in as well. But among the remaining teams, these are the ones with the resumes to challenge a one-loss Alabama, Georgia, Ohio State, Clemson, Oklahoma, or Notre Dame. The list is tiny, and it will shrink as these teams lose games in the coming weeks.

This list being so small has to have a profound impact on UCF. The Knights look like a top team, and without too many teams in front of them could have a real shot this year. They are certainly well behind the six elites (and LSU) listed in the opening paragraph. But coming off an undefeated season last year, it will be hard to keep UCF out if three of those six lose two games. It’s still a little early to talk about this in-depth, but if both UCF and USF are still undefeated when November hits, we’ll have to take the AAC’s talk of a “Power 6” very seriously indeed.

We started this week with 59 teams still remaining. Ten eliminations this week now puts us at 49, with several more teams all but done. There are very few Pac 12 teams with any realistic chance, though, which I’ll get to later.

It was obvious after Week 1 that the Pac 12 was going to have some serious trouble this season. The woes continued as more teams lost non-conference games in the following weeks. Now, with Stanford losing to Notre Dame, the coffin is all but nailed shut.

Things are not completely done yet. The unexpected always happens in college football. But we now know exactly what the Pac 12 needs to get in the Playoff. There is one–and only one–real path. Colorado, Stanford, or Washington needs to run the table. Colorado is a virtual lock at 13-0. Washington and Stanford will very likely be in at 12-1, though they might need some help. Any other 12-1 team–Oregon, Cal, or Washington State–would have a solid resume, but would need a lot of help from the teams ahead of them losing.

I did not eliminate every two-loss Pac 12 team (in fact, I have not yet eliminated any), but that is just a bit of caution on my part. There’s no real reason for it. The losses will spread around the conferences, and there just won’t be quality wins. Every two-loss Pac 12 team is done–with the possible unrealistic exception of USC if the Trojans start blowing everyone out now. The deck was stacked against the Pac 12 to start the season, and the conference just didn’t win enough to fix that.

As I said before, there are currently six elites in the CFP race. However, there is really a seventh. Penn State lost to Ohio State by one point in a game the Nittany Lions dominated. It will take a lot for the Big Ten to get two teams in the Playoff–at the very least, three of the aforementioned elites must lose one game, probably two. But if the conference wanted to put two teams in the Playoff, that was the way to do it. If the Buckeyes run the table (or even lose just one game, depending on which game) and Penn State finishes at 11-1, the Nittany Lions will have as strong a case as anyone.

With the losses by Buffalo and North Texas this week, we are once again all but officially down to the Mountain West and AAC. Both conferences have some strong teams at the top, and each have noteworthy wins. Fresno State’s domination of Toledo was a statement for the conference. Boise State (over Troy) and San Diego State (over Arizona State) already have big wins. The Mountain West Conference is doing very well.

Unfortunately, that’s not currently enough to compete with UCF and USF out of the AAC. Memphis’ woes will give the Mountain West a chance if we see an upset in the AAC Championship Game, but until USF and UCF slip, the New Years’ Six bid will be firmly in the AAC’s hands.

Don’t forget about Appalachian State, either. The Mountaineers don’t have significant wins, and likely won’t get any, but their only loss was in overtime to Penn State. It will take some chaos to get Appalachian State the bid, but we’ve seen crazier in the past.

Week 6 doesn’t have too many games between contenders. In fact, there are only three battles between ranked teams. But there’s plenty more that can affect the Playoff picture. Upsets are always possible–Notre Dame and Clemson are each on the road against solid opponents. (Alabama is on the road too, but it’s hard to see Arkansas as a threat right now.) More importantly, though, some of our second-tier contenders play losable games. Auburn is on the road against a Mississippi State squad that would love to end a two-game losing streak. LSU has to face Florida in the Swamp, an always-difficult prospect.

On top of those games, though, we have two games that can add teams to our list of second-tier contenders. Maryland travels to Michigan, to face a team that just struggled with Northwestern. Maryland has a brutal upcoming schedule, but could be a very quality win for Ohio State and Penn State if the Terrapins keep winning (especially if Texas also keeps winning, and the Longhorns face Oklahoma this week). Iowa also can get some more respect with a win over Minnesota–whose win over Fresno State looks better and better.

On paper, there aren’t too many major games coming this weekend. We’ll have to see if the weekend exceeds our expectations. It usually does. At the very least, we should finally learn how legit Kentucky is, as the Wildcats travel to Texas A&M. That should be a fun one.