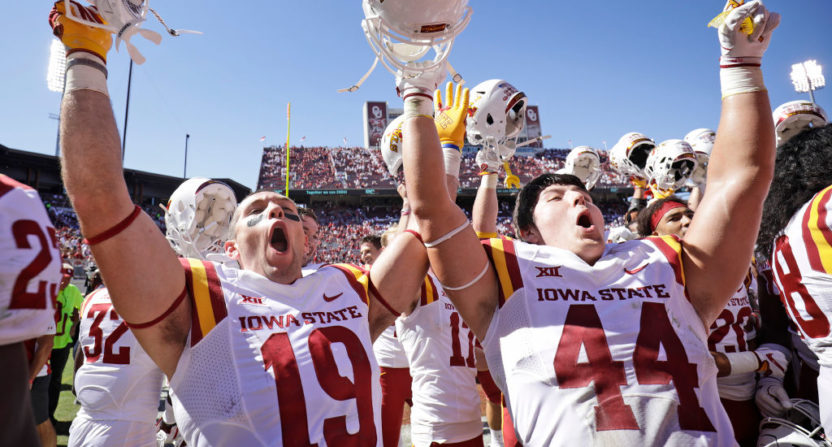 Last week, I mentioned that the Pac-12 was the conference at the most risk at the time. That’s still mostly true, although Washington State backing up its big win over USC with a dominant performance against Oregon gives the conference a little more leeway. Still, the Pac-12 is more likely than not looking at having a two-loss champion, which could be difficult when playoff selection comes around.

With Oklahoma’s shocking loss to Iowa State this week, the Big 12 is in a similar boat. An undefeated TCU team or a 12-1 Oklahoma team is still probably in prime playoff position. However, those teams have to play each other once, and probably twice. If those games don’t go the Big 12’s way, the conference could have problems. If Oklahoma gets upset even one more time, and if TCU drops a game before facing Oklahoma, the conference will be in big trouble when playoff selection rolls around. Texas Tech is also in the mix with only one loss (and two solid nonconference wins), but no one is expecting the Red Raiders to win out at this point.

While we are discussing conference doomsday scenarios, the ACC and SEC are not far away from their own. Both conferences are very safe right now, but an upset loss by Clemson (for the ACC) or Alabama (for the SEC) will very quickly change that. Both Clemson and Alabama probably have a one-game lead on the field right now, but anything can happen in college football. As these doomsday scenarios go, the Pac-12 and Big 12 are clearly in much worse position than the SEC and ACC.

We’re starting to pick up the eliminations. Weeks 4 and 5 saw only seven eliminations each. This week, we say goodbye to the playoff dreams for ten more teams. We only have 43 teams remaining in playoff contention, with many of those hanging on by a thread. We are still at the awkward part of the season where Power 5 teams are picking up losses slowly, but there are still so many scenarios for good wins that I can’t eliminate teams. Part of that is due to a lower-than-usual number of P5 teams losing to Group of 5 teams earlier in the season, so there still aren’t as many losses as usual (and they aren’t as bad) in the P5 conferences.

That should not last long, though. Teams are losing, rankings are solidifying, and scenarios are shrinking. Starting next week, it will be much easier to eliminate two-loss teams. Some won’t be eliminated anytime soon–Stanford at 11-2 would be a serious playoff contender, for example–but we should be able to get rid of most of them soon.

(Teams eliminated this week are italicized.)

It is still too early to eliminate most two-loss P5 teams, but we’re getting there. Every team is evaluated on its own, but my general rule of thumb right now is that a two-loss team needs to be able to pick up at least three Top 15 wins to remain alive.

So, for example, West Virginia is eliminated, even though the Mountaineers have two pretty good losses. However, Iowa State’s upset of Oklahoma means that West Virginia can’t pick up any Top 10 wins (except for a rematch against TCU in the Big 12 CCG), and has very limited chances at ranked wins. If TCU is to go 12-0, then either Oklahoma or Oklahoma State will have to finish with four losses, or both with three losses. Either way, there are not enough quality wins in the Big 12 for West Virginia to have a real playoff shot.

Also, two preseason ACC powers have been eliminated early this year. Florida State, after losing quarterback Deondre Francois in the season opener, is eliminated after dropping its third game. Louisville only has two losses, but the best remaining win on the schedule is against either Kentucky or Virginia. That isn’t enough to get Louisville into the playoff, even if the Cardinals can somehow win the ACC.

Group of 5 race down to two

Okay, so I’m kind of ignoring Troy for the moment at my own risk. Aside from the fact that I don’t see the Trojans running the table, I also don’t see LSU winning enough games to make an 11-1 Troy a viable New Years’ Six choice. The MAC and Conference-USA are also basically out of it, though Toledo or Western Michigan running the table could make it interesting.

No, it’s between San Diego State and the AAC right now. The Aztecs have a huge win over Stanford, which right now is looking very strong–though that can easily change as the Cardinal still has to face all three of Oregon, Washington, and Washington State. SDSU, with star running back Rashaad Penny, still has the inside track in terms of playoff resume, but the UCF Knights are coming on fast.

UCF is dominating teams the way that USF was expected to in the preseason. The Knights are dominating teams, even solid teams, the way that was required of Boise State and TCU back in their BCS-era heydays. If they keep this up, they’ll pass San Diego State, even though the Knights have fewer quality wins. The AAC also has several other undefeated contenders (USF and Navy), as well as a one-loss Houston team with a solid resume.

We need to watch out for what the committee does with South Florida when the initial rankings come out. USF is getting a lot of respect in the human polls (moreso in the Coaches poll than the AP), but the committee has shown willingness to break with the polls when there is an extremely weak SOS involved, which is what USF has. The Bulls haven’t played anyone good yet, and won’t until the end of November.

The Wolverines just lost any leeway they might have had in the playoff race, but that won’t matter much at the end of the day. If this team wins out, it’s basically guaranteed a playoff shot (unless Michigan State somehow also runs the table, which seems incredibly unlikely). If Michigan drops another game, it won’t be in the playoff. It’s that simple.

What this upset does do, though, is raise the profile of the Big Ten East even more. The division was known to have three of the country’s top teams. Someone will pick up at least three losses, but as of now the division has four ranked teams, and the Spartans look like they won’t lose another game until at least November. The division could very well have four ranked teams (all in the Top 15-20) by the first week of November, which means that the committee will probably be very forgiving if a one-loss team makes its way through the division.

For starters, the Group of 5 race hinges on Boise State’s late trip to San Diego State Saturday night. The Aztecs don’t have another possible loss after that game until the Mountain West Championship Game. On the other end of the country, there is a major AAC game between Memphis and Navy, as the two jockey for position in the conference. The winner of that game will be anxiously rooting against San Diego State late that night.

Also late at night, Stanford and Oregon square off in a playoff elimination game. And Washington is once again kicking off at 10:45 PM Eastern, much to Head Coach Chris Petersen’s chagrin. A little earlier, Utah and USC will face off with the inside track to the Pac-12 South title on the line.

In the ACC, Miami (Fl) and Georgia Tech meet in a game that seems like it could determine the Coastal Division, with Virginia Tech also in the mix. TCU travels to Kansas State in a game that will either eliminate the Wildcats or be disastrous for the Big 12. Similarly, the Red River Rivalry (Shootout) will either eliminate Texas or spell huge trouble for the conference.

The SEC will also see an elimination game this week when South Carolina and Tennessee meet. Auburn at LSU isn’t quite an elimination game, but Auburn probably needs a dominant win to stop its profile from slipping–otherwise it’s not much more impressive than Mississippi State (or Troy). Texas A&M was eliminated this past week (there just aren’t enough good wins left on the schedule), but the Aggies can officially knock Florida out of the playoff race with a win.