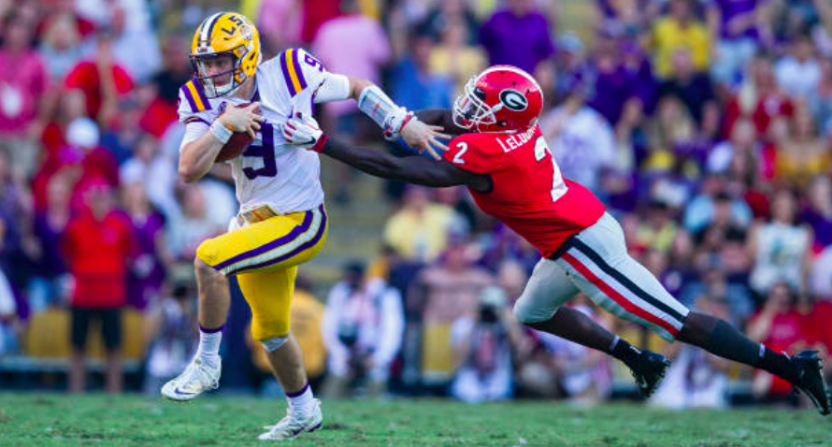 The common theme this week is that chaos has arrived. Georgia lost, Penn State lost, West Virginia lost, and Washington lost. That’s four Top 10 teams losing in one week. Add in Miami (FL)’s loss to Virginia, USC’s upset of Colorado, and Auburn getting knocked off by Tennessee, and that sounds like a good amount of chaos.

The point is, we came very close to seeing an insane amount of chaos. Had that come to pass, 2007 would no longer be the most chaotic year in modern college football. Not even close. What this tells us –other than how awesome college football is — is that our top teams are not elite this year. Some teams have solid resumes, but they’re all highly susceptible. No one (except Alabama, at this point) can really be seen as safe. Every team should be on upset alert most weeks.

And that only means one thing. Chaos may have started, but more is coming. Far more.

Buckle up, because we’re in for a crazy close to the season.

We’re slowly reaching a point where I may need to adjust my benchmark. We could soon start running out of one-loss teams, which would put us above 2007 levels of chaos. I’ll keep an eye on that, but it’s too early to start un-eliminating teams- and I hope I’ll never have to.

We entered this week with 41 teams still alive. Eight eliminations (TCU, Minnesota, South Carolina, Indiana, Auburn, Washington, Missouri, and Miami) puts us at 33 teams remaining. Several of those 33, though, are barely hanging on.

This year is becoming a difficult one, as many teams’ potential best resumes are not even close to Playoff-worthy in a usual year. Moreover, we are getting very close to a point where both the Big 12 and Pac-12 have no Playoff-worthy resumes. As it is, only Oklahoma, West Virginia, Texas, Colorado, and Washington State have a chance at real Playoff resumes from those conferences. If those five teams lose another game — and losses by at least two of those are already guaranteed — we won’t have any worthy Playoff team from those two conferences.

This brings up quite a dilemma for the selection committee. If two Power 5 conferences miss out, that only leaves three options for the fourth Playoff spot. Either a conference gets two teams in — and that possibility took a major hit this week with both Georgia and Penn State losing — or Notre Dame gets in, or a team from outside the Power 5 gets in. Notre Dame almost ruined its chances against Pitt, but a late win kept the season alive.

That means that UCF — if the Knights can run the table without any more close calls like this week — has a real chance at the Playoff. If not the Knights (or an 11-1 N.C. State team), it’s very possible that we’ll see a two-loss team make the Playoff for the first time ever. That could be a two-loss Big 12 champion, or possibly a two-loss Big Ten or SEC team.

Of course, there are scenarios that make life easier on the selection committee. If Michigan wins out, then an 11-1 Ohio State team is a solid choice (assuming Notre Dame doesn’t get in). Or if Georgia wins out, 12-1 Alabama should be a near-lock for the Playoff. There’s still a lot of season to be played, so let’s not get too far ahead of ourselves.

I’ve been keeping quiet on this subject because there’s not too much to say. The AAC is currently running away with it, as the leaders in each division are the top Group of 5 teams. If we see AAC chaos, though, there are some teams waiting in the wings. Appalachian State, San Diego State, and Fresno State all have solid resumes. UAB, North Texas, and Buffalo each have records that will draw some attention, though no true resume to back it up. UAB actually has a November game against Texas A&M, so a win there could draw some serious attention.

Week 8 is full of big games, and it starts first thing on Saturday. Michigan and Michigan State battle in what’s essentially an elimination game, though I’m going to wait a week or two to eliminate the Wolverines if they lose. Still, this will go a long way towards determining the Big Ten pecking order. Maryland and Iowa, meanwhile, do play a true elimination game. Don’t sleep on the Hawkeyes. If they win out, they would be considered locks for the Playoff. That nonconference win over Iowa State looks better now too. The ACC will also see an elimination game, as Virginia attempts to follow up its upset of Miami with a trip to Duke.

Oklahoma travels to TCU to take on a reeling Horned Frogs team that would love a big upset to right its season. Oklahoma losing would be disastrous for the entire Big 12, though. In the afternoon window, N.C. State and Clemson meet in a battle of unbeatens. Colorado’s trip to Washington looks much less meaningful than it did a week ago, though Oregon’s visit to Washington State at night (important enough for a GameDay visit) is going to be a great elimination game.

At night, LSU hosts Mississippi State. The Tigers will try to follow up their upset of Georgia with a game against another ranked team. It’s hard not to look ahead, though, as Alabama is up next afterwards (after a bye week) for LSU. Staying in the SEC, Vanderbilt looked good against Florida this week but couldn’t hold on. The Commodores will get another chance against a top SEC opponent when they visit Kentucky.

And, in possibly the biggest Conference-USA game of the year, UAB and North Texas square off. The loser of that game is entirely out of the Group of 5 race. The winner might still have a chance, if the AAC leaves an opening.