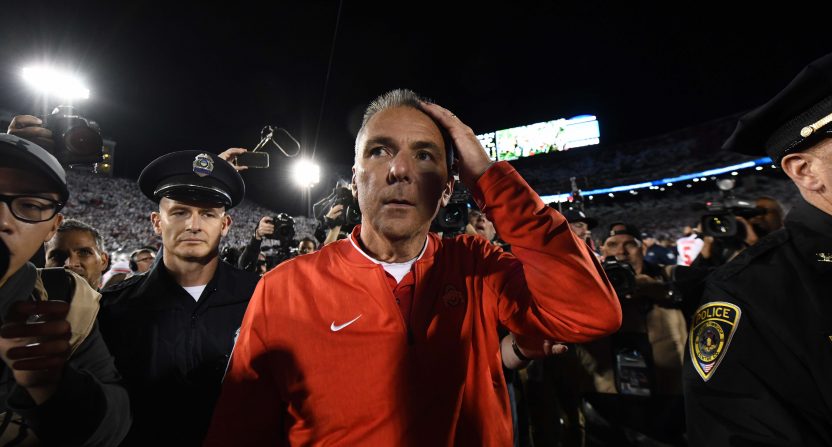 We could keep going and never quite describe what happened to Ohio State on Saturday night. It was, without question, the worst loss of Urban Meyer’s career. Far worse than the 31-0 loss to Clemson in 2016, or any of his losses at Florida. That’s not really up for debate.

What is a valid question, though, is whether Ohio State still has a shot at making the College Football Playoff. That debate is very much alive. Of course, before we can discuss Ohio State’s chances, we have to acknowledge that unless the coaching staff and the team make some major fixes, more losses are coming and this debate won’t last much longer.

As of now, however, we can ask where Ohio State stands. A very embarrassing blowout loss to Iowa last year kept the Buckeyes out of the Playoff. Will a similar loss at Purdue this year do the same?

First of all, we have to acknowledge the major difference. Last year’s Ohio State team had two losses; so far, the Buckeyes only have one this year. That second loss has always been damaging in the selection committee’s eyes; no two-loss team has made the Playoff so far. Georgia and Alabama both had pretty embarrassing losses to Auburn last year. That didn’t stop either team from getting in. Then again, last year’s Auburn team was significantly better than Purdue is this year.

Ultimately, it comes down to who the other options are. If Notre Dame, Clemson, and Florida or Georgia win out, then the Buckeyes won’t be in (assuming Alabama enters the SEC Championship Game undefeated). Ohio State will be stuck at No. 5 if there are four better options. Luckily for the Buckeyes, that is the only scenario that provides four better options. (12-1 Clemson or 11-1 Notre Dame could also stay ahead of the Buckeyes, but it’s far from a given.) As long as that doesn’t happen, the Buckeyes should feel pretty safe at 12-1. Of course, with the way they played this week, the Buckeyes shouldn’t feel safe about anything–and they definitely don’t want to see Alabama in the Playoff.

We’re slowly reaching a point where I may need to adjust my benchmark. We could soon start running out of one-loss teams, which would put us above 2007 levels of chaos. I’ll keep an eye on that, but it’s too early to start un-eliminating teams–and I hope I’ll never have to.

We entered this week with 33 teams still alive. Seven eliminations (Cincinnati, Maryland, Michigan State, Oregon, USC, Colorado, and Mississippi State) puts us at 26 teams remaining. And I haven’t eliminated Houston yet, but they’re out.

And then there was one

We are down to just one team still alive in the Pac 12. Washington State is the conference’s only remaining one-loss team. Also, unfortunately for the Pac 12, Washington State played just about the worst nonconference schedule in the country. Unless the Cougars can win out–and do so convincingly–it doesn’t look like we’ll see a Pac 12 team in the Playoff, for the second straight year.

There is a bright side for the Pac 12, though. If the Big 12 sees just a little more chaos and Ohio State remains in free-fall (or Clemson collapses), we could see a two-loss team get in the Playoff. An 11-2 Utah or Washington team could have a pretty decent resume. If we get to the point of chaos that makes 2007 look like a normal season, the Pac 12 might become un-dead. Of course, that’s a very long way away and would take a lot of upsets, but it’s on the table.

Pac 12 fans, root for Northwestern or Purdue to win the Big Ten. That’s your path back to the Playoff.

Group of 5 race getting crazy

The AAC is the best Group of 5 conference this year. It’s not even close. UCF and USF are by far the best Group of 5 teams. As of now, Houston is probably third. Unfortunately for the AAC, Houston and USF play each other this week. If USF wins but Houston comes back and wins the conference, it could open the door for some other teams.

And, in what has not happened in the CFP era, every conference has a team with a case. The Sun Belt has Appalachian State (only loss in OT against Penn State) and Georgia Southern (only loss against Clemson), who play this weekend. The MAC has Buffalo (only loss to Army). The Mountain West has a trio of teams (Utah State, only loss to Michigan State; Fresno State, only loss to Minnesota; and San Diego State, only loss to Stanford), plus Boise State, which always gets some name value boost. Conference-USA has UAB, whose only loss is a bad one to Coastal Carolina–but the Blazers are such a good story that that can be overlooked.

Just like chaos happens with the Power 5 teams and we don’t get more than two undefeated teams just about ever, the same principle is true for the Group of 5. We won’t end up with a one-loss champion from every conference. It’s more likely that every Group of 5 champion has two losses than it is for all to have one. But it’s going to be very fun the next month to see where and how these one-loss teams fall.

On Friday night, Miami travels to Boston College. I have already eliminated the Hurricanes, but the Eagles are still (barely) alive, and this game will show if they can challenge Clemson. Also, Utah visits suddenly-tough UCLA. If the Pac 12 wants to dream of a resurrection, Utah can’t lose again, except maybe to Colorado.

Saturday starts off strong, with four impactful noon games. Clemson travels to Florida State, as the Tigers try to continue their impressive recent performances. Wisconsin visits Northwestern, and the winner will control its own Big Ten West destiny. At the same time, Purdue visits Michigan State. The Boilermakers also only have one conference loss, and will want to keep pace with the Northwestern/Wisconsin winner. Due to their poor nonconference showings, the Big Ten definitely does not want to see Northwestern and Purdue win. Also, Iowa State hosts Texas Tech, as the Cyclones will try to knock off another Big 12 contender.

The afternoon window sees three elimination games. Florida and Georgia square off for SEC East dominance, Iowa visits Penn State, and Houston hosts South Florida. Okay, so the loser of Florida-Georgia will likely not be officially eliminated this week, but they will definitely be well outside the Playoff picture for a while. Also, Kentucky will try to keep its incredible Playoff run alive on the road against upset-minded Missouri.

The night schedule is also packed with meaningful games. At 7 PM (Eastern), Syracuse hosts N.C. State in an elimination game. Texas A&M will try to keep its fringe Playoff dreams alive when it travels to Mississippi State. And Washington State travels to the Farm to face Stanford. A Cardinal win would eliminate the entire Pac 12 from Playoff contention, marking the earliest in the season we’ve ever eliminated a P5 conference. It would also mark the first time a Group of 5 conference has outlasted a P5 conference. (UCF is on a bye and will not be eliminated this week.)

Notre Dame and Texas also play potentially tough road games, though neither Navy nor Oklahoma State are quite up to their recent standards this year. Still, each team will be challenged, and both have looked vulnerable at unexpected times this year.

That’s one heck of a lineup, and the Playoff picture should see a ton of shakeup this coming week. It’s perfect timing, because the selection committee will release its initial rankings next Tuesday. They will get to see one last bit of chaos before releasing their initial outlook.