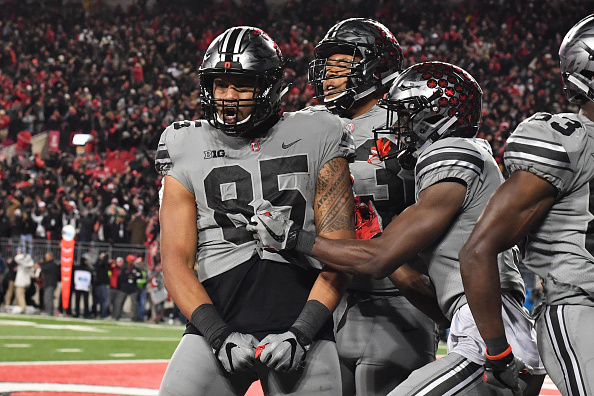 There will be a lot said in the coming weeks about the SEC’s chances of putting two teams into the College Football Playoff. If Georgia and Alabama both reach the SEC Championship Game undefeated, there would be a legitimate case. There will be others, though fewer of them, talking about the Big Ten’s ability to put two teams in if both Ohio State and Penn State win out.

Well, I’m here to tell you that neither should happen, but both are definitely possible.

Here’s the problem with both scenarios. Neither Penn State nor Alabama have the resume or quality wins to really deserve a Playoff bid without a conference championship. Penn State would have a maximum of two ranked wins, and it’s unlikely that the Nittany Lions will have even six wins over bowl teams. Wins over Michigan and Michigan State will be solid, though no longer great. The big problem is the dearth of quality wins after that. The next-best win after that is Northwestern, and there are probably no other eight-game winners on Penn State’s schedule.

Georgia has no resume problems. The Bulldogs have wins over Mississippi State and Notre Dame, and three of the final four opponents already have six wins. Georgia might only end up with two ranked wins if the Bulldogs lose to Alabama, but there will be plenty of quality wins over P5 teams after that — not to mention the win over Appalachian State.

However, if Georgia beats Alabama in an all-undefeated SEC Championship Game, things get dicey. Alabama currently has zero wins over bowl teams. In fact, two of Alabama’s three wins over five-win teams are against teams from the Mountain West Conference — both of whom just suffered awful losses this weekend.

Yes, three of Alabama’s final four opponents have six wins. But Auburn is very likely to lose two more, and we could easily see a 12-0 Alabama with zero ranked wins. The maximum, assuming an undefeated Georgia, is two ranked wins. That’s a hard sell to get a one-loss team that isn’t a conference champion into the Playoff.

Now, that’s what should happen in a normal year. This year, though, is not shaping up to be a normal year. Both the Big 12 and Pac-12 look like they’ll have weak resumes from every team. If the choice is between a two-loss conference champion and a one-loss non-champion — with neither having any strong wins on the resume — will the number of losses rule all? Quite possibly, but it’s certainly not the committee’s ideal.

A 12-1 Georgia team has a good case, but if Penn State or Alabama want to get in without winning a conference, they will need a lot of chaos to help them.

There were still 28 teams in contention as of last week. We eliminated four more this week, bringing us down to 24 contenders remaining. A few of these are hanging on by a thread, though, as Iowa State’s and Michigan State’s (and a few others) paths to the Playoff are increasingly slim.

South Florida was eliminated with its first loss of the season. N.C. State’s loss to Notre Dame eliminated the Wolfpack. N.C. State still controls its own ACC destiny, but it can earn a maximum two ranked wins on the season. Two ranked wins isn’t enough to overcome two losses. The further problem is that N.C. State’s best potential quality win is a 12-0 Miami team in the ACC Championship Game. But if that happens, then Miami’s resume will be better than the Wolfpack’s anyway, including a win over Notre Dame. Virginia was eliminated also, which was merely a formality.

Lastly, Washington State was eliminated with its loss to Arizona. The Cougars could theoretically end with four ranked wins, but the margins of its losses are too much to overcome, and none of those wins will be over Top 10 teams.

I was tempted to eliminate UCF as well. The Golden Knights lost their best chance at a major quality win. In a normal year, I would eliminate them at this point. However, the levels of chaos in the Big 12 and Pac 12 are both pretty high. We could definitely see the champions of each of those have two losses, without too many quality wins. That could leave room for an undefeated UCF to have a real case.

This doesn’t really need to be stated, aside from the fact that it needs to be stated. An 11-1 Notre Dame team is a Playoff lock at this point. It will have a better resume than a 12-1 Washington team. Notre Dame would have wins over eight bowl teams — and these aren’t your bare six-win bowl teams.

The Irish are looking at a minimum of seven wins over eight-win teams. Michigan State, USC, N.C. State, Miami (Florida), and Stanford are all currently ranked teams. Navy is receiving votes in the Coaches’ Poll. Even if these teams aren’t all ranked by the season’s end, they will all be respected as quality wins, and several of them will be ranked.

A 12-1 Clemson team could have a resume similar to Notre Dame’s, and splitting hairs between the two if Clemson goes 12-1 will not be fun for the committee. Parsing between a 12-1 Ohio State’s resume and 11-1 Notre Dame’s would also not be fun, but Notre Dame likely has the advantage there.

The only real scenario that could leave a doubt for Notre Dame is if Alabama is 13-0, Georgia is 12-1, Clemson is 12-1, and Wisconsin is 13-0 (or Ohio State is 12-1). Even in that case, Notre Dame has a better resume than Clemson (or Georgia, really, but head-to-head makes that tougher). It will be a nervous weekend in South Bend if this comes to pass, but Notre Dame will have a top four resume regardless. It would be controversial, but don’t be surprised if 11-1 Notre Dame is ranked ahead of a 13-0 Wisconsin team with only one ranked win.

Toledo is alive in Group of 5 race, but MWC is out

Boise State is a good team this year. It has an enigmatic loss to Virginia, and a heartbreaking one against Washington State that should have been a win. Even so, the Broncos are out of the Group of 5 race. It’s not their fault — bad losses this week by both Fresno State and Colorado State will seriously hurt Boise State’s resume. It was a pipe dream before this week, but now there is no chance.

The team that does have a chance, though, is Toledo. The Rockets have only one loss this year, a solid showing against Miami (Florida). The MAC is significantly weaker than the AAC, but USF’s loss this week has to give the Rockets hope. USF scheduled an atrocious non-conference slate, and avoids all the top teams from the AAC West on top of that. Right now, if USF and Toledo both win out, it will be tough to split hairs between the resumes. USF would have the better top wins — UCF and the AAC West champion are better than anyone Toledo has beaten. After that, though, Toledo’s collection of wins will be better than USF’s overall wins. How will the committee decide between the two?

I don’t expect either team to be ranked by the committee on Tuesday night, so we won’t get any indication immediately. But keep an eye on when and where both Toledo and USF show up in the committee’s rankings if they keep winning. It might give us an indication if Toledo really has a chance at a New Year’s Six bowl.

Thursday night MACtion will be the biggest game of the MAC season, not to mention a rematch of the game that started the whole MACtion craze. Also, it is the game that will determine whether any league can challenge the AAC for the Group of 5 bid.

Clemson and N.C. State face off in a crucial ACC Atlantic game. Notre Dame will be watching carefully, because a Wolfpack win would all but eliminate Clemson, and give the Irish a huge leg up over the Tigers. Virginia Tech and Miami meet in a pivotal ACC Coastal game, which also affects Notre Dame. The Irish will play Miami the following week, so a Hurricanes win would boost Notre Dame’s SOS.

In fact, if both Miami and N.C. State win, Notre Dame would be able to claim wins (assuming the Irish beat Miami) over both halves of the ACC Championship Game. (Neither Miami nor N.C. State can clinch their division next week, but it would be all but guaranteed.)

There are also pivotal Pac-12 games, as Stanford visits Washington State and Arizona visits USC. Both of those matter for the Pac-12 picture, as well as for Notre Dame. Right now, the Pac-12’s best hope may very well be to campaign to the committee that Arizona hit a reset button on its season when it started playing Khalil Tate at quarterback.

And, of course, we get Georgia vs South Carolina and Alabama vs LSU in the SEC. Both of these games are among the bigger chances of upsets remaining for these two teams. The path towards two SEC teams in the Playoff continues through these games.