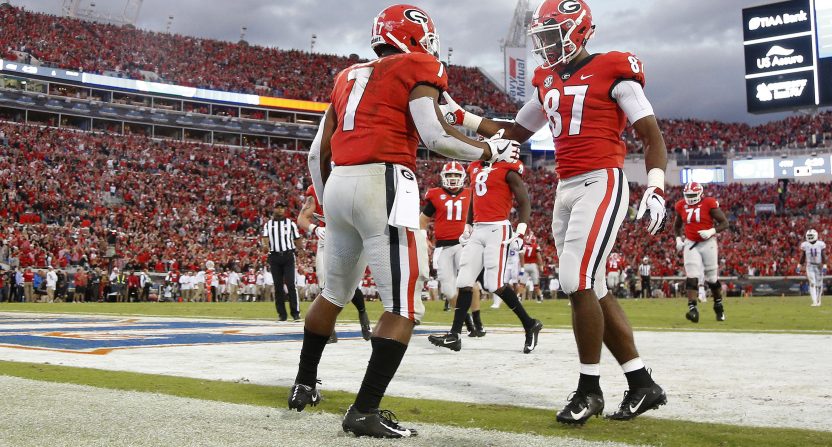 Every year, we reach a weekend where we can finally cap the true number of Playoff contenders. We’ve been whittling down the teams from the theoretical 130 to under 20 this week (see below). But, more than that, we are now at the point of the season where we can assess the contenders and what they need to do to make the Playoff. We can now talk about distinct paths to the Playoff for different teams. First, we’ll look at the 19 that are technically still alive. After that, though, we can get into the nitty-gritty of what these teams need.

We’re slowly reaching a point where I may need to adjust my benchmark. We could soon start running out of one-loss teams, which would put us above 2007 levels of chaos. I’ll keep an eye on that, but it’s way too early to start un-eliminating teams–and I hope I’ll never have to.

This might be obvious, but not all of the 19 teams remaining in contention have a good (or even half-decent) chance at getting in. Several of these teams are all but eliminated, and only remain in the race on technicalities. They all have paths to the Playoff–if they didn’t, they would be eliminated. However, N.C. State and Syracuse cannot make the Playoff without an ACC championship (and help from some other teams losing). They will be eliminated as soon as Clemson clinches the Atlantic Division. Similarly, Penn State needs a Big Ten title to be in the running. That would require an additional upset loss from either Ohio State or Michigan, and then for the right result when those two meet. It’s not impossible, but the Nittany Lions need everything to break perfectly to have a chance.

This is a group that some years I like to refer to as #TeamChaos. They have solid resumes, but they are not at the top of the Playoff pecking order. Iowa and Virginia are excellent examples of this. Each team is quietly building solid a resume. In Iowa’s case, it’s two solid losses and a win over Iowa State that’s constantly increasing in value. Add future games against Northwestern and a possible Big Ten Championship Game, and it’s a solid resume. Virginia, meanwhile, is just racking up wins over decent teams. None of the wins are eye-popping, but it’s a solid collection of wins with potentially more to come.

The problem for teams like this (and we can add Texas, Washington State, Oklahoma, and West Virginia to this list) is that they need help from teams in front of them. All of these teams have resumes that would lag behind Alabama (or any SEC champion, really), Clemson, Notre Dame, and Ohio State or Michigan. Some of these teams need more help than others, but they all need help in some way.

Lastly, we come to what I call the “first-tier contenders.” These means the teams that more or less control their own destinies. Alabama is an obvious one. The Crimson Tide have very few meaningful wins, but they have looked absolutely dominant this season. If Alabama wins the SEC, they’re a lock for the Playoff. In fact, at this point, any SEC champion that only has one loss should be considered a lock for the Playoff.

Notre Dame has a strong collection of wins that is getting weaker, but isn’t weak enough. An undefeated Irish team will obviously be in the Playoff. With the way this season is shaping up, 11-1 might be safe for Notre Dame, though Texas winning the Big 12 would help. Ohio State and Michigan are both “first-tier” contenders. Each should be considered a lock if it wins out (though if Alabama is the SEC runner-up things will get iffy). Ohio State’s resume isn’t the strongest (we’ll discuss that another time),

Clemson is an interesting case. The Tigers are often knocked for their weak schedule and lack of quality wins, but they have one of the best collection of wins of anyone in this group. Wins over Texas A&M, Georgia Southern, Syracuse, and N.C. State makes a far more impressive resume than, for example, Alabama has. Clemson should be a Playoff lock at 12-1. The Tigers have a one-game lead on the field at this point.

Many consider Oklahoma in this top tier of teams, but the Sooners really aren’t. They have no real quality wins to speak of, and two more wins over West Virginia (or one over each of West Virginia and Texas) won’t add too much. A comparison of the resumes between Oklahoma and Ohio State at the end of the season would be interesting, but based on how the committee usually views things (including their use of game-time rankings), Ohio State should have a distinct advantage there.

Just like last week, every Group of 5 conference still has some serious contenders. It’s hard to imagine any conference jumping ahead of the AAC, but the Mountain West is right on its heels, somehow. Each conference has two teams ranked in the major Top 25 polls this week. And while Houston and UCF are ahead of Fresno State and Utah State, a two-loss Houston team winning the AAC could open the door. Ironically enough, Boise State may very well be playing to spoil the Mountain West’s New Years’ Six hopes right now.

The MAC, Sun Belt, and Conference-USA each still have teams that the committee will look at, and comparing those resumes will be fun. It would take an incredibly unlikely amount of chaos for a team from any of those conferences to catch the AAC or Mountain West, though.

The Week 10 lineup is absolutely loaded. We have elimination games and potential resume-busting games all over the place.
Not only do we get two days of mid-week #MACtion, but UCF will face likely its toughest test of the season so far (against Temple) on Thursday night. On Friday, Virginia will try to keep its ACC Coastal (and CFP) dreams going while hosting an improving Pitt team.

At noon on Saturday, Ohio State hosts Nebraska. Don’t kid yourselves; this game will matter. After the way the Buckeyes played last week against Purdue, the committee will absolutely be looking very carefully to see if Ohio State is fixing its problems–especially on defense. Auburn vs Texas A&M, Michigan State vs Maryland, Oklahoma State vs Baylor, and Iowa State vs Kansas will all also matter. Every one of those games can seriously affect the perception of one–or both–teams involved (or some others by association), which can impact the contenders. For example, Ohio State would love to see Kansas start winning so that TCU’s loss to the Jayhawks doesn’t seem as awful. Texas, meanwhile, needs Oklahoma State and Maryland to keep winning so the Longhorns’ losses are more palatable.

In the afternoon window, Kentucky vs Georgia and West Virginia vs Texas are elimination games. (I might not officially eliminate West Virginia with a loss, but it would take some serious chaos–and a good ad campaign–for West Virginia to have a Playoff case with two losses.) I won’t be eliminating Michigan with a loss to Penn State, but that game is also a virtual elimination game, and will have major Playoff impact. Like I said above in the noon window, games like Boston College vs Virginia Tech, Florida vs Missouri, and Utah vs Arizona State could have serious impacts for a lot of teams.

At night, both Notre Dame (at Northwestern) and Alabama (at LSU) will take their undefeated seasons on the road. A Notre Dame loss won’t eliminate the Irish, but it will severely hurt. Alabama has been dominant all season, and a loss in this game probably won’t hurt the Tide much. Of course, it will remove any margin of error from upcoming games against Mississippi State and Auburn. Oklahoma will also take its Playoff dreams on the road against a good Texas Tech team. And last, but certainly not least, Washington State will try to keep the Pac 12’s Playoff hopes alive when it hosts Cal. The Golden Bears upset Washington last week. Can they do the same to a second school from the Evergreen State?