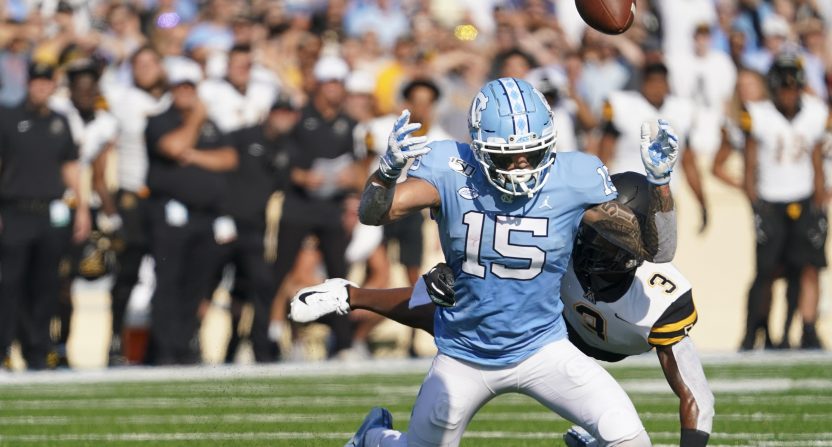 It seems we have been discussing the current state of the ACC on a regular basis lately, and for good reason. In Week 4 of the college football season, it was a bit of a roller coaster ride of emotion around one of the most regularly wide-open divisions in the sport, the ACC Coastal. On the same day Pitt scored a wild upset victory over No. 15 UCF, North Carolina lost at home to Appalachian State, Virginia struggled at home against Old Dominion and Miami was far from impressive in a home win against Central Michigan. In other words, it was just another week in the ACC.

Let’s start with a positive thought, and that was the performance of the Pitt Panthers. A week after coming up short on the road against Penn State with a puzzling coaching decision by Pat Narduzzi to kick a field goal late in the game, credit should be given to Narduzzi and the coaching staff for having Pitt fired up to play UCF. It sure looked like the Panthers were ready to start with a jolt, as the Pitt defense was swarming UCF from the jump. And the Panthers ran out to a stunning 21-0 lead before UCF got their offense going.

There was a lot of nervousness by the home faithful, however, as UCF went on a 31-7 run to take the lead in the second half. It looked like another disappointing loss for Pitt was incoming, but an offsides penalty by UCF on a Pitt 4th and 5 gave Pitt a shot. The drive continued with a free first down late in the fourth quarter, and the Panthers stunned UCF with a Philly Special-type play to tie the game.

After the game, Narduzzi attempted to re-brand the play as a “Pitt Special.”

If Pitt’s home win against UCF was the high-point, North Carolina losing at home to Appalachian State may be the low point of the weekend in the ACC Coastal. In no way is this a sign of disrespect for an Appalachian State program that has been one of the better Group of 5 programs not named UCF or Boise State the last few years, but the Mountaineers still recorded their first win in over a decade against a power conference team. The last time Appalachian State beat a team from a power conference was in 2007 with their historic win against Michigan. Granted, Appalachian State has come a long way as a program since that memorable upset, but to end that drought in their home state against one of the top schools in the state had to be pretty special.

Appalachian State even sealed their win over UNC in a similar fashion to their 2007 victory over Michigan, with a blocked field goal as time expired.

Stop us if you've heard this one before…@APPSTATE_FB TAKES DOWN A POWER FIVE PROGRAM ON A BLOCKED FIELD GOAL. pic.twitter.com/NPMWl1tt1v

Since starting the season 2-0 with wins against South Carolina (who dropped to 1-3 with a 34-14 loss at Missouri today) and Miami (who we’ll touch on soon), UNC has now dropped two straight games in non-conference play against in-state opponents. Remember, UNC lost a non-conference matchup against Wake Forest last week in a unique scheduling twist. Suddenly, the shine is off the return of Mack Brown, at least for now. But guess who UNC plays next. It’s Clemson, next week.

Virginia narrowly avoided an in-state disaster of their own as well. Old Dominion, who upset Virginia Tech last season and gave the Hokies some fits again this season, jumped out to a 17-0 lead in Charlottesville. Fortunately for Virginia, the Cavaliers regained control and managed to pick up a win. It would have been something if both UNC and Virginia lost on their home field to in-state opponents from non-power conferences on the same day that saw Pitt upset UCF.

So what about those Miami Hurricanes? It was anything but pretty for the Canes against Central Michigan. Holding CMU to 12 points is fine, but only scoring 17 point sin the game feels like a bit of a concern for Manny Diaz and his program moving forward. At one point, Miami fans were booing their team for what felt like a lackluster effort on offense, and who could blame them? Miami opened the season with that 24-20 loss to Florida and then came up short against UNC, but even many Miami fans aren’t convinced things are getting better after two straight wins against Bethune-Cookman and Central Michigan.

At least the ACC Atlantic Division stood up today. But who knows what next week will bring in the ACC?