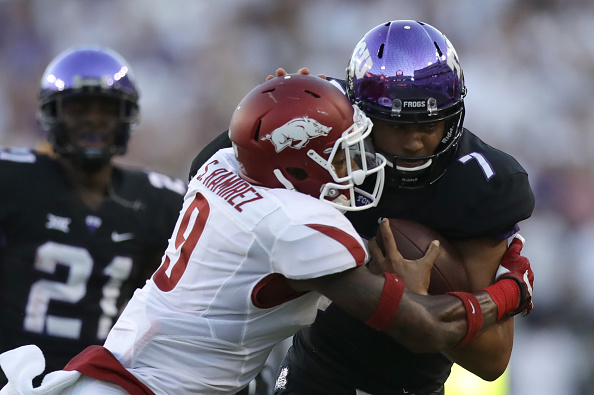 With Louisville–NC State already in the books, there’s only one game between ranked opponents this weekend. Regardless, there are still a number of intriguing matchups on Saturday, including a Big 12 clash between West Virginia and TCU, Michigan and Michigan State continuing their fierce in-state rivalry, and Washington State traveling to Oregon after the Cougars’ big win over USC last week.

Here is our weekly Friday collection of thoughts, observations and things worth paying attention to for Week 6 in college football.

** West Virginia–TCU is easily the best game of the weekend. This contest features two of the best quarterbacks in the nation in Will Grier (343.5 ypg, 13 TD) and Kenny Hill (72.6% completion percentage) Expect a shootout in this contest, as both teams rank in the top 10 nationally in scoring offense.

In order for the Mountaineers to pull the upset, they must complete at least 60% of their passes (as they did in last year’s 34-10 victory). Over the last two seasons, WVU is 10-2 when it hits this number and 2-3 when it doesn’t. That will be a tall task against the Horned Frogs D, which has allowed its opponents to complete just 47.9% of its passes this season.

TCU must continue to run the ball well to remain undefeated. Although the Horned Frogs use a balanced offense (929 yards rushing, 1,059 passing), they leaned a little more on the ground game against Arkansas and Oklahoma State. That should be the case this weekend against a West Virginia defense that ranks 117th nationally against the run.

Third down conversions could ultimately decide this contest. TCU leads the nation in this category, converting on 36 of its 57 opportunities this fall. Although the West Virginia D ranks just 37th in third down conversion defense, it did hold Virginia Tech to just 3-of-15 in the season opener.

** Stanford at Utah is the most underrated game of the weekend. It’ll be interesting to see how Bryce Love (217.6 ypg) fares against an aggressive Ute defense that is limiting its opponents to just 87 yards per game and 2.66 yards per carry.

Although that matchup deserves top billing, the flip side will determine which team wins the contest. Regardless of whether Tyler Huntley or Troy Williams is under center, the Utes will need to continue to throw the ball well (69.5% completions this season) against the Stanford secondary in order to get a “W.” While the Cardinal D has allowed its opponents to complete plenty of passes this season (65.9%), it also ranks 10th nationally in interceptions.

** Michigan State–Michigan also looks like a great game on paper, as both teams rank in the top 5 nationally in total defense. The Wolverines offense finally figured things out in the red zone last week, scoring touchdowns on all three of its opportunities. UM will need to make the most of these chances against a stingy Spartans D that’s only allowed eight red zone trips all season.

I’m interested to see how Brian Lewerke fares against the Wolverines defense this season. He provided a spark off the bench for the Spartans last year, completing 6-of-10 passes for 100 yards and a touchdown, allowing MSU to pull within striking distance.

** It doesn’t matter whether it’s Taylor Alie or Braxton Burmeister under center for Oregon, the key to beating Washington State is establishing the run. In the Ducks’ lone loss this season, they struggled to run the ball, rushing for a season-low 120 yards against Arizona State. In their other four contests, the team ran for no less than 200 yards, highlighted by a 328-yard effort against Cal last weekend.

While no one expects them to put up these types of numbers against Washington State, the Ducks need to at least run the ball effectively this weekend in order to have a chance. No one – including USC’s Sam Darnold – has had much success throwing the ball against the Cougar D this season. The Wazzu pass defense ranks 19th in interceptions, seventh in passing yards per game, and 7th in sacks.

** If you’re looking for an under-the-radar contest to watch – which seems highly likely given the huge lines in this weekend’s games – tune into SMU–Houston. The Mustangs offense is one of the most explosive units in the nation, averaging 300.2 yards per game. Although the Cougars defense has given up some yardage through the air, it has only allowed 5.6 yards per attempt (19th nationally) and has picked off six passes this season.

** Is the sky really falling at LSU? We’ll find out this weekend when the Bayou Bengals travel to Florida to face cross-divisional nemesis Florida. Should the Tigers fail to stop the Gator offense – which will be without starting quarterback Luke Del Rio – then it’s time for the LSU brass to hit the panic button.

** This week’s upset special is Florida State over Miami. Yes, I know that many people – especially Seminole fans – weren’t happy about the team’s lack of explosiveness against Wake Forest. However, it’s worth noting that the Demon Deacons D ranks 16th nationally in yards per play, limiting its opponents to fewer than five yards per attempt (4.46). Look for the ‘Noles to open up the playbook for James Blackman so that he can exploit a Hurricanes secondary that’s giving up 246.5 yards per game through the air.